I gave a Springfield Trapdoor to my daughter last Christmas. She named it “Baby”. Which is all fine and dandy. I think the name of the Henry Big-Boy in 45-70 is going to be “Impala.”

Because the Springfield was designed around a black powder cartridge 45-70 rounds labeled “Govt.” or “Government” are downloaded to be safe to fire in the Springfield. We received a number of 45-70 Govt. rounds when we purchased the rifle, just so we would have something to send down range.

This is OLD ammo. We sent four rounds down range and then waited for me to have the reloading dies before we loaded again for 45-70 Govt. I had picked up a box of 45-70 Govt from the Very LGS. I was a little worried about shooting it out of the Springfield but I was willing because I wanted the cases.

I picked up the Henry because I have an addiction to lever actions. It is a very modern rifle. Still wood but uses a ghost ring rear sight and is a fun rifle to shoot. I’ve sent about a half dozen rounds down range with it so far.

Then today I sent ONE +P down range. 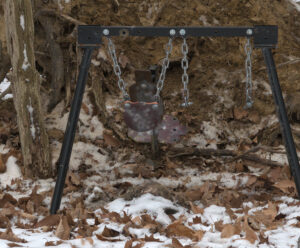 That SOB kicked harder than 7.62x54R or a 12 Gauge. I am glad it had a rubber pad on the buttstock. That round shoved me back even though I was firmly braced. It hit the steel plate and flung it straight back before it fell to the side

It pulled the carriage bolts through the plate. I forgot to check the plate for damage but oh my. 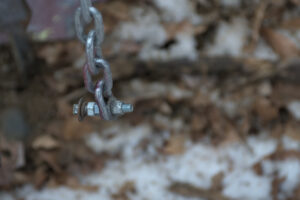 This is a powerful round. I love it. I’m not going to shoot much of it. 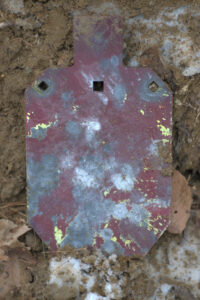 There are normally three plates back there. One 1/3 size man on the right which is my first shot plate. This is the plate that got ripped off its bolts

To the left is a 5in round. And behind that is 1/4 size man plate. When you are on the firing line the only thing you can see of that back plate is the “head” and top of the “chest”. To hit it you have to shoot over the round plate and between its chains.

This is my standard target when I’m just having fun. 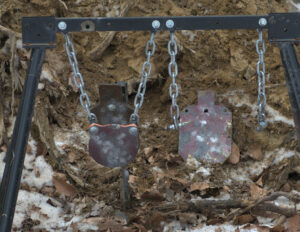