A Case from Spain: No Castle Doctrine, Shooting in the Air and Birdshot 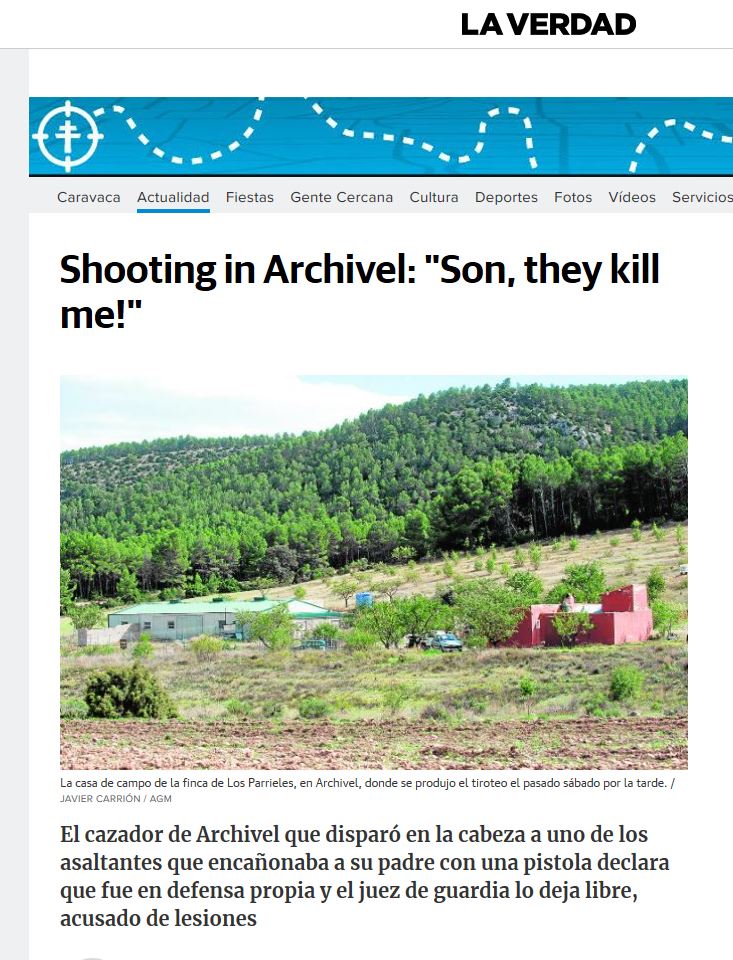 The link here will take you to a defensive shooting in the country side town of Archivel is SW Spain. Around 9 pm on October 12th, four criminals broke into the home of a local farmer with at least one of them and possibly two armed with guns. The son of the farmer who was coming from trying to hunt foxes being vermin, bumps into the four home invaders, shoots once in the air but no reaction from the invaders other than placing the gun at his father’s neck and threatening to kill him. Son then takes a ballsy step and unloads the shotgun on the face of the hostage taker who drops gun and tries  to follow his buddies who are now impressed enough to call it quits. Pellet face passes out before being able to leave the premises.

Police is called and they arrest son for grievously injuring and send the bad guy to the hospital to treat his face and eye from the action of the pellets. Two weapons are recovered from the scene: the son’s shotgun and the handgun from the home invader who happens to belong to a know crew who has been active in the area with at least two other home invasions in recent days. Son spends the night and next day (Sunday) in jail and on Monday, he is taken to the judge where a defense lawyer explains the situation and the judge releases the young man on parole but he cannot leave the area and must report with authorities every 2 weeks.

Castle Doctrine: Does not exist in Spain. The young man did a great job defending his father and will be treated like a criminal till hopefully the judge decides he is innocent of any wrongdoing.  Unfortunately that means he must spend money on a lawyer and have his regular life put on hold till the very slow gears of Spanish justice move with a verdict. A Florida Democrat introduced a bill just last week which eliminates Castle Doctrine from our laws and gives criminals a leg up for Home Invasions. Stuff like this is what we could expect.

Shooting in the air:  Ineffective and dumb. The article does not mention type of weapon, but I give it a 95% chance is a simple side by side shotgun which is the staple in the farms of all over Spain. The armed burglars are identified as “magrebies” which means they come from North Africa and probably used to gunfire noise from all the revolutionary events constantly happening in the area. They also probably knew that the law does not approve of Self Defense so they did not expect the son to put the contents of the remaining shell on the buddy’s face.

Birdshot:  This is a wild guess deduced by my experience in Spain (I don’t recall anybody owning buckshot or slugs,) the wounds and the fact that the burglar doe not have a canoe for head as Clint Smith says.  The young man probably had loaded that ammo since he was out hunting and he did what he had to do with subpar shells and the outcome was good.

That’s it.  Just a story with a happy ending (of sorts) and with teaching points that help us all.

3 thoughts on “A Case from Spain: No Castle Doctrine, Shooting in the Air and Birdshot”