A fleeting moment of hope… and then a crash. 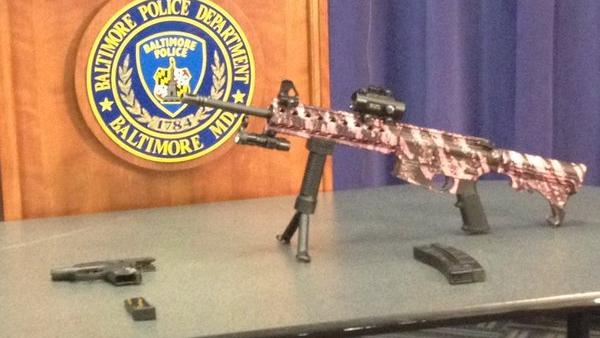 But on the ground, we still have a serious guys-with-guns problem and, in Baltimore, 150 people shot this year by the first day of April. Homicides are up by 11 percent over the same period last year, and last year was horrible. Even with the police effort — nearly 1,200 arrests for illegal gun possession in 2015, and at least 250 more so far this year — our city still crackles with gunfire.

In the aftermath of the killing by Baltimore police officers of the father and his teenage son as they stepped into East Lanvale Street on Thursday, consider this: Both of them had been arrested for firearms offenses, the father for a second time, within the last year. And the father, in particular, benefited from a state justice system that still treats gun crimes as secondary.

Source: What was this armed felon doing on the street? – Baltimore Sun

I was surprised: The Baltimore Sun aiming for the proper enforcement of the gun laws already in the books?

The father, 43-year-old Matthew V. Wood Jr. of Exeter Hall Avenue, had been arrested in October after police with a warrant searched his home and found a 9mm handgun. It was his second gun conviction. Wood, a convicted felon, pleaded guilty. He should have received a mandatory sentence of five years in prison without parole.

Instead, Baltimore Circuit Judge Alfred Nance sentenced Wood to time served awaiting trial, about three months. Nance apparently defered to prosecutors, who had agreed to “step off” the mandatory sentence. And isn’t that just great?

So Wood walked out of court.

There you go. Gift-wrapped with a bow and all and they just let the guy walk out of court.

But Wood got off easy. He appears to have benefited from the state’s willingness to toss aside a gun charge and a judge’s deference.

Imagine if Wood had been able to fire that rifle the other day. What would Baltimore State’s Attorney Marilyn Mosby and Judge Nance have said about the decision to let Wood walk with time served?

Good question, and the solution is obvious, right?

Baltimore Police Commissioner Kevin Davis has been calling for stiffer penalties for illegal gun possession. He does so in the midst of the great national awakening about, among other things, the collateral damage from mandatory minimum sentencing. Davis ran into resistance in Annapolis in his effort to increase the mandatory minimums for first and second convictions of illegal gun possession. He wanted a minimum of one year for the first offense, five for the second.

Dear God in Heaven! Is sending a guy to serve the time on a charge he pleaded guilty a difficult concept to grasp?

Not enforcing the laws we have in the book, Nay! WE NEED MOAR LAWS, Aye! Is that the way some politicians believe keeps the bad guys from doing harm? Or are we seeing the need to keep a city under siege as a political maneuver to ensure the perpetuation in power of a selected few?

Wait, it gets better:

“That practice has a pretty good track record and has wide support from community residents, so long as the policing is done fairly and legally,” Webster says. “But it’s demoralizing when police make arrests that are successfully prosecuted, and perpetrators get probation and are back on the streets, a risk to police and residents alike.”

This guy and the rest of “leading experts” should be nominated for the Nobel Prize for Obvious Shit. I can imagine a collective of the best and the brightest from the Johns Hopkins Bloomberg School of Public Health and the Johns Hopkins Center for Gun Policy and Research (This is where Webster really works) sift through the data:

-Dude.
-What?
-I just finished percolating and filtering the data.
-And?
-You are not gonna believe this. If you put away bad guys with guns, crime goes down.
-You are shitting me!
-Nope. I checked and double checked. Apparently if you arrest them, convict them and put them in prison, they don’t do crime outside.
-Dude! This is revolutionary!
-I know! Let’s publish a paper next week on that. Now it is time for strippers and pitchers of beer.
-Right behind you.

Then again, this is Baltimore, the city where the Mayor tells police to let rioters have a a space to destroy private property.

One thought on “A fleeting moment of hope… and then a crash.”