A little bit of history

Former president Bill Clinton was heckled again, while campaigning for his wife, about the 1994 crime bill and the issue of aggressive sentencing.  Clinton defended his seminal piece of legislation by claiming that he had to pass the sentencing increase to get the assault weapons and magazine capacity bans to pass .  He also claimed that it was the AWB that was responsible for the drop in violent crime after 1994.  Lastly, Clinton went on to walk back the sentencing guidelines that his bill had and praised Obama for undoing part of his bill.

This is not the first time that either Clinton has had to denounce the 1994 crime bill.  A few months ago both Bill and Hillary Clinton got into some political hot water over statements related to President Bill Clinton’s signing of the Violent Crime Control and Law Enforcement Act, also know as the 1994 Clinton anti-crime bill.  The issue started with Hillary Clinton being confronted by Black Lives Matter (#BLM) protesters about her defense of her husband’s signing of the anti-crime bill, and more specifically about her description of some of the criminals the bill targeted as “super predators.”  After that, while on the campaign trail for his wife, Bill Clinton lost his temper with some #BLM hecklers, defending the anti-crime bill and saying that #BLM didn’t care about black lives when they were taken by black criminals.

The issue that #BLM has with Bill and Hillary in regards to the anti-crime bill is that mandatory sentencing and “three strikes” laws have caused mass incarceration of African-Americans and helped destroy the black community.  Consequently, the Democrats are tripping over themselves to distance themselves from the anti-crime bill.

When Bill Clinton lost his temper, he through out a word at the #BLM protesters that unfortunately was almost a generation away from being meaningful: crack.  Bill Clinton was elected in 1992 and took office in 1993.  This was the zenith of the “crack epidemic” that started the early 1980’s and peaked in 1993.

An enterprising YouTuber put together a compilation video of CBS news reports on the crack epidemic.  It is almost 90 minutes long, and really gives you an insight into the national drug zeitgeist.

Associated with the crack epidemic was a spike in violent crime.  Crime rates had been going up since the late 1960’s, but climbed to new heights between the mid 80’s and mid 90’s. 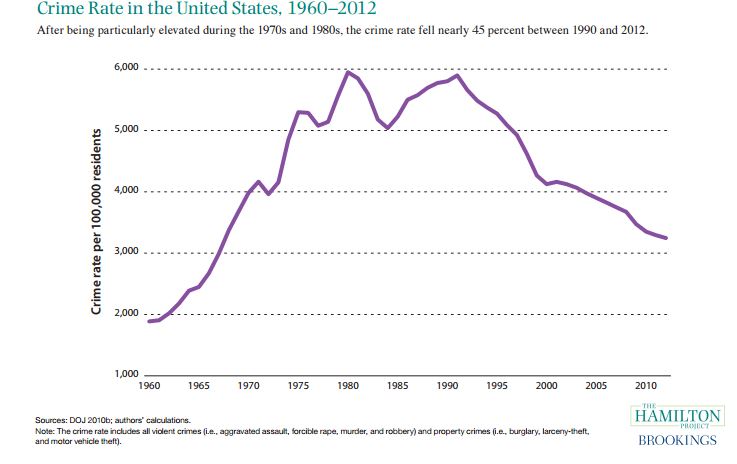 During this peak, the crack epidemic was destroying black communities and led to the evolution of inner city gangs from vandalism and petty crime to powerful, violent, drug dealing organizations which began warring over control of the drug trade in major US cities.  It was due to the hugely disproportionate and deleterious effect of crack on black communities, that black leaders, including the Congressional Black Caucus, pushed for harsher sentences for crack possession and dealing.

Let me reiterate.  The higher sentences imposed for using and selling crack cocaine, a drug that heavily associated with black criminals, was fought for by black leaders to try and save the black community from the ravages of crack.

The problem Bill and Hillary are having is that they are facing a new generation of activists who have no concept of what the crack epidemic or the crime wave of the 90’s was like.  A lot of these SJW types are younger than I am, and I was in the 4th grade when the Clinton crime bill was signed into law.  They only know of this period in history from movies like Boyz n the Hood and Menace II Society.  To them, crack is not a drug that destroyed whole communities, but a throw away punchline – e.g. “I can’t stop eating these french fries, I think they cooked them with crack.”

Mandatory minimum sentencing and three strikes laws were some of many legislative and policy changes that helped turn the tide on America’s crime problem.  They were a reversal of policies put in place in the 1960’s and 1970’s that accelerated the rise in violent crime.

“One major reason was that as crime rose the criminal-justice system caved. Prison commitments fell, as did time served per conviction. For every 1,000 arrests for serious crimes in 1970, 170 defendants went to prison, compared with 261 defendants five years earlier. Murderers released in 1960 had served a median 4.3 years, which wasn’t long to begin with. By 1970 that figure had dropped to 3.5 years.”

But as the often misattributed but highly accurate quote goes: “If you repeat a lie often enough, people will believe it.”  Well the myth of mass incarceration is one of those often repeated lies.

What is troubling is how new policy is being created that directly undoes the progress made in the 1990’s.  Well intentioned but ignorant people have been trying to fight the “school to prison pipeline.”

“The ‘school-to-prison pipeline’ refers to the policies and practices that push our nation’s schoolchildren, especially our most at-risk children, out of classrooms and into the juvenile and criminal justice systems.  This pipeline reflects the prioritization of incarceration over education.“

However, as schools adopt policies that limit expulsion and higher levels of student discipline schools have become more violent, with teachers coming under physical attack.  What goes unsaid is how this policy affect the kids in these classrooms who do behave and have their educational opportunities cut short by the bad students.

In several major US cities, reductions in policing and arrests due to social activism have lead to crime waves known as the Ferguson Effect.  To the point where a handful of these cities are responsible for the majority of all the murders in the US.

At the local level we have seen what reduced sentencing and inadequate policing has done to communities at an alarming rate.  When Rudy Giuliani became mayor of New York City, he cracked on quality of life crimes – e.g. squeegee men, turnstile jumping, peeing in the street –  in a policy known as broken windows policing.  This was credited as helping reduce the violent crime and other maladies that was plaguing the city in the 80’s and 90’s.  Mayor de Blasio, following the progressive dogma that being tough on crime is bad has stopped prosecuting quality of life crimes.  For the first time since I was a baby, homeless men can piss in the middle of a busy NYC street and get away with it.  As you can imagine, older New Yorkers, those who remember the bad old pre-Giuliani days, are concerned that these policies will lead to NYC having a pre-Giuliani murder rate as well.

America is watching in horrifyingly real time how progressive politicians, trying to make nice with the #BlackLivesMatter and Social Justice movement by denouncing and undoing the tough-on-crime polices put in place in the mid 90’s through early 2000’s, is resulting in a huge increase in violent crime and murder.  The more the progressive media personalities and activists justify looting and arson because a racial grievances, the more real damage they allow to happen to minority communities with violent crime.

Their hearts are bleeding.  So are the bodies of almost 1,300 people in Chicago.

Now compare all of that with the other major act of the 1994 crime bill, the Public Safety and Recreational Firearms Use Protection Act or Assault Weapon Ban (ABW).  Notice in the first video posted, how many people in the audience applauded the ABW and the “ammunition clip limit.”  As fast as Hillary is to denounce the 1994 crime bill as a mistake promises to amend federal law to be more lenient on criminals, she is in favor of bringing back the ABW.

In contrast to the other parts of the crime bill, just how effective was the AWB in reducing crime?  Not. At.  All.  And with the surge in purchases of these types of rifles since 2008, reinstating the ban will do nothing to prevent more crime.

Even those to try to tie the end of the AWB to mass shootings can only come up a conclusion that is “tenuous” at best.

And what about the effectiveness of the Clinton’s beloved Brady Bill?  Equally.  Worthless.

But there has to be more gun control and the victims of gun violence need to be able to sue the gun makers because… progressive reasons!!!

The politicians, activists, and pundits on the left are simultaneously pushing against effective anti-crime legislation and for ineffective anti-gun legislation.  Ignoring the ABW’s violation of civil rights, what they left wants is to do less of what worked and more of what didn’t.

These progressives will bring about more crime, more violence, and more death,  in pursuit of Social Justice.  They lack the historical understanding of what led to the crime peak of the 80’s and 90’s and what helped to end it.  They don’t understand how minority leaders fought for safer streets in minority communities and how it will also be minrity communities that are the first to be destroyed by their new policies.

The greatest tragedy in all of this is that the old guard of the Left (as much as I disagree with them on many, many issues) should be using this as a teachable moment but it is failing.  Bill tried but got shouted down and is on the path to surrendering to the #BLM/SJW movement.

More lives will be scarified on the alter of leftist, collectivist ideology because of this.

One thought on “A little bit of history”