The saying is “two is one, one is none.” The idea being that if you only have one of something and it breaks you are no shit out of luck.

If you have two of something and one breaks you still have the other and can keep on going. More importantly, you now have a parts thing to be able to repair your second thing.

It also turns out that I like having rifles in pistol calibers with a pistol to match. Which is why I have a Ruger PC-9.

I like both, they are fun to shoot. The only issue I’ve ever had with them was rounds that had bad primer seating. This lead to failure to fire in .45 Colt and .45ACP. My first squib. And it was good to see that I caught it and knew what it was.

Then my daughter fell in love with a Springfield Trapdoor in 45-70. This lead to a Henry lever action in 45-70. Now that thing hits HARD.

While all of this was going on I found a want to shoot without losing brass. Brass is getting hard to get and my standard range has range officers that are on broom patrol. If they see brass on the ground they sweep it out into the lanes where it can’t be recovered by the shooter. On a good day I recover maybe 75% of my brass but on some days I consider myself lucky to recover 40%.

A revolver would allow me to retain all my brass. I decided to go with .357/.38SPL because I had .357 brass and the only other rimmed pistol caliber I had was .45 Colt.

I don’t know about the rest of you, but it is darn hard to drive past my LGS when I only get out that way once a month or so. I had gone to get my daughter’s car worked on and on the way back I stopped to take a look. Boy was I in luck.

They had a Rossi R92 from the 1990’s (I think) and the wood was beautiful. The finish was ok with only a little bit of wear. It had a U notch rear sight. It shouldered well and was just beautiful. It followed me home.

I got it home and took it out to the test range. The test range isn’t all that long but it allows me to test functionality of a firearm. Does it go bang when you press the trigger and does the steel ring?

Here I found “the” problem with the R92. When loading the last cartridge loaded doesn’t center in the receiver. Since it doesn’t center the lifter doesn’t popup and so you can’t chamber that round. You can reach down into the receiver and move the cartridge to the left and it will center correctly and then everything will function as designed. 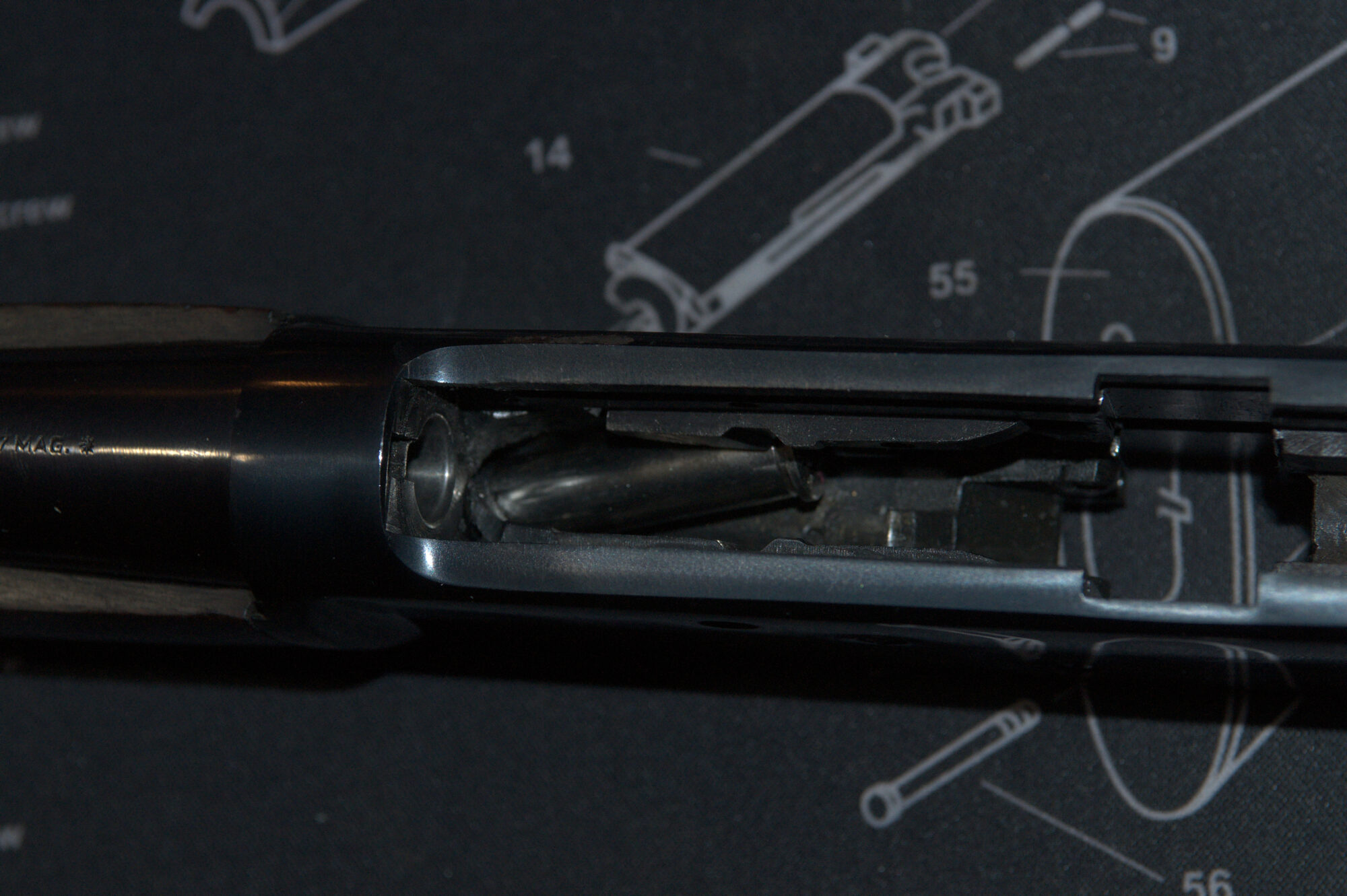 When everything is working correctly, this is how it is suppose to look. 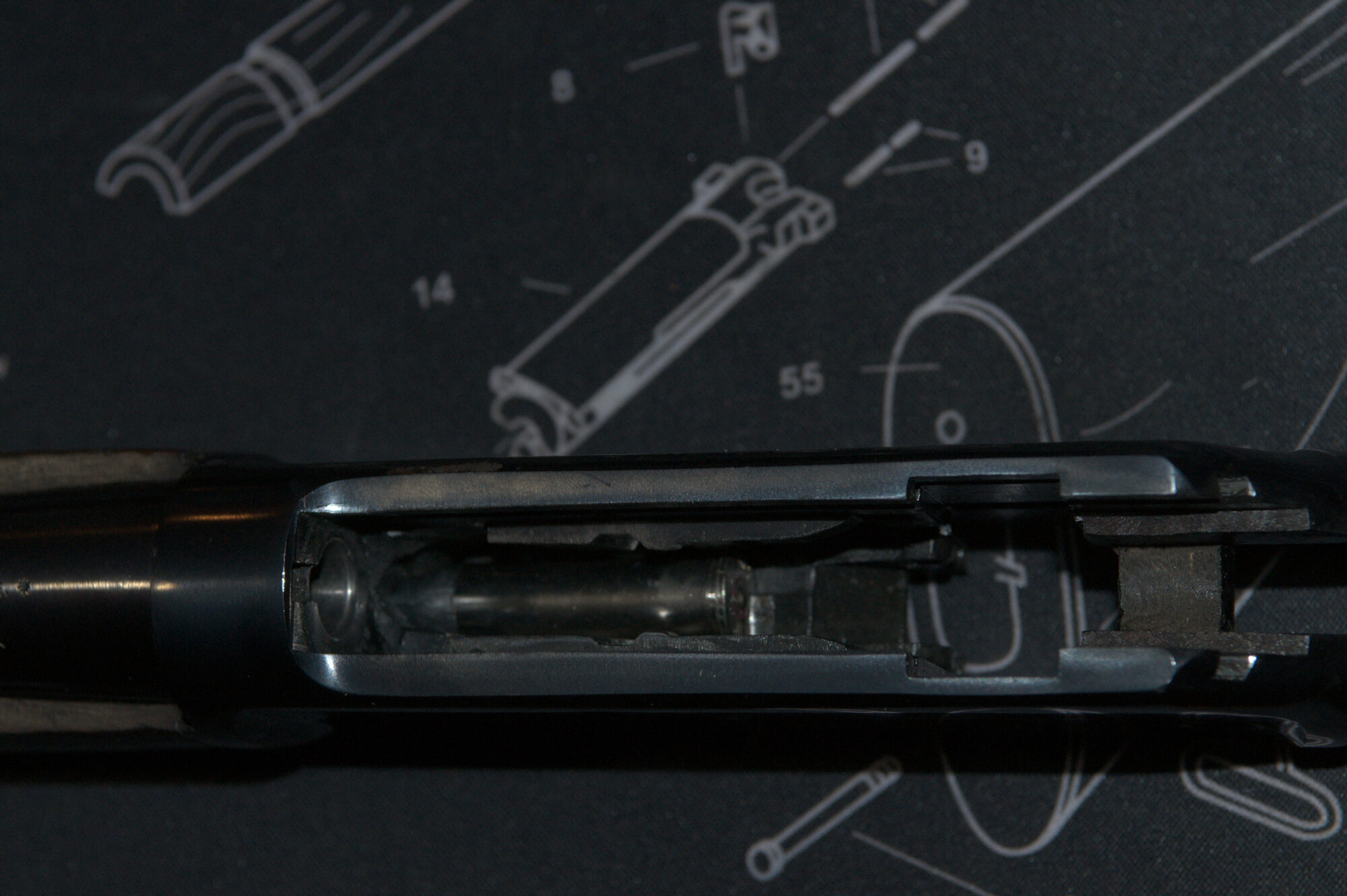 And for you all that are worried about safety, this is a dummy round. The primer is expended and there are a couple of BB’s in the case that rattle when you shake it. So visual and audible markings to let me know it is a dummy round. 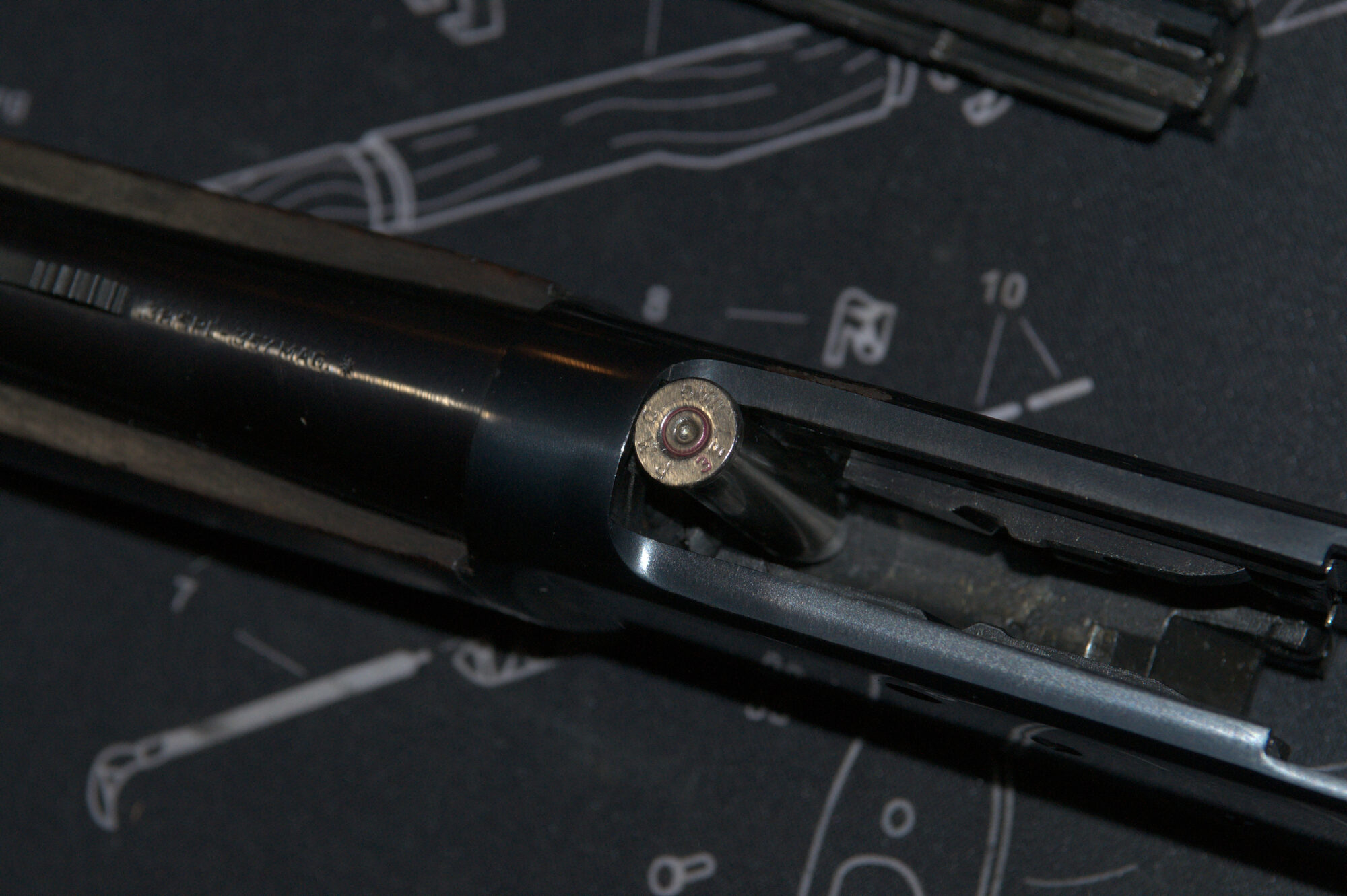 Rossi firearms have a reputation for not being the best in terms of fit/finish/QA. This means that almost any part of the firearm that isn’t user visible is likely to be unfinished or not well finished. If you go online you will find many many stories of R92’s that have the cartridge hangup when you load the last round.

The standard issue is that the leading edge of the loading gate is “razor sharp”. The fix is to make it a bit flatter and make sure the case head doesn’t hang up there. So I took it apart. 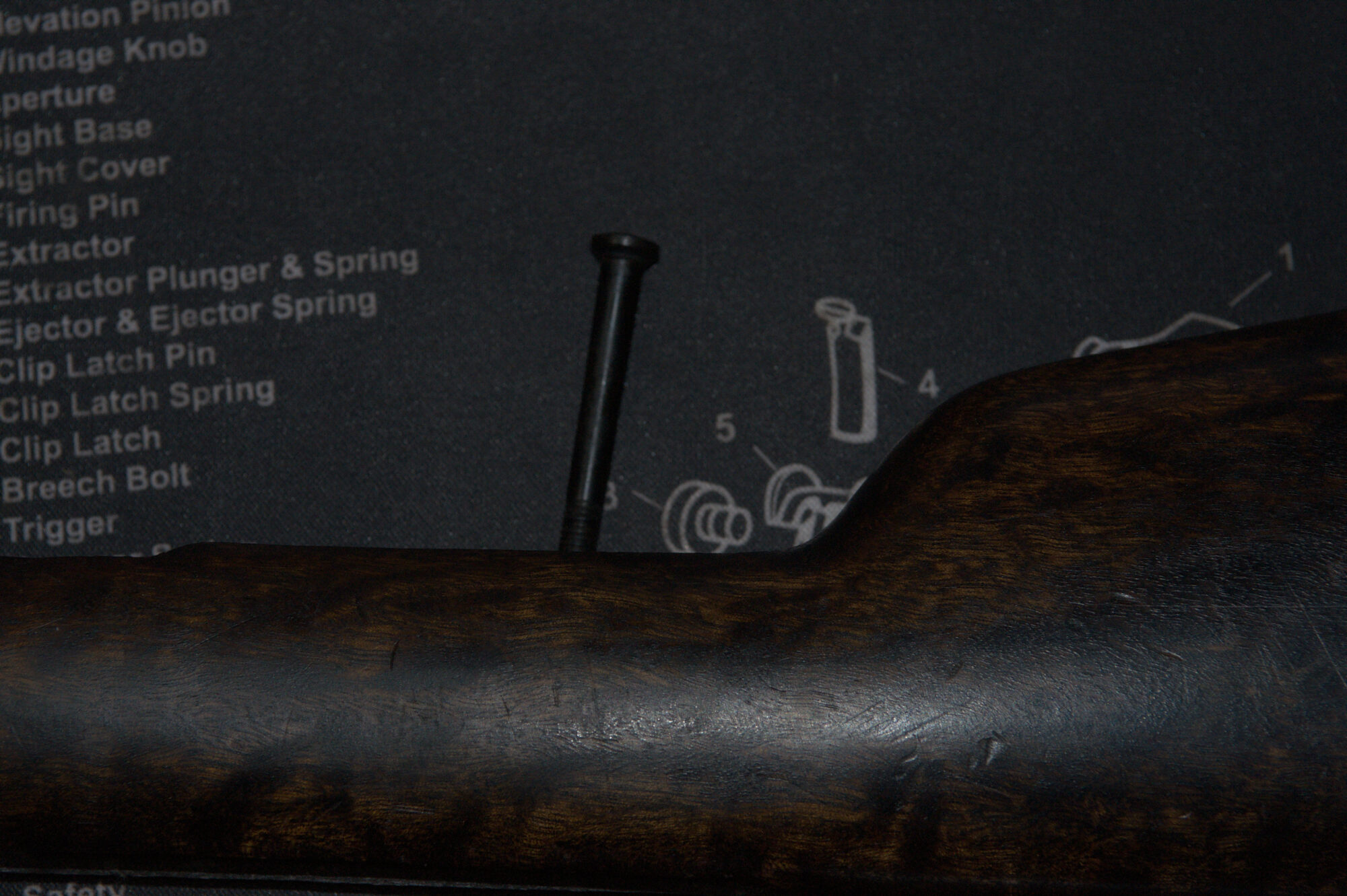 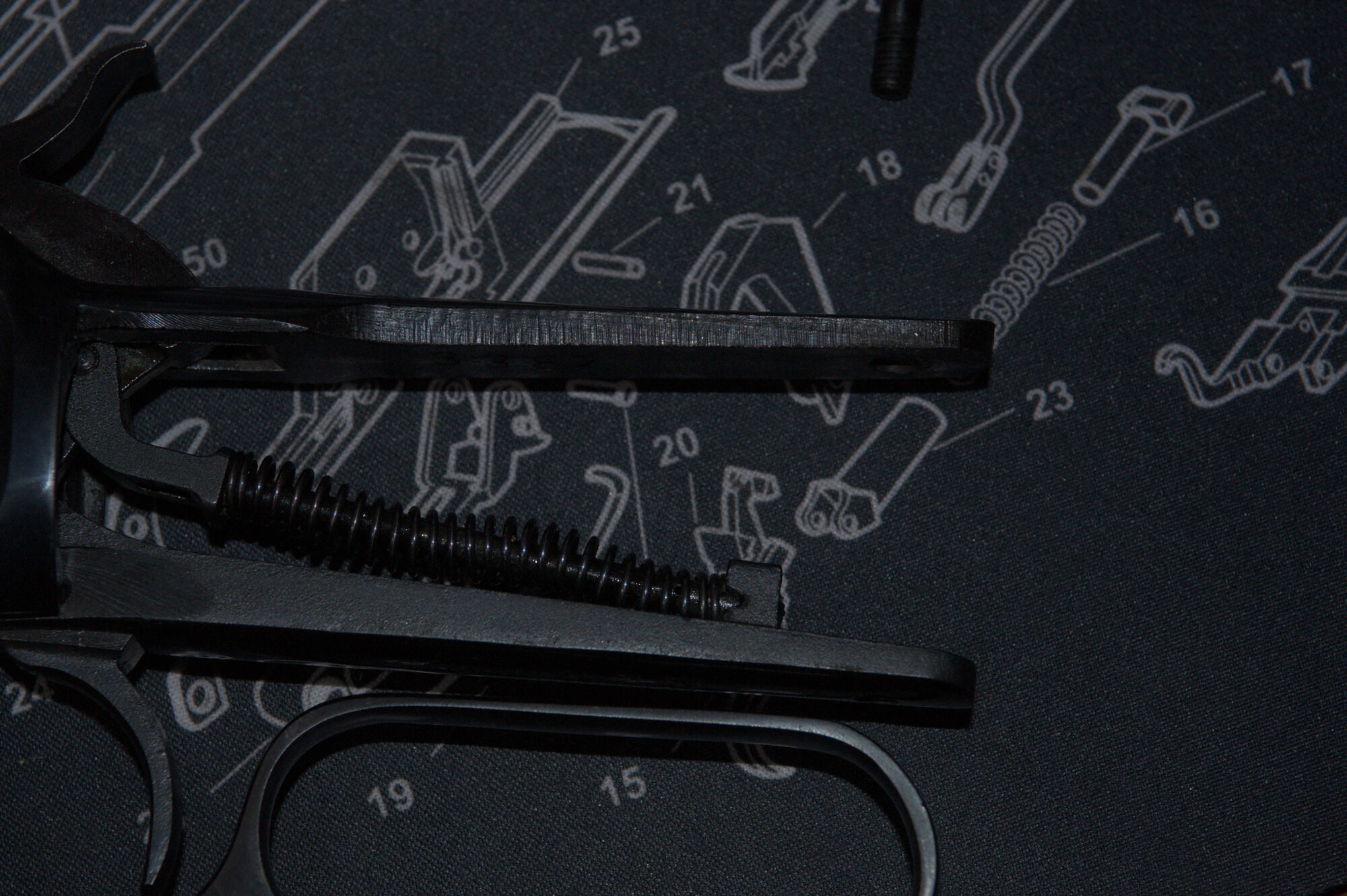 Had to look this next part up. You need to use a thin wire to capture the main spring. I just use a paperclip. That paperclip now lives in the tool kit.

Once the main spring is captured you can remove the bolt/finger link pivot, the hammer pin/screw and remove the lower tang and hammer assembly. 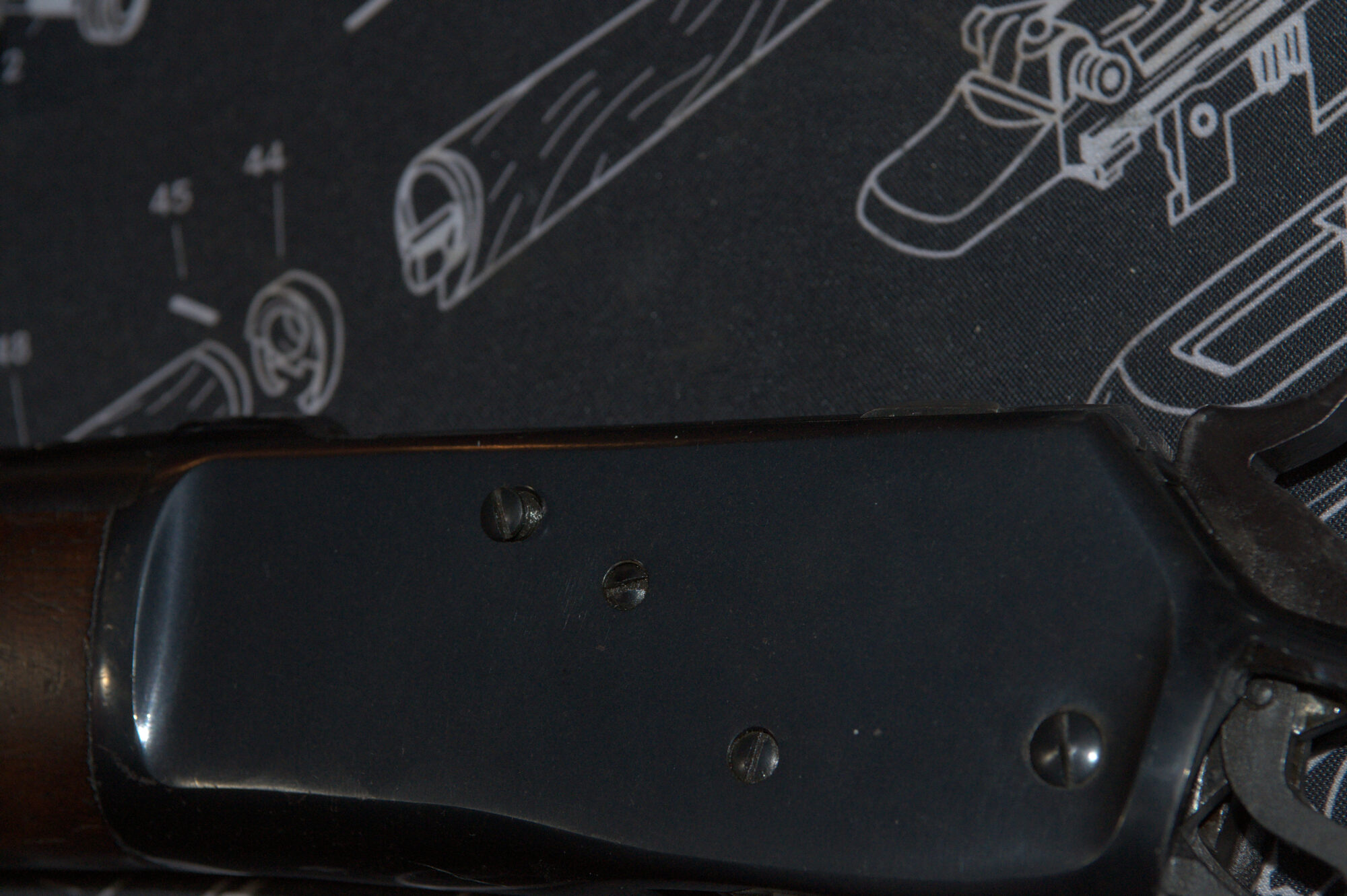 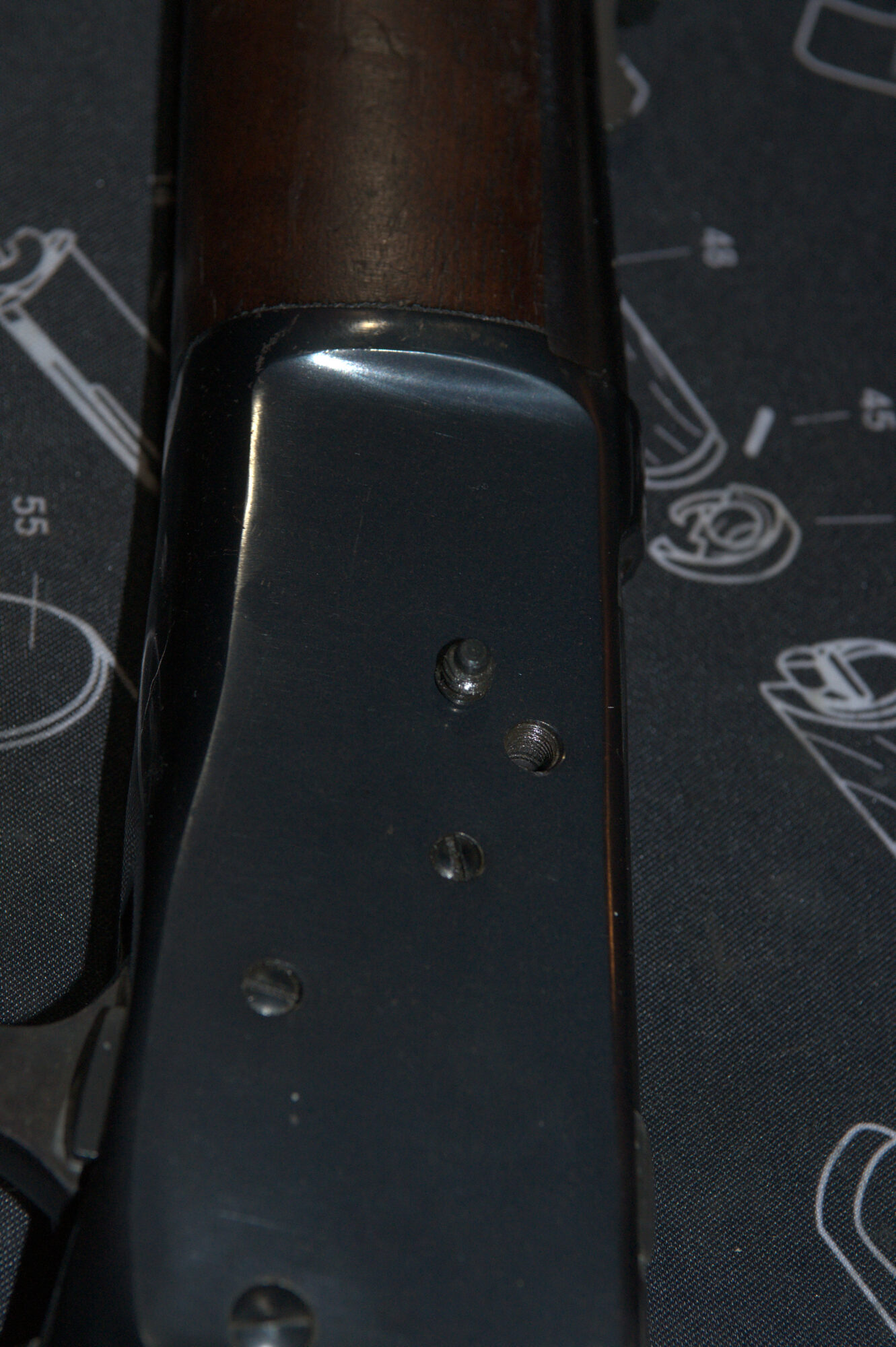 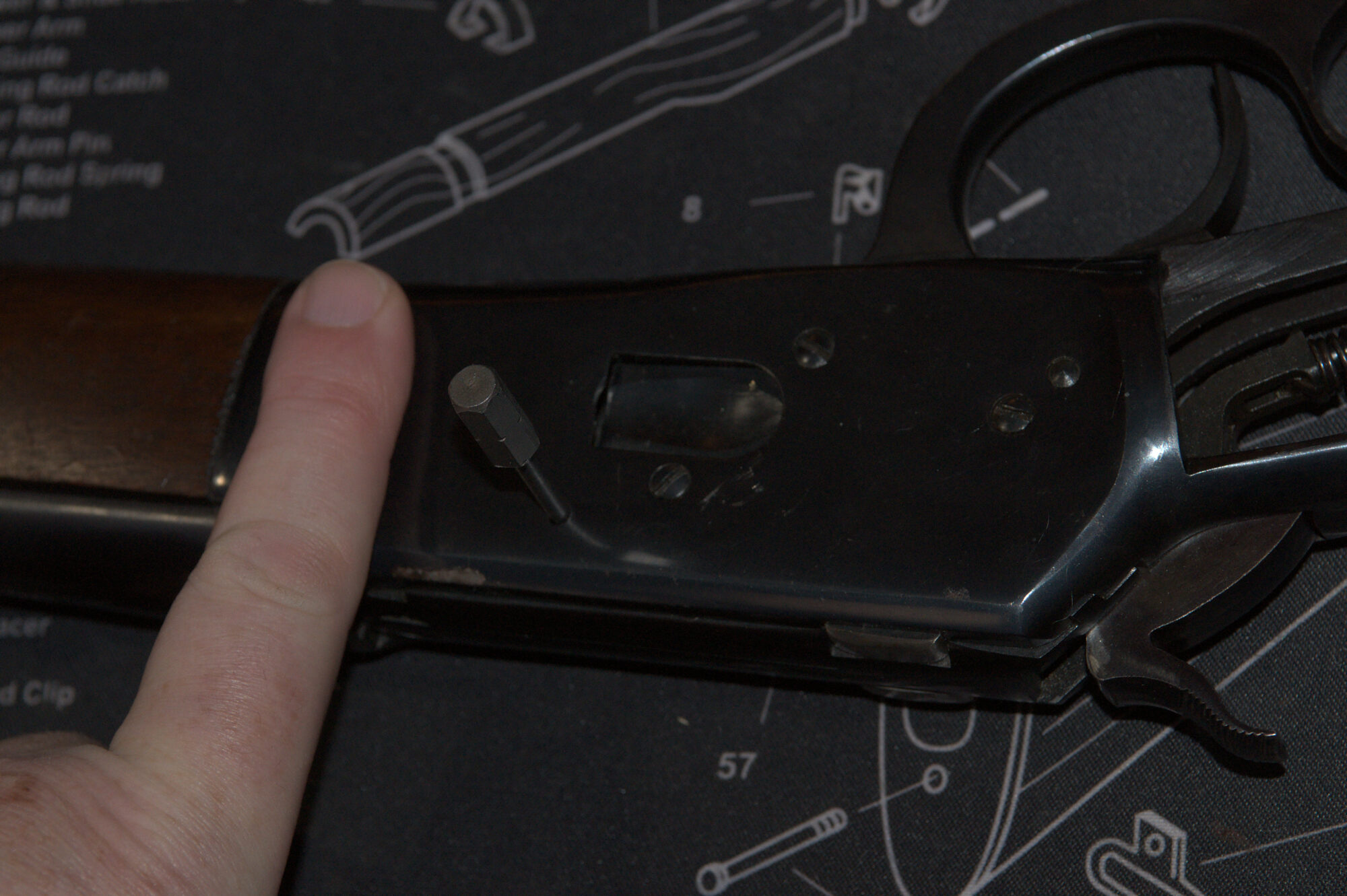 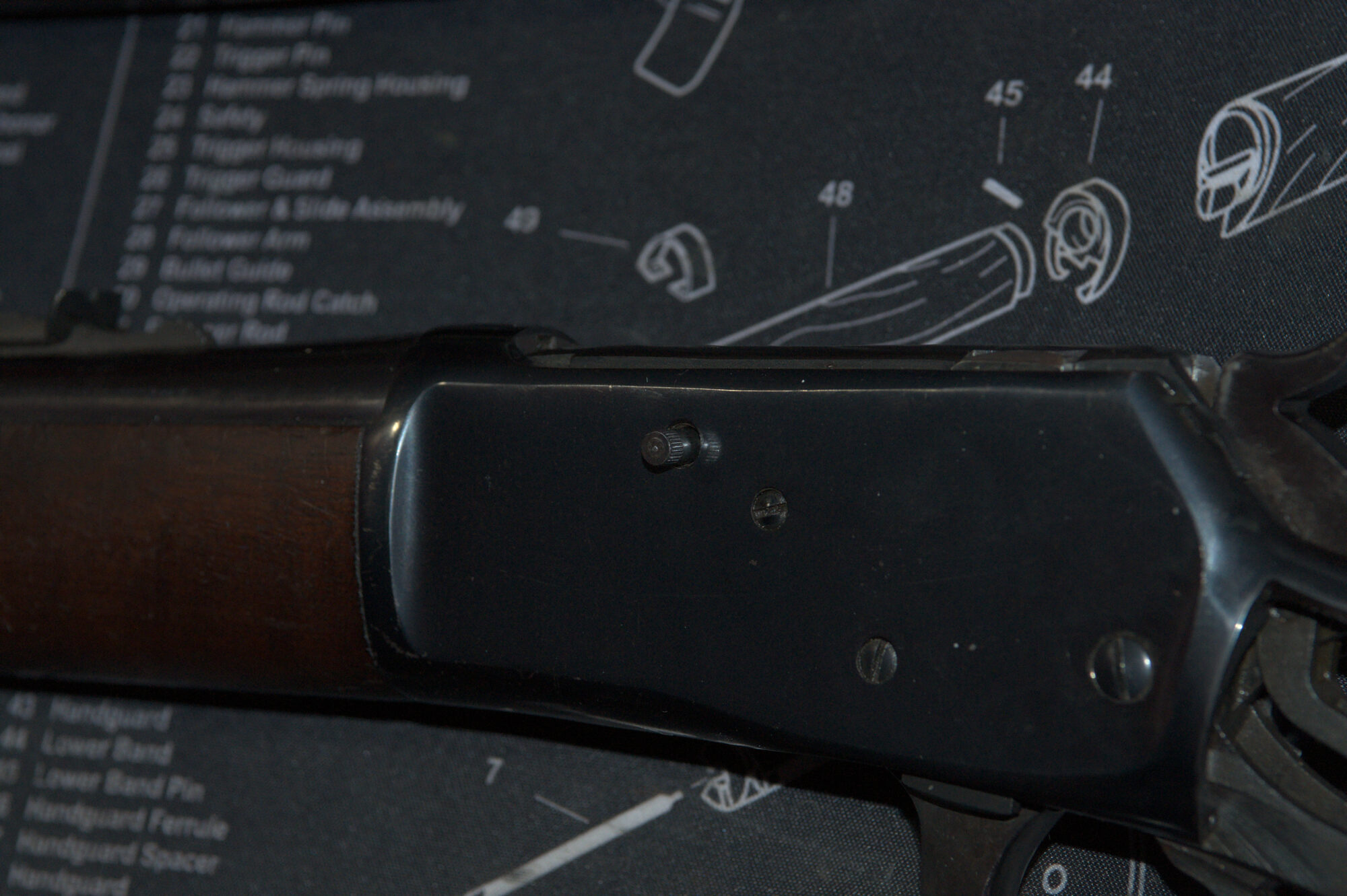 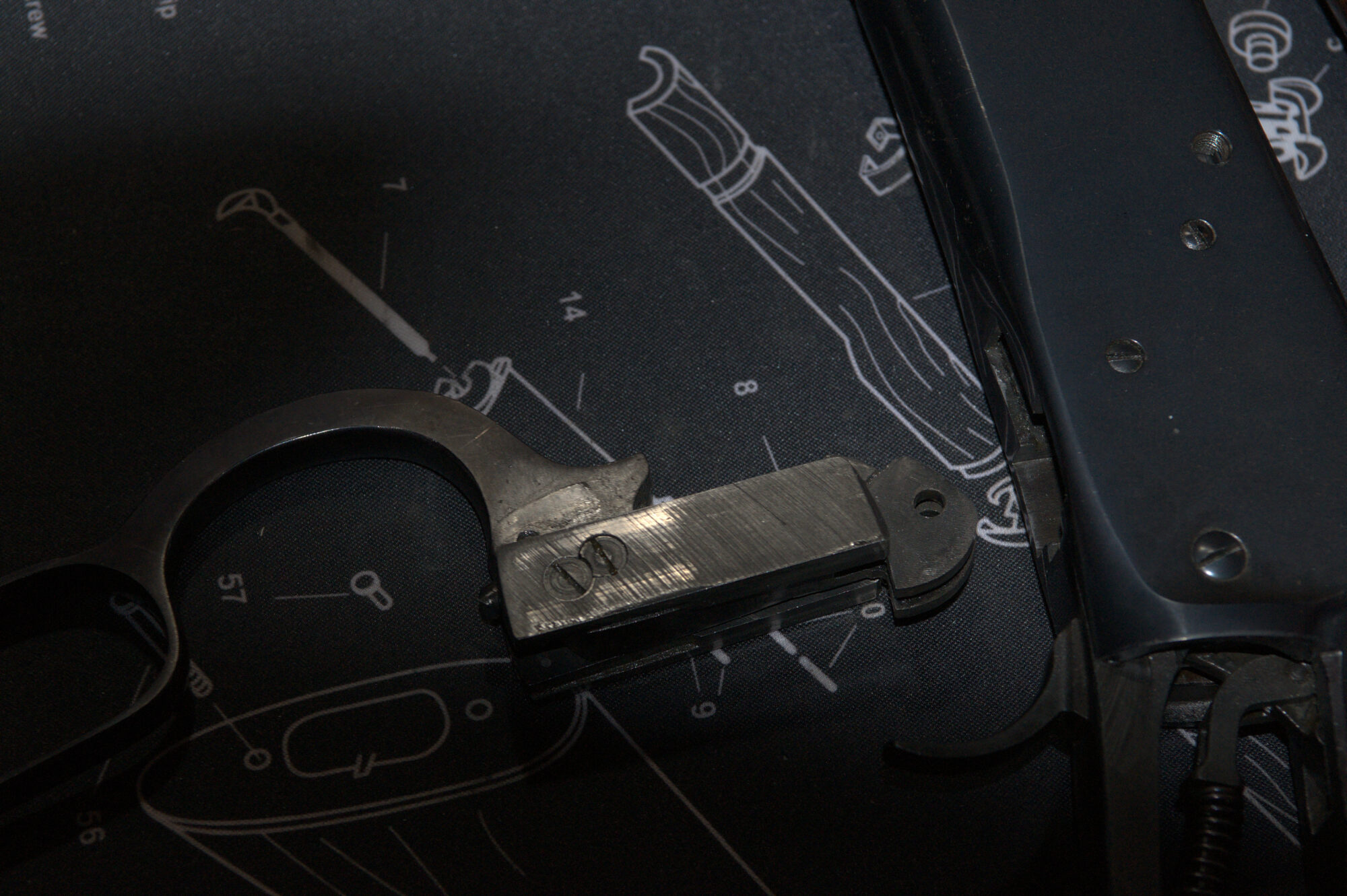 John Brown loves his locking bars. These bars have a screw/pivot pin on one and a hole on the other. If you pull the finger lever out with the loading gate down you will have the lower locking bar fall off. If you are like me, that bar will then bounce off the nice mat and land on the floor, covered in gun oil it will collect anything that hasn’t been swept up.

There is a rabbet on the locking bars, this picture shows how they should line up. 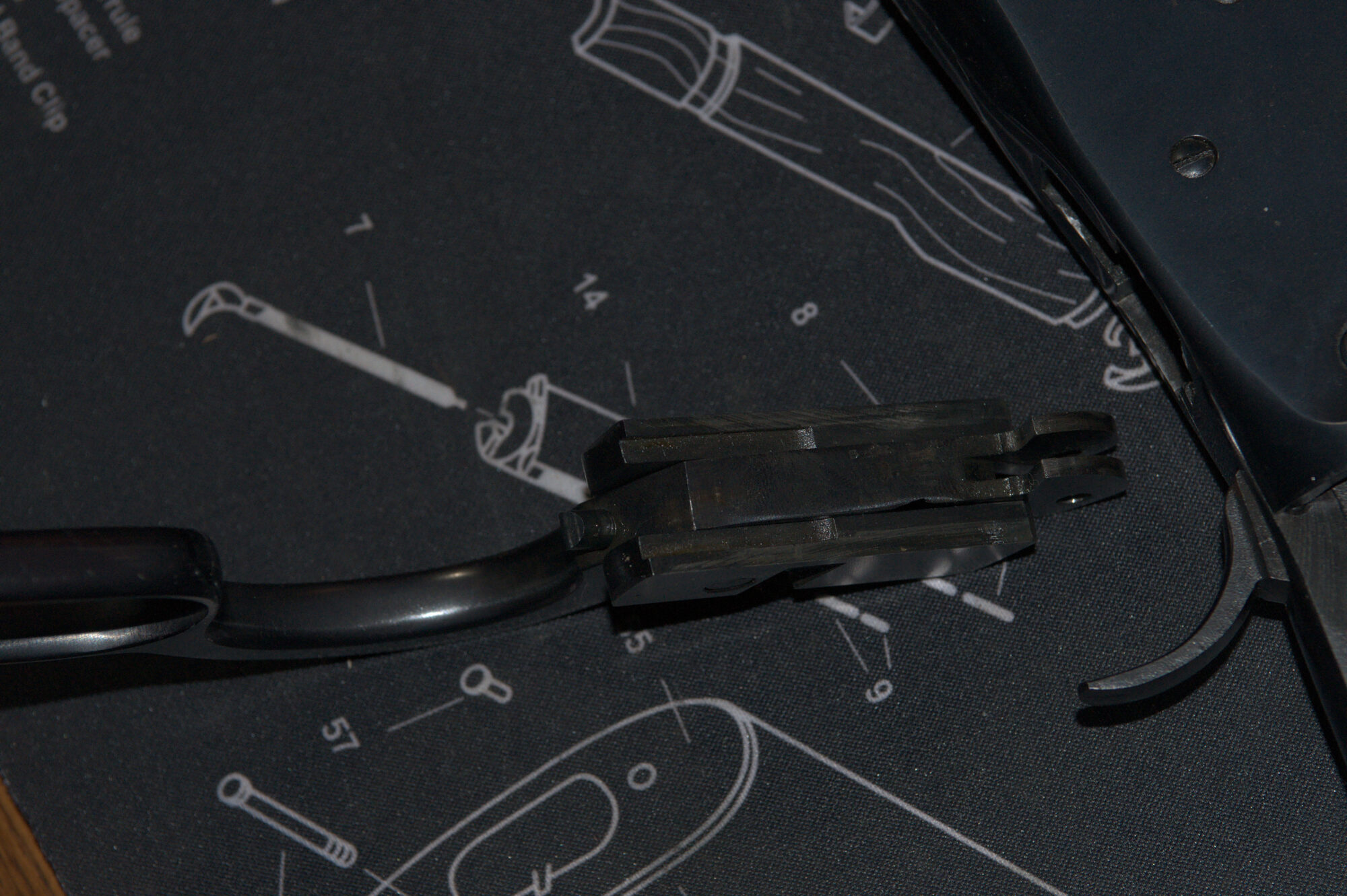 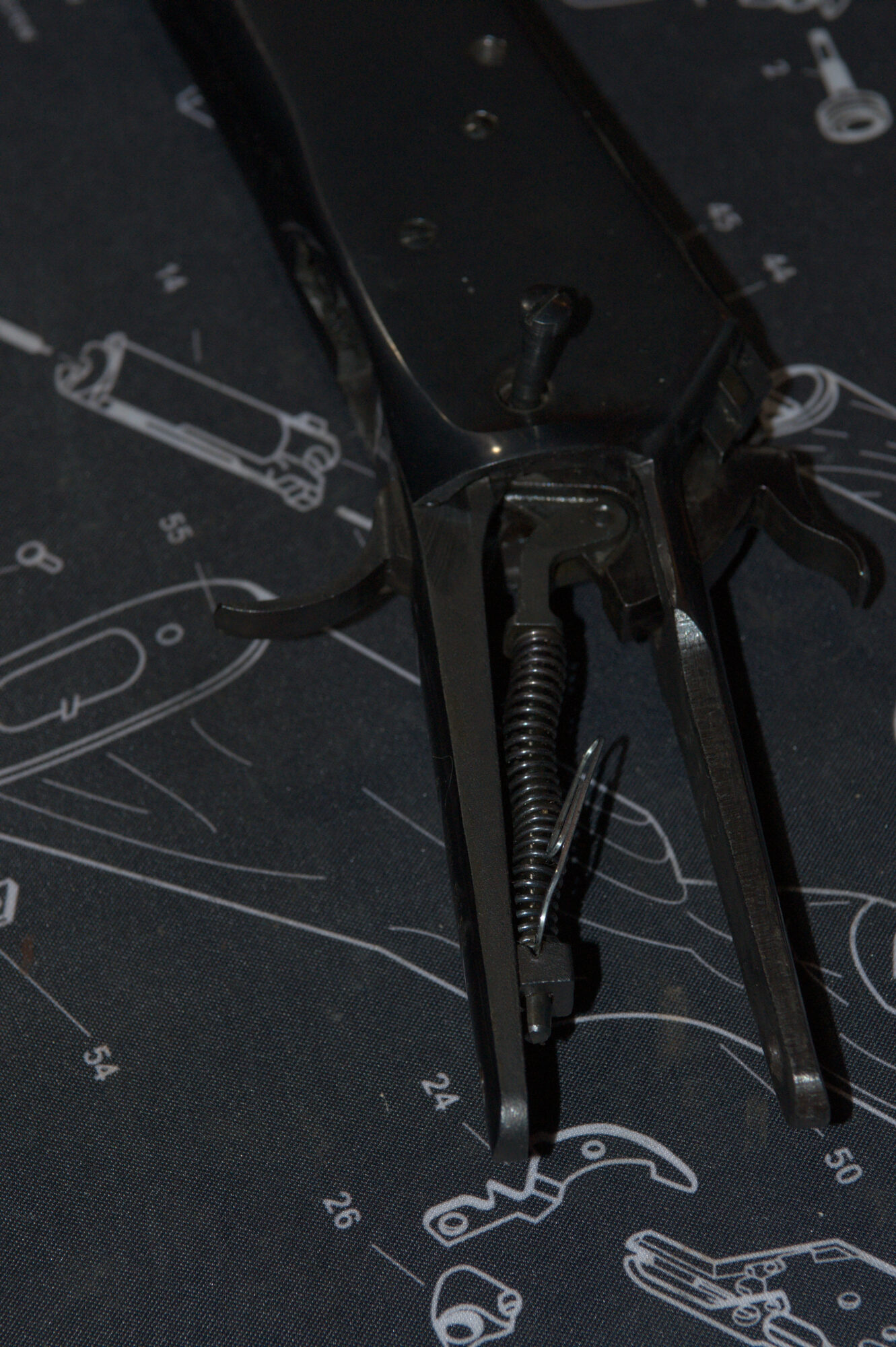 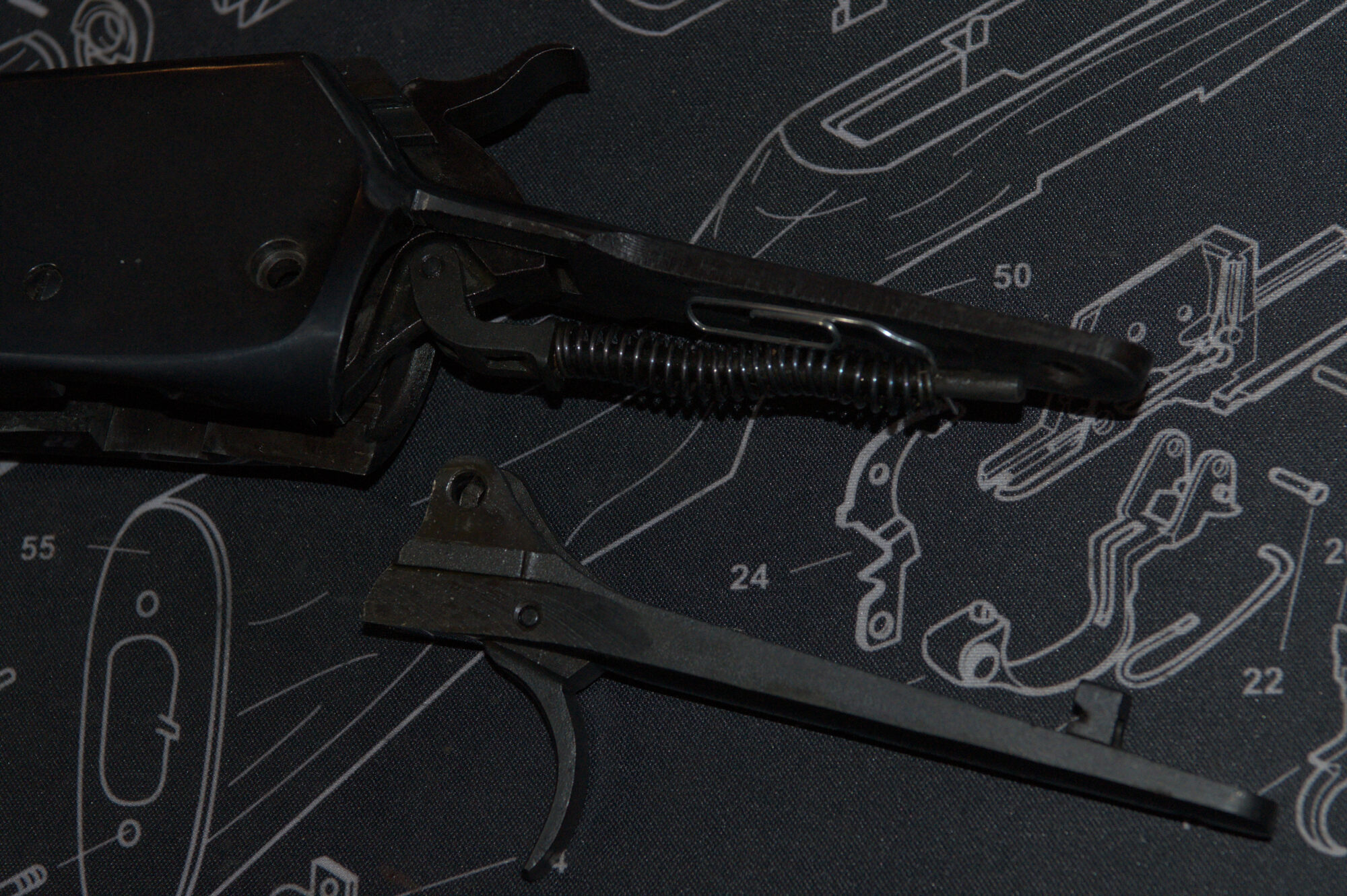 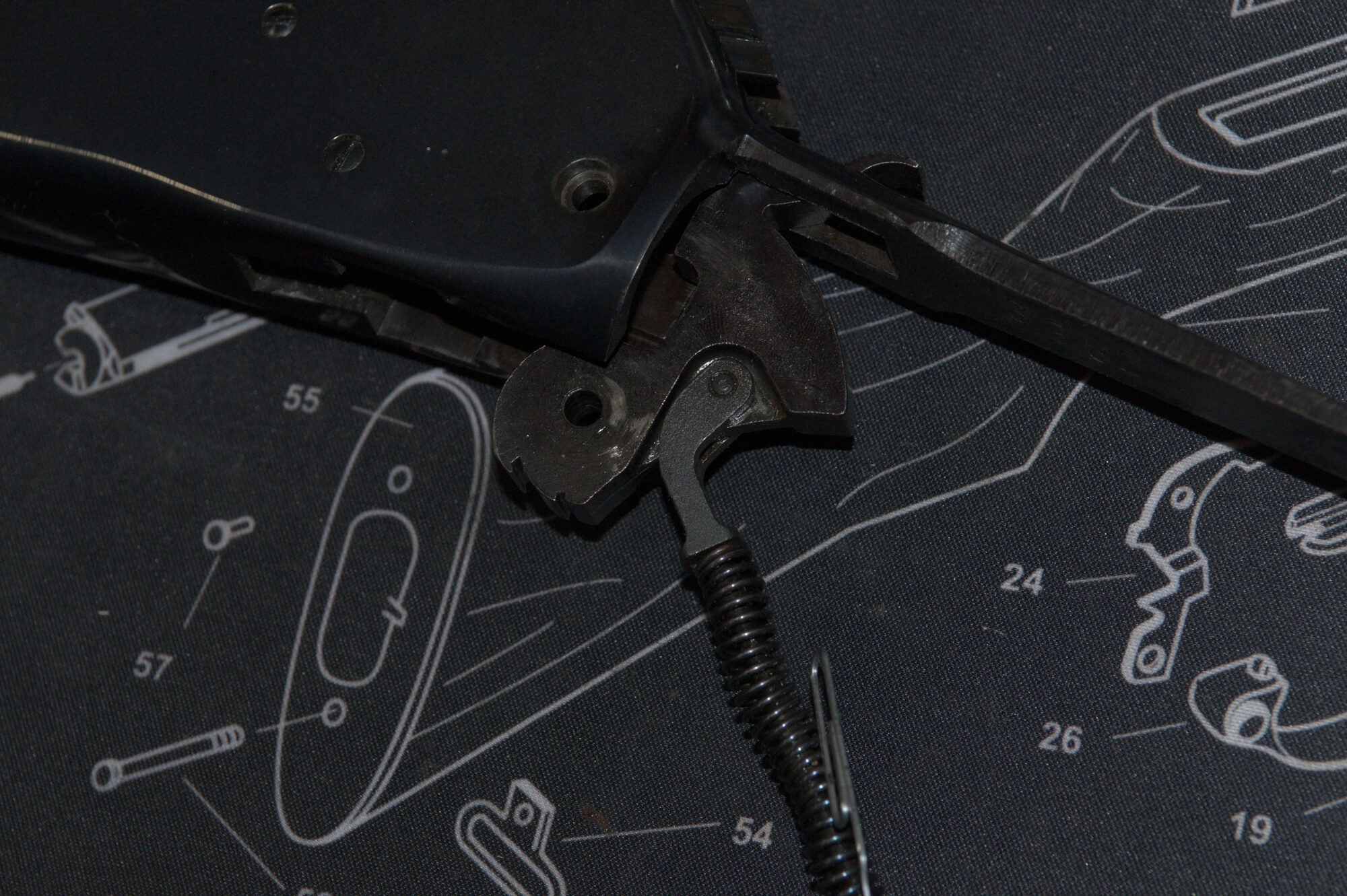 When reassembling it is important to watch the trigger pin. It will sometimes slide downward and if it does the lower tang will not go into the receiver.

Now that the hammer is out of the way you can remove the bolt. The ejector is a real pain in the butt. It has a very heavy spring. It consists of three parts, the ejector itself, the ejector spring, and a small collar. The collar is caught on a finger in the bolt and the spring pushes against that. If you lose the collar your rifle is not going to be able to eject rounds. 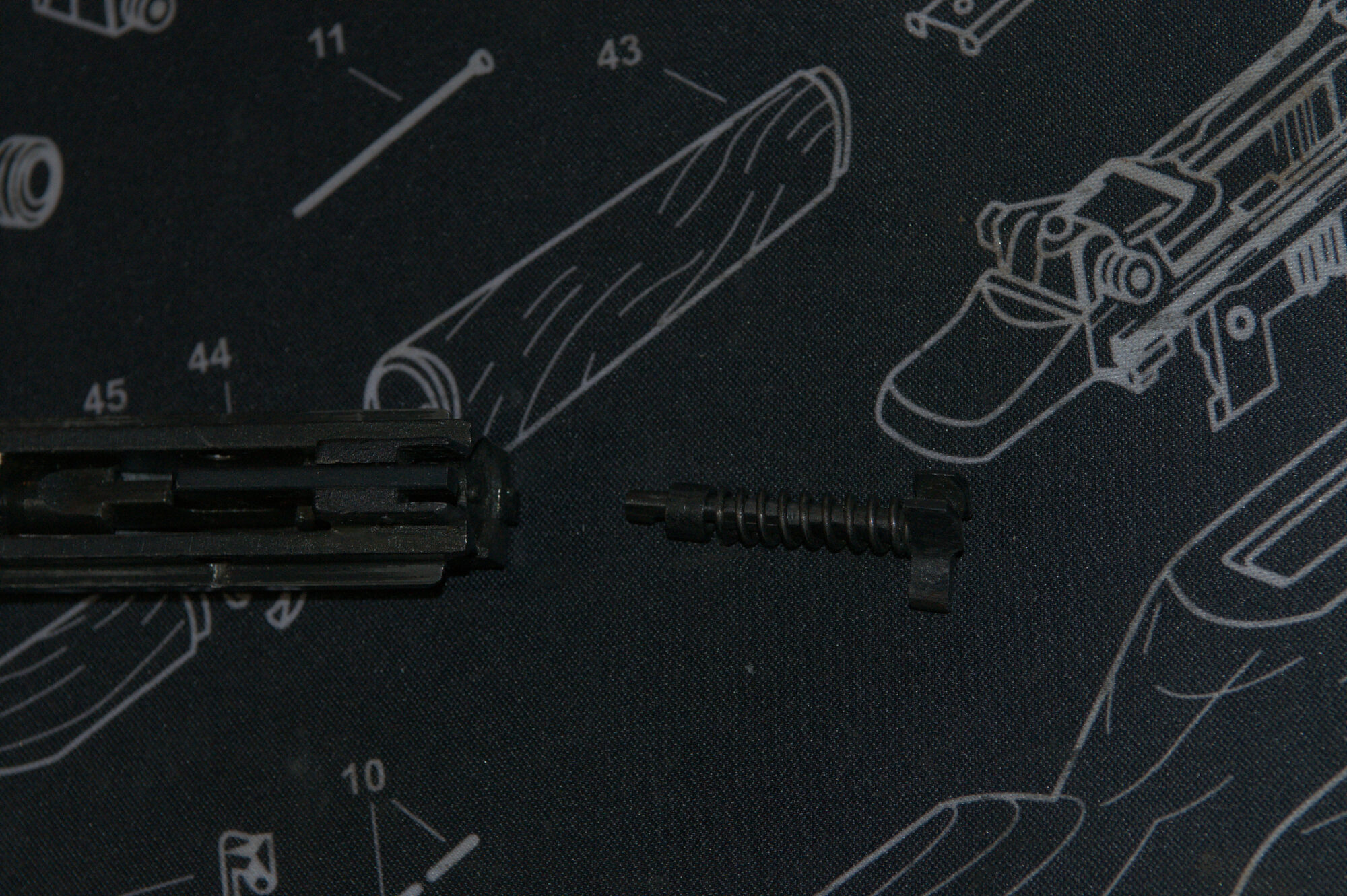 The loading gate can now be removed by removing one screw. 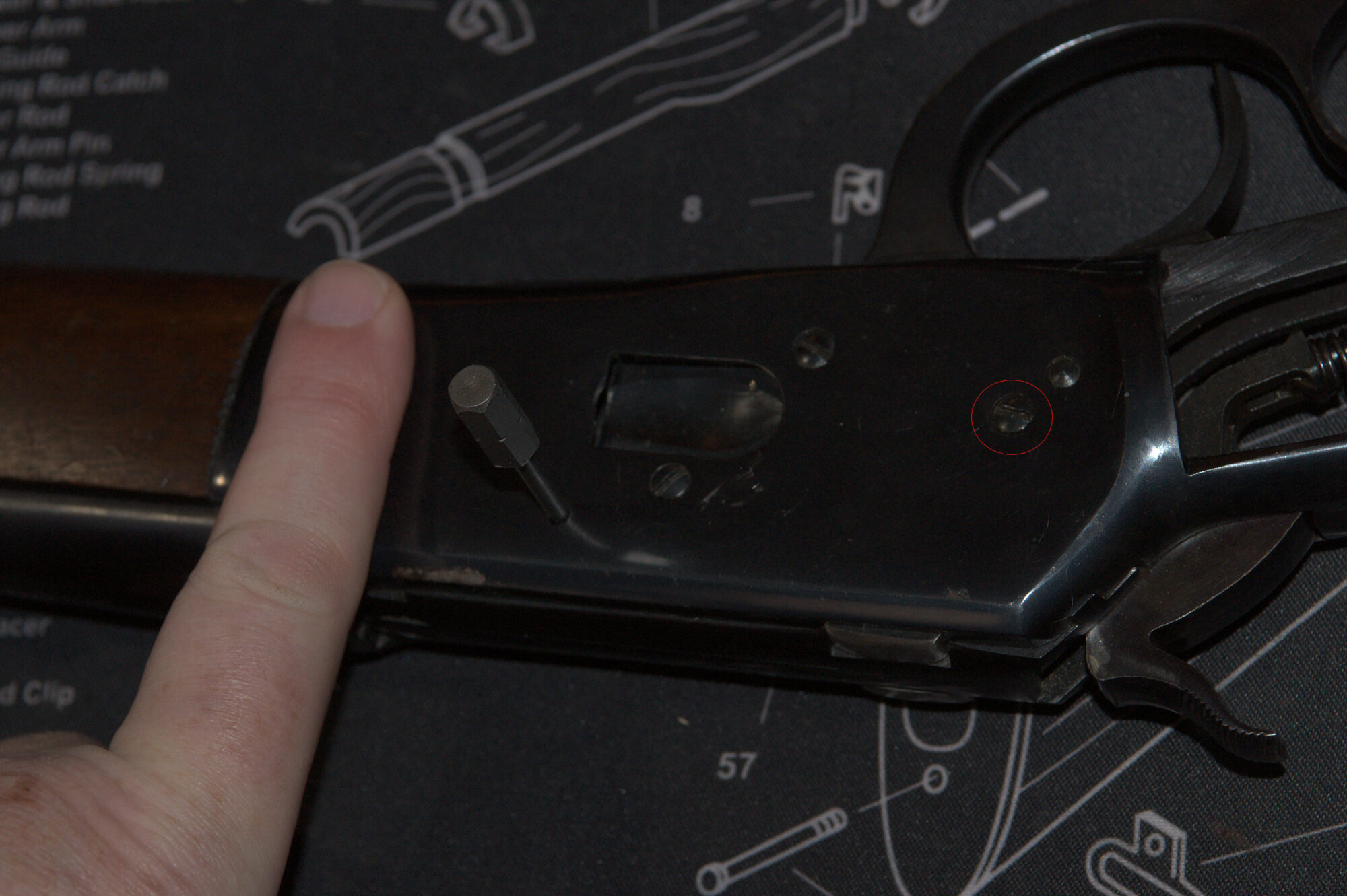 Of course, having gotten this far I didn’t actually take the gate off. Regardless, the inside is all rough cast. For people that don’t understand, think of the outside surface of a new cast iron pan. It is very rough. Not quite at sandpaper levels but close.

On the inside of the gate is a ramp leading away from the leading edge. At the end of that ramp is a flat surface. ALL of those surfaces have to be polished so that the rim of the case doesn’t hang up on them.

Once I had done that cartridges no longer hung up on the loading gate. At least not as often. I’m going to have to go back in and readjust the geometry a little and some other stuff. Regardless, it is much better now and I’m looking forward to a little bit of dry so I can go run a dozen rounds through it to verify functionality. (And loads)

Putting the rifle back together is a pain in the ass. You need to be able to completely seat the bolt in order to get the pivot hole in the right place. The ejector spring is so hard it is almost impossible to push the bolt in that far by hand.

The answer is to use a dummy round OR an empty .357 case. A .38 SPL case is not long enough. You hook the rim under the extractor hook, lever it down against the ejector and its spring, slide the entire bolt into place until the mouth of the cartridge is chambered. Now you can fiddle the finger lever and the locking bars back into place.

Once it is close, carefully align the hole in the bolt with the hole in the finger lever and push the pivot pin back home. The surrations on the pivot pin go towards the removal hole. The first part of the insertion should be finger pressure. You should be able to get the pin flush with the side of the receiver with just finger pressure. If the pin is not going in, it means that the holes are not aligned. Play with the finger lever until the holes align. 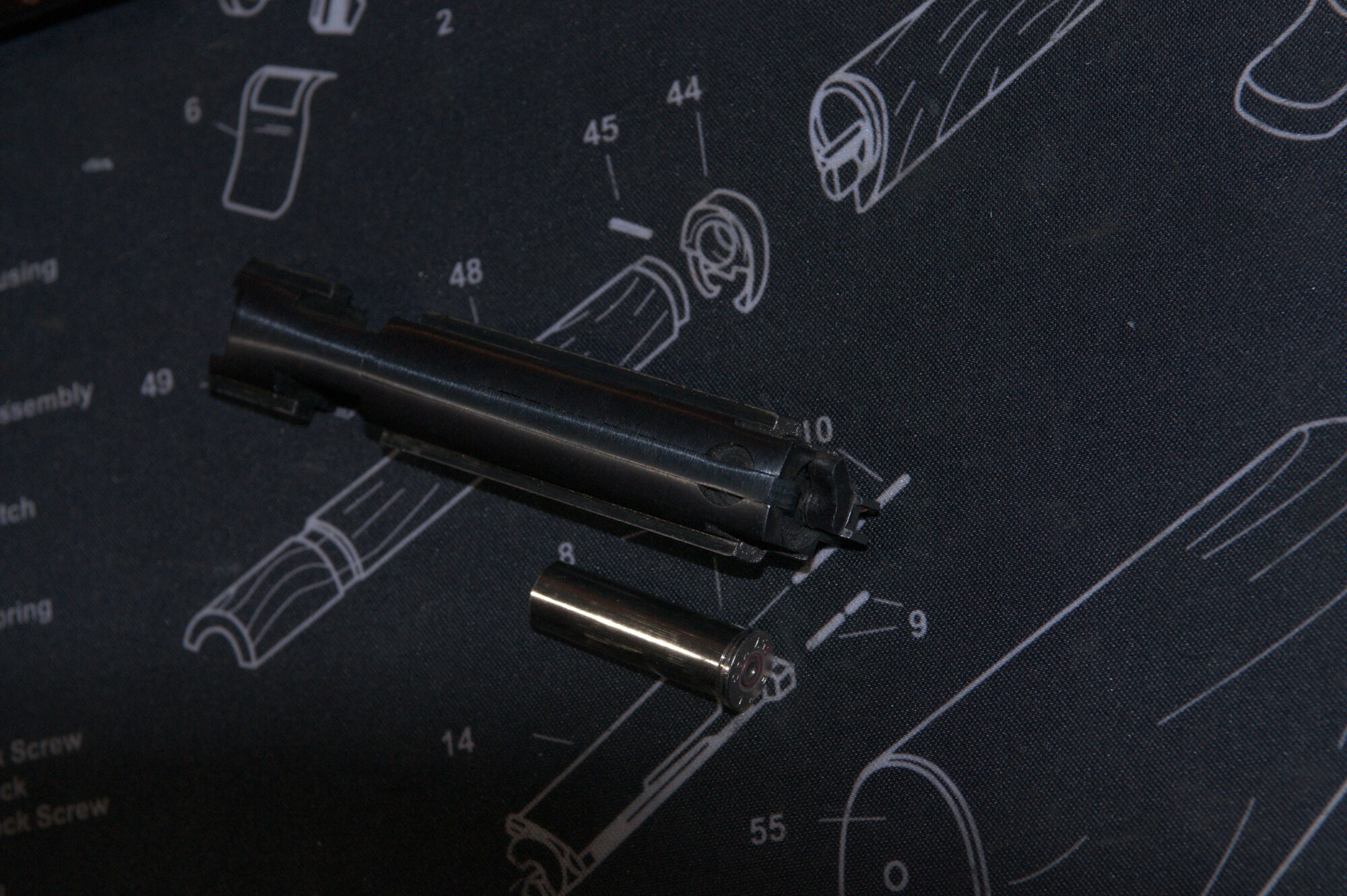 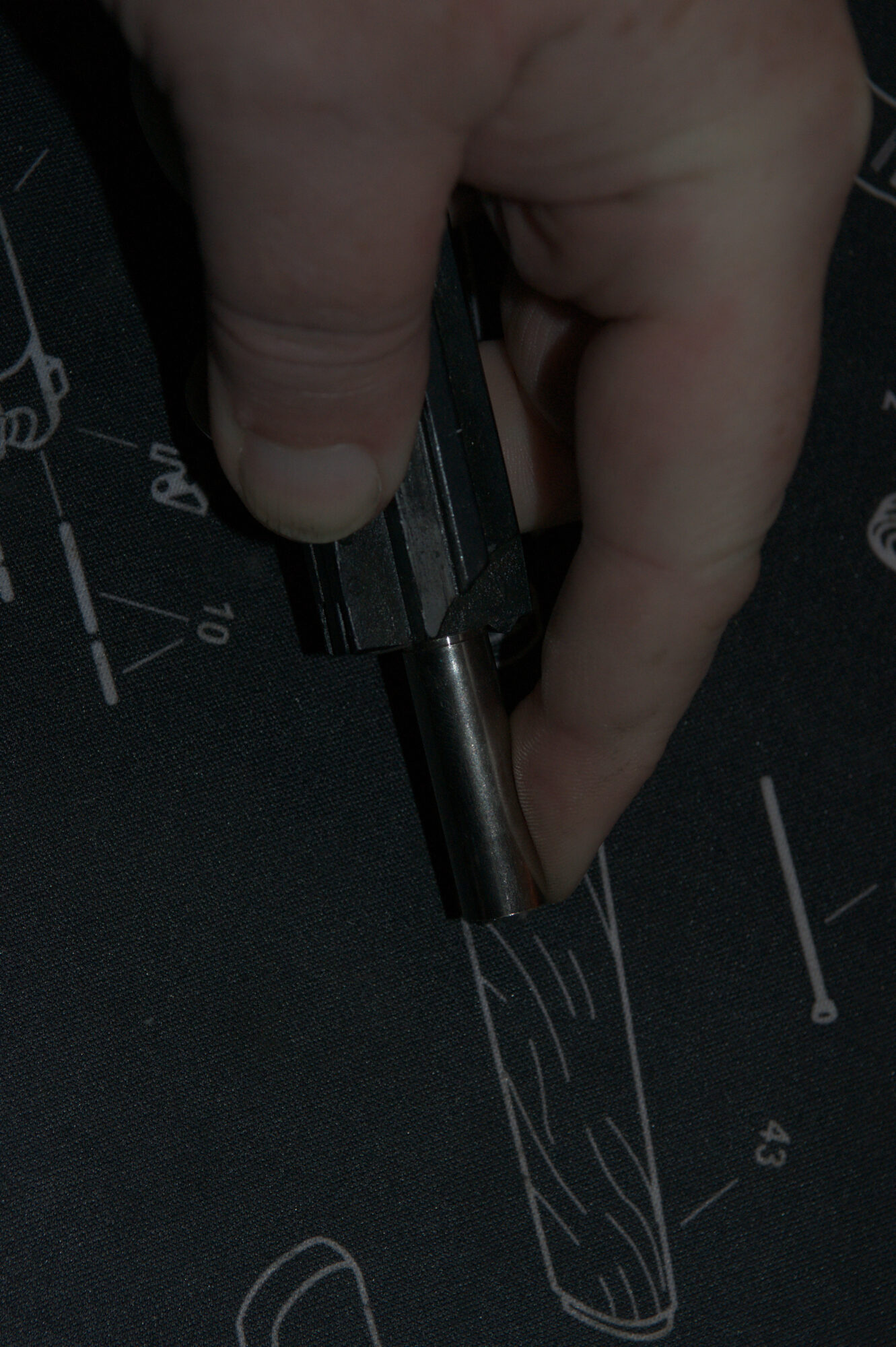 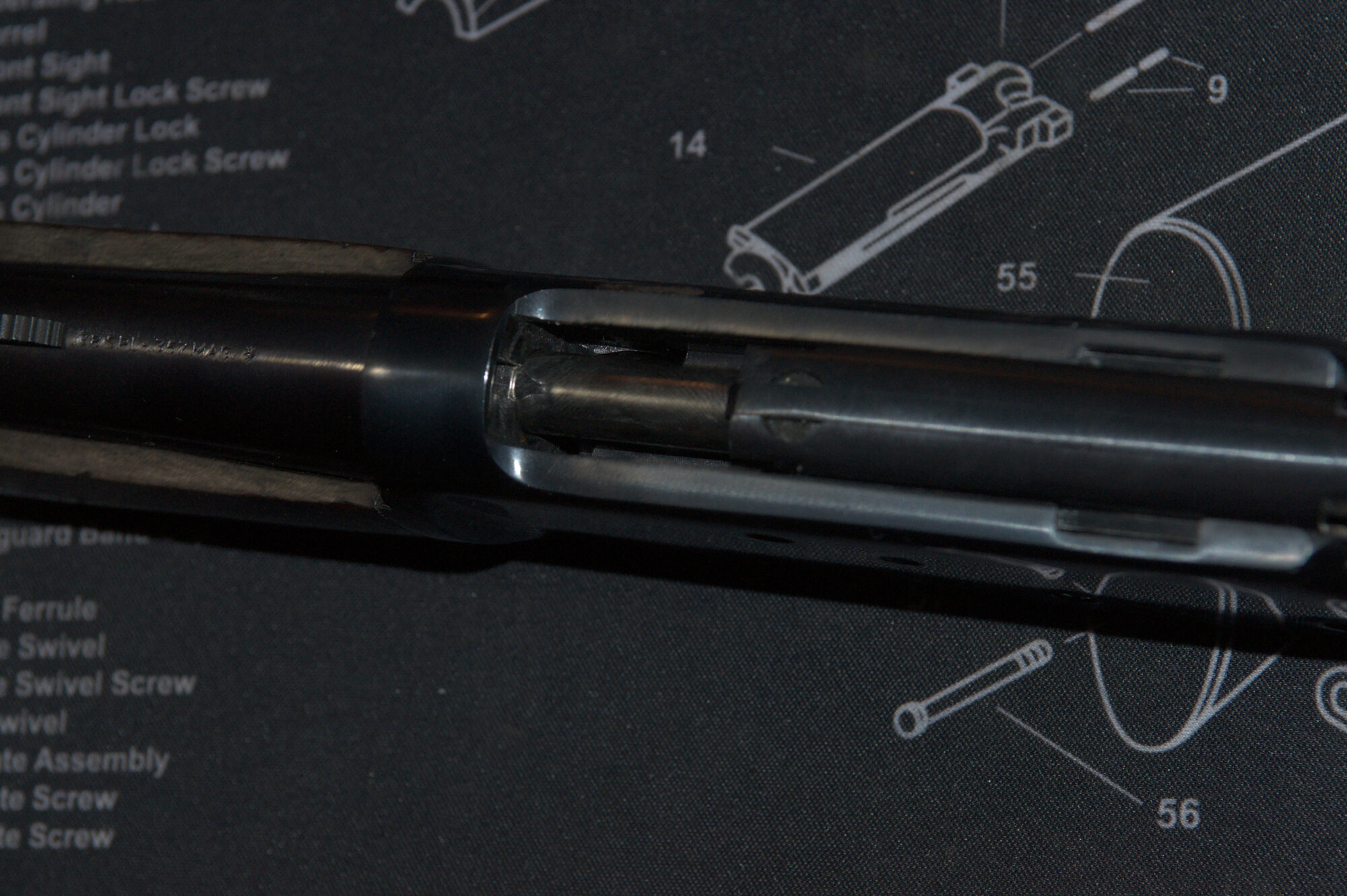 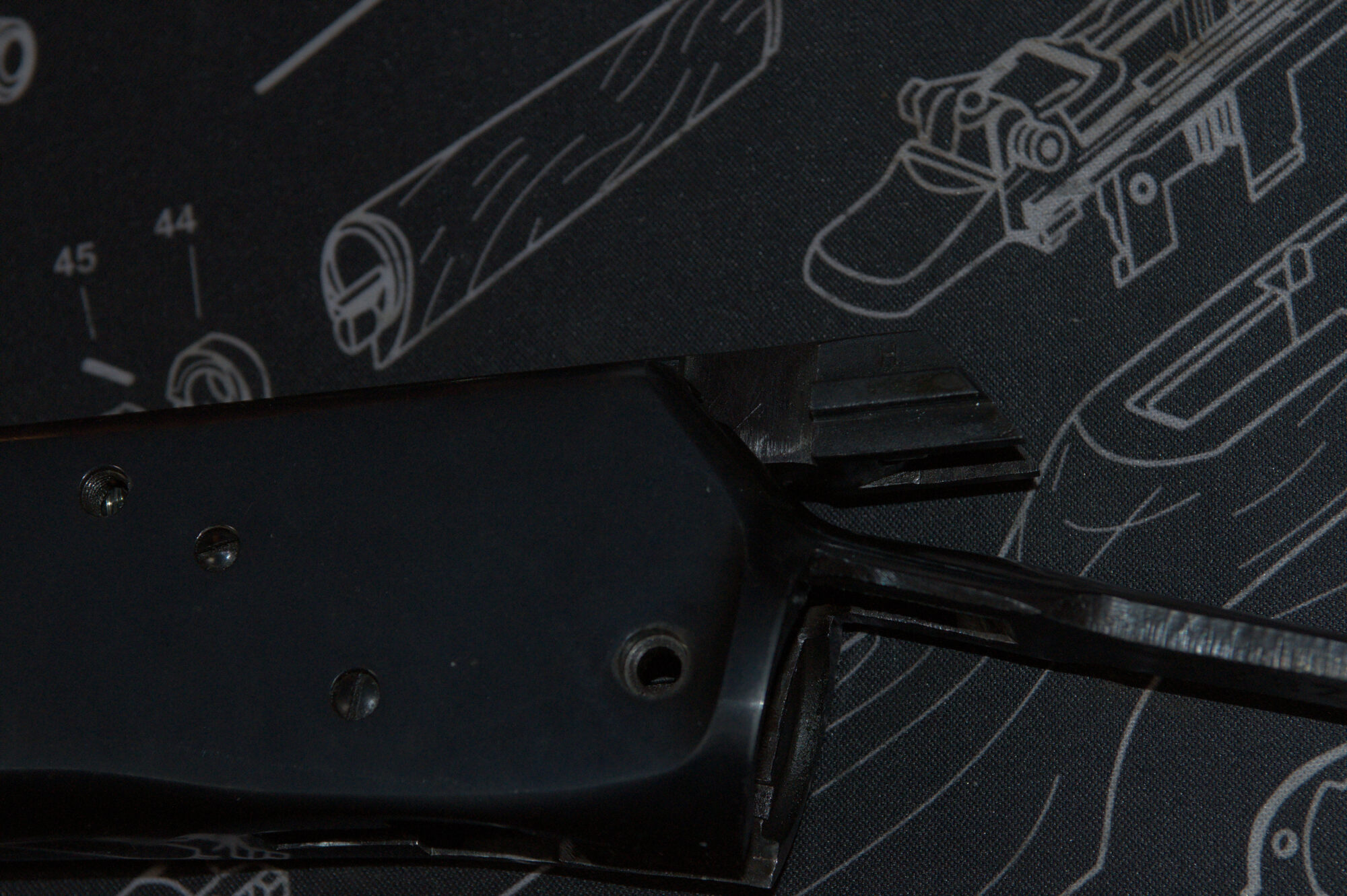 I do love my lever action rifles. They are a lot of fun to play with. They came in everything from .22LR up to a hard hitting 45-70. They come in different barrel lengths from light 16″ carbine lengths to longer 24″ rifles. Many can have scopes added to them, my 30-30 Marlin came with a scope. You can add peep sights with different adjustments. They are fast and versatile.

The downside is that they are complicated. Compared to an AR15 they have a monstress number of parts that you can lose. The amount of time it takes to get down to the point where you can clean them properly is a bit daunting. Screws come loose and have to be tightened as part of your preventative maintenance. It takes practice to be able to load them easily.

There is a limited set of angles that you can hold them in where they will function when cycling a round.

Still I’m looking for more. I want to add a .22LR to the collection.

One thought on “A Slight Addiction…”