This article came across my newsfeed:

Design of AR-15 could derail charges tied to popular rifle

A subtle design feature of the AR-15 rifle has raised a technical legal question that is derailing cases against people who are charged with illegally buying and selling the gun’s parts or building the weapon.

At issue is whether a key piece of one of America’s most popular firearms meets the definition of a gun that prosecutors have long relied on.

For decades, the federal government has treated a mechanism called the lower receiver as the essential piece of the semiautomatic rifle, which has been used in some of the nation’s deadliest mass shootings. Prosecutors regularly bring charges based on that specific part.

But some defense attorneys have recently argued that the part alone does not meet the definition in the law. Federal law enforcement officials, who have long been concerned about the discrepancy, are increasingly worried that it could hinder some criminal prosecutions and undermine firearms regulations nationwide.

“Now the cat is out of the bag, so I think you’ll see more of this going on,” said Stephen Halbrook, an attorney who has written books on gun law and history. “Basically, the government has gotten away with this for a long time.”

The government has gotten away with what?  The AR-15 lower receiver has been the serialized firearm part since the gun was first sold to the public.

This is some odd legal fuckery going on.

Cases involving lower receivers represent a small fraction of the thousands of federal gun charges filed each year. But the loophole has allowed some people accused of illegally selling or possessing the parts, including convicted felons, to escape prosecution. The issue also complicates efforts to address so-called ghost guns, which are largely untraceable because they are assembled from parts.

Oh for fuck’s sake.  This is some serious legal fuckery going on.  If it has a serial number, it’s an ATF regulated and controlled part.

I want to meet the defense attorney that says “this has a serial number on it, in total compliance with the ATF, but my client isn’t guilty because this isn’t a gun.”  How does that guy walk with balls that big?

Federal regulations define a firearm’s “frame” or “receiver” as the piece considered to be the gun itself. But in an AR-15, the receiver is split into upper and lower parts — and some of the components listed in the definition are contained in the upper half. That has led judges to rule that a lower receiver alone cannot be considered a gun.

The lower receiver sits above the pistol grip, holds the trigger and hammer, and has a slot for the magazine. By itself, it cannot fire a bullet. But by treating the piece as a firearm, the Bureau of Alcohol, Tobacco, Firearms and Explosives is able to regulate who can obtain it. Because authorities consider the part to be a gun, people prohibited from having firearms have been charged for possessing them.

How?  According to the ATF: “Firearm Frame or Receiver.
That part of a firearm which provides housing for the hammer, bolt or breechblock, and firing mechanism, and which is usually threaded at its forward portion to receive the barrel. 27 CFR § 478.11.”

In 2018, prosecutors said a ruling against the government would “seriously undermine the ATF’s ability to trace and regulate firearms nationwide.” CNN first reported the case and its implications.

“Any public citizen would be concerned about this loophole that we exploited,” said attorney Thomas Kurt, who represented defendant Richard Rowold. “As a citizen, I hope the ATF corrects this. As Mr. Rowold’s attorney, I’m grateful the judge followed the law in getting to the correct result.”

How did the judge come to the correct result?  This is a 40-year-old ATF decision that the entire industry stands by.  They made false statements to buy serialized components, that should be cut and dry.

The gun industry estimates there are more than 17 million AR-15-style rifles in circulation, and the National Rifle Association once dubbed it “America’s rifle.” AR-15-style weapons were used in attacks in Newtown, Connecticut, Las Vegas and Parkland, Florida.

In the case of Rowold, who is prohibited from buying or possessing firearms because of felony convictions, the government claimed that he used another man as a proxy to purchase 50 lower receivers. The 2018 indictment also charged him with having 15 lower receivers. Kurt declined to comment on why his client had the parts.

The case rested on the ATF’s claim that the components were legally firearms. Judge James Carr called that a “plainly erroneous” reading of the law and said the agency has a duty to fix the problem.

I’m absolutely flabbergasted here.  A serialized receiver is a firearm by definition.  I can’t shoot anybody with a 1911 frame, Model 700 receiver, or a piece of bent sheet metal with some number scratched into it, but those still require transfer through an FFL.  That’s been the law since 1968.

“Misapplying the law for a long time provides no immunity from scrutiny,” Carr wrote in his order to dismiss.

Federal prosecutors in Rowold’s case and several others declined to comment. An ATF spokeswoman would not answer questions posed by The Associated Press but said the agency is “keenly assessing” Carr’s decision.

The problem has attracted attention at the highest levels of law enforcement.

Prosecutors argued that the case against Alejandro Jimenez should proceed even if the part “does not perfectly fit” the legal definition. The judge dismissed the charges.

The decision prompted Lynch to write that if the ATF wants an AR-15 lower receiver to be considered a firearm under the law, then it should pursue “regulatory or administrative action.” But there’s no public record of the ATF taking such a step.

Am I taking crazy pills? 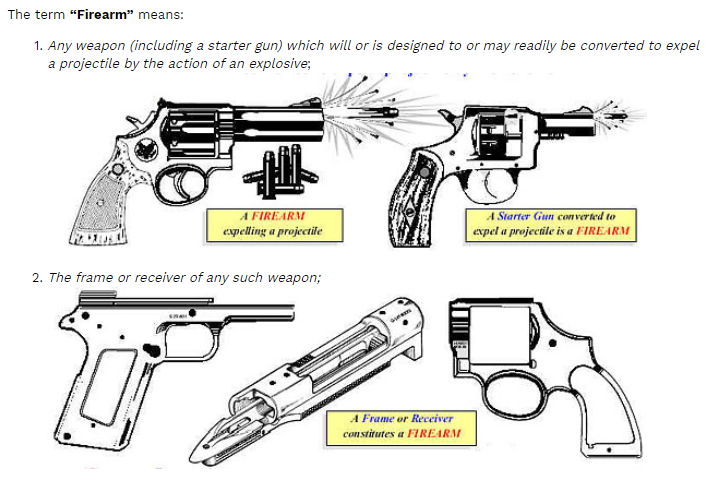 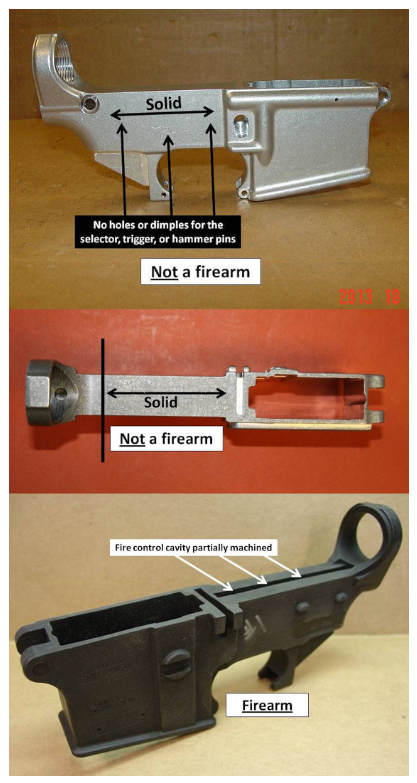 The AR-15 lower receiver houses the firing mechanism is the serialized part and therefore is a firearm.  I’m not sure what the how Judges are not getting this?

“I can’t imagine why no one has taken the initiative to correct this,” said Dan O’Kelly, a former senior ATF agent and director of a gun-training company known as International Firearm Specialist Academy. His testimony has guided several defense attorneys.

In April, for instance, an Oklahoma man was charged with illegally possessing a firearm after police who pulled him over found loaded high-capacity magazines and the lower receiver of an AR-15-style rifle in his truck.

Jason Scott Pedro, a 37-year-old with a felony record for domestic violence, was sentenced in November to seven years in prison.

In one case, an ATF expert testified that the same principle could apply to many other firearms. Prosecutors worry that more rulings against the government could allow people prohibited from having guns to purchase weapons piece by piece with no regulation or background check.

My suspicion is the opposite, I’ll get to that at the end.

Franklin Zimring, a professor at the University of California, Berkeley School of Law, is skeptical of that claim and said the same behavior could often be prosecuted under state laws.

The AR-15 is a popular model for gun enthusiasts to legally build at home. The rifles are sometimes constructed out of partially machined receivers, often called “80% receivers,” which can be bought and sold without background checks and need not have serial numbers because they are unfinished.

The media has found out about 80% lowers and talks out of their asses about it.  I wouldn’t consider the 80% lower thing to be “popular” and I most certainly don’t recommend it, unless you know what you are doing.  I have seen too many shitty home-built lowers that don’t run.  When I say tolerancing in AR receivers is important, trust me, I know what I am talking about from experience.

And long before 80% ARs became “popular,” you could buy stamped sheet metal unfinished AK receivers.  All you had to do was bend them around a mandrel and drill two holes.  A Harbor Freight hydraulic arbor press was enough to do it and make an AK out of a Shotgun News parts kit (my God, I’m old).

“From a public safety standpoint,” she said, ”this is very important and isn’t just an in-the-weeds legal definitional problem.”

There is “functional regulation of lower receivers.”  Every time an FFL makes one, they have 24 hours to put a serial number on it and record it in their bound book.  From there, it’s traced through every licensed dealer to the first point of sale.  If you make your own and intend to transfer it, you get to fill out a Form 1.

This is what I think is happening.  Judge Carr is a Clinton appointee.  He also went to Harvard Law, so I’m going to assume he’s an Ivy League dipshit.

Right now the ATF has established pretty solidly that the AR-15 lower is the serialized receiver is a firearm.

What is the point of a judge ruling that it isn’t?

If the lower isn’t the serialized part, is the upper?  Not by the ATF definition.  So are both halves the receiver?  So which part gets the serial number?  By ATF regulations you can’t have two pieces be the firearm because if you split it in half you have no gun, then you could make a gun by simply buying all the pieces separately.

What I suspect is this is, it’s intended to be a regulatory gun ban by throwing the AR-15 lower into limbo.  Essentially ordering AR-15 production and sale stopped until the ATF figures out what to do.

This isn’t the first time that happened.  The FN FNC had issues like that.  The ATF initially declared the lower to be the serialized part, then the upper, then they weren’t sure, and imports were halted until they figured it out.  Then it was banned from import altogether in 1989.

To me, this whole thing is ridiculous because I am very familiar with the ATF regulations.  But I suspect that what is being done here is not out of ignorance but being done with nefarious intent.