Actually yes Greg, that is the point

Democrats are Communists, while real Americans seek to emulate the Viet Cong. https://t.co/nDIBb8VWfB

The most insidious misreading of the 2nd is the idea the Founders meant to have an armed citizenry so they could overthrow the “free State” the 2nd aims to protect. What’s the point of the Constitution if you provided an out for violent revolution when voting doesn’t go your way?

This is a point I have made before and I will make it again.

This is the text of the Second Amendemnt:

A well regulated Militia, being necessary to the security of a free State, the right of the people to keep and bear Arms, shall not be infringed.

It is the only place in the Constitution does the phrase “free state” appears.

They can and should, and arguably are right now (though seemingly less every day), be the same thing.

Let’s say, hypothetically, that Trump was truly the despotic second coming of Hitler that the Left said he was.  Would a Hitlerian Trump America be a free state?

No, of course not.

And that is exactly the point.

To give the American citizenry the ability to engage in violent revolution when the United States stops being a free state and to reinstitute a free state.

The reason guys like Greg don’t ever see it this way is that when it’s Reichsführer Harris having General Honore and Director Chipman put every Trump voter with an AR on a cattle car headed east, that’s not tyranny according to him so the 2nd Amendment Veto doesn’t apply.

He says “What’s the point of the Constitution if you provided an out for violent revolution when voting doesn’t go your way?”

So let me ask this specifically.

Let’s say that the Republicans won the 2020 election, taking both the Executive and Legislative branched entirely through abject fraud.

The bureaucrats who run Federal Law Enforcement and the Military are loyal to the Trump.

First, our Constitution has no prevision for what to do in this event, and even if the Supreme Court tried to come up with some remedy, who would enforce the Judicial ruling?

So going into 2022 the message is: “We cheated and won, and since we’re in power, we’re going to do it again and again and there is nothing you can do to stop us.  America now has the same sort of elections as Iran, Cuba, China, Venezuela, etc.”

Would that be sufficient justification or “violent revolution when voting doesn’t go your way?”

Again, this is the reason Greg doesn’t like this argument.

One, just about everything the Left says was a Trump conspiracy turned out to be true.

Two, just about everything the Left says the Right does that is bad, is what they actually do, which in this case was the accusation that Trump stole the 2016 election with cheating.

So if we find out that the aforementioned hypothetical actually happened and the Democrats were the beneficiaries, Greg’s answer is “no, it’s not justified” because it’s his side that arms are turned against.

Our Founding Fathers were brilliant and principled men that gave Americans the ability to resist tyranny regardless of party.

So here is a simple rule of thumb: 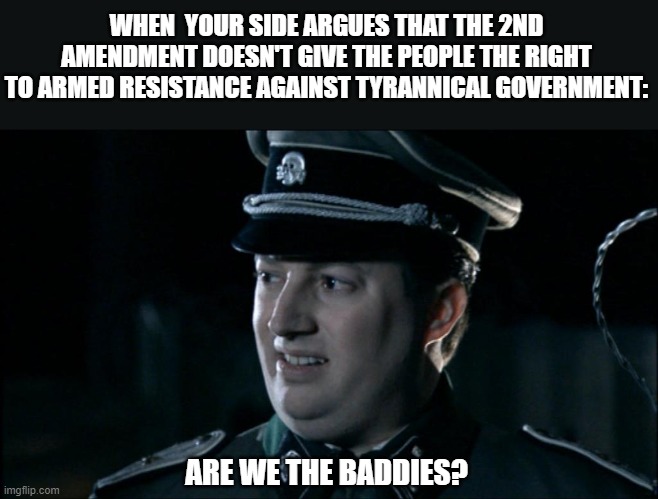 6 thoughts on “Actually yes Greg, that is the point”