And this is why you have to laugh at them

Believe it or not, CSGV has done it again: 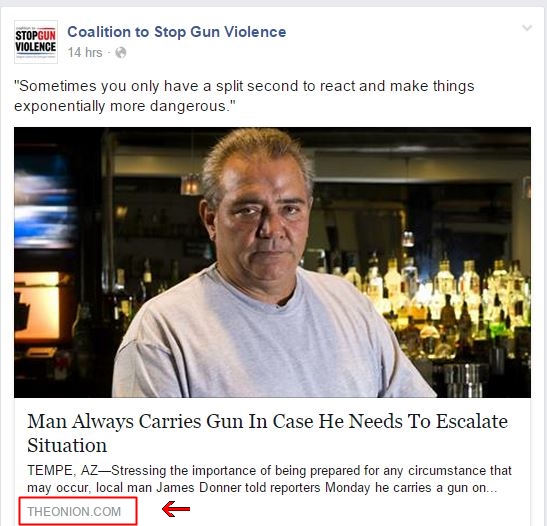 You’d think that after the level of complaints they had from their own followers about this old silly post, they would think things better and avoid making the same “mistake.” Apparently not.

But in the words of Earl Harbinger: “Once is an accident, twice is enemy action. There are no coincidences.” I am forced to think that they are doing this on purpose and for reasons that are obvious: They think everybody (including their followers) but them are stupid and that as long as the message, fake and all, gets transmitted, it is a win for them.  And they are partially right at least in one sense: the amount of followers that are not only willing to accept the lie, bit the other bunch that knowing it is a lie, are willing to defend it coming up with some intellectual contortions that would make a fakir double up in pain and collect disability.

I find it refreshing and hopeful to see the followers go at each other’s throats over the honesty of the post. CSGV is doing a much better job of convincing people Gun Control is riddle with snake oil merchants and con men than any mass mailing from the NRA.

I call that a win.