Another hashtag of guilt

I went to Twitter and saw the top trending hashtag for today is #BlackWomensEqualPayDay.

Oh on, what is this?

From HuffPo: The Pay Gap Is Severely Affecting Black Women, Yet Only 1 In 3 Americans Know It

Believe me, I’m getting beat over the head with it, I know it.

From MSNBC: 5 black women talk starting salaries, being underpaid and how they asked for more

The five women they talk to are in marketing, social media, and social activism.

The entire hashtag is about how for ever $1 a white man makes a black woman makes $0.63.  Clearly the reason is racism, misogyny, and institutionalize oppression.

Being an issue of intersectionality, people with this hashtag can’t help but tear each other apart.

White women on average make 21% more than black women. So “black feminists” need to wake up! They aren’t fighting for equal rights for all women just white women. Them hoes are not y’all friends! #BlackWomensEqualPayDay

The suggestions on how the right this wrong aren’t helpful.

So what does the data say?

More African-Americans are going to college than ever before. But according to new research from the Center on Education and the Workforce at Georgetown University, African-American college students are more likely to pursue majors that lead to low-paying jobs, setting up many for future debt and underemployment. And over time these occupational choices contribute to the wealth and opportunity gap between whites and blacks that spans generations.

“Basically, African-Americans have been going to the right church but sitting in the wrong pew,” director Anthony Carnevale said. “In a way they are using education to climb the social and economic ladder, but they’re being steered toward majors that will make them low-earners.”

African-Americans make up only a small percentage of some of the highest-paying of majors, including those in STEM and business. They’re only 8 percent of engineering, 7 percent of mathematics and 5 percent of computer science majors. Worse, Carnevale said even those who do major in high-paying fields, typically choose the lowest paying major within them. For example, the majority of black women in STEM typically study biology, the lowest-paying of the science discipline. Among engineers, most black men study civil engineering, the lowest-paying in that sector.

At the top of the list are Social Services and School Counseling.

Even the  Federal Reserve Bank of Cleveland has thoughts on this: Racial and Ethnic Differences in College Major Choice.

They provide three bar graphs which really explain everything. 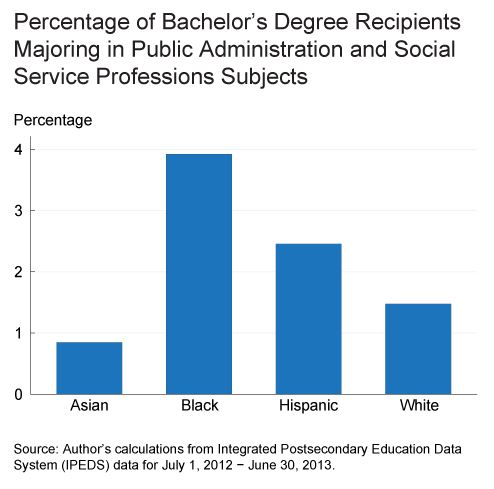 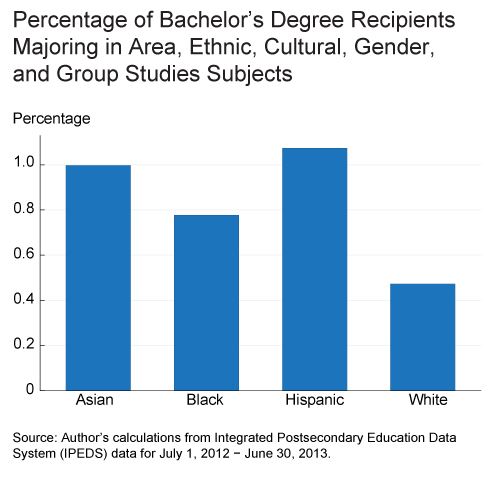 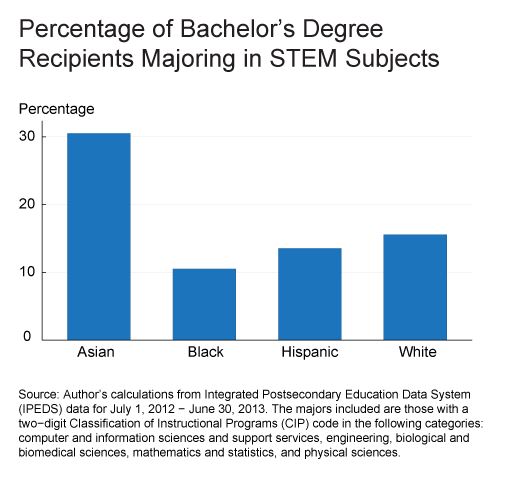 Unfortunately, everything I just said is racist.  The internet has decided that we need some sort of goverment intervention to correct this injustice.  Inevitably that means everyone will make less except for the bureaucrats, because that’s what goverment does.

8 thoughts on “Another hashtag of guilt”