How could the situation with Congresswomen Ilhan Omar and Rashid Tlaib get any worse?

Oof. Looks like both Rep. Omar and Rep. Tlaib shared this awful Carlos Latuff cartoon in Instagram stories yesterday. In 2006, Latuff came in second in Iran's International Holocaust Cartoon Contest, which is a thing that exists, in case you thought the TL couldn't get any worse. pic.twitter.com/uwyBPAsz7T

Here is the screengrab in its entirety: 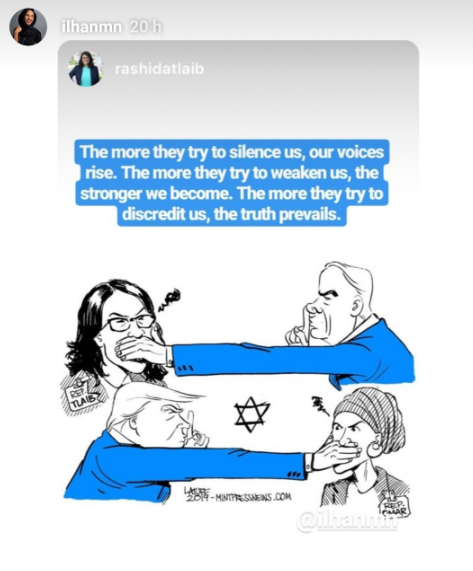 That’s Trump and Netanyahu silencing Tlaib and Omar with their arms making the Israeli flag.

Because not letting these two Jew-haters travel to Israel to use Israel as a platform for spreading their Jew-hatred is equivalent to silencing them.  To the rational person, it’s not.  To the standard of the Left, where “silencing” is anything short of a full-throated endorsement.

The cartoon is by Carlos Latuff.  Latuff is a Brazilian raging antisemite, anti-Zionist, America-hater, and socialist.  Just look at his WordPress site.

Not just does Latuff support the Palestinians, he justifies Palestinian terrorism using the imagry of the Israelis as Nazis.  He traffics in antisemitic conspiracies.  He supports Assad in Syria, the mullahs in Iran, and Maduro in Venezuela, and Chavez before that.

Pretty much, as an antisemitic socialist (which is redundant) he supports the worse people on earth.  His moral compass is pointed due south towards evil.

This is the person that Omar and Tlaib thought to promote by sharing one of his cartoons.  This would be tantamount to Congressman Steve King sharing a cartoon from The Daily Stormer.  Except that the media is screaming about this with their hair on fire  24 hours a day.

Readers of this blog know the of contempt I have for Bill Maher.  He is the zenith of coastal elites who have nothing but contempt for working Middle Americans.  I generally regard him as a piece of shit, but I will give him credit where it is due.  And where that is due is that he is right on Israel.

This is from his show.

He’s right, and the Democrats are going to fail this test.

This overt antisemitism by Tlaib and Omar is obscene.  If the Democrats do not condemn this and the Democrat party’s transformation will be complete.

One thought on “Antisemitic Congresswomen Tweet cartoon from raging antisemite”