A Huntsville family has less than 20 days to find a new home after their home was raided.

Travolta Garritt said his family was awakened to loud door knocks at midnight on January 24. Exclusive Ring camera footage showed officers moving in and banging down the door at Westlake Apartments, breaking the porch light, and then destroying the doorbell camera immediately ending the recording.

According to the family, a search warrant was received two hours into the raid stating police had probable cause to search the home. Officers with the Huntsville Police Department were there assisting the FBI Taskforce in locating 55-year-old Lawrence Jones. Jones was arrested in connection to four Regions Bank robberies in Madison and Huntsville.

Jones’ ex-girlfriend lives in the home but the family said they are not together and had no knowledge of the robberies. Jones was not inside during the time of the home.

Family members said they were handed a 30-day eviction notice the day after the raid, claiming Jones was arrested at the residence.

“We got less than 20 days to find somewhere to stay for something we didn’t do,” said Sarika Eason, who lives inside the home.

WAFF 48 spoke to attorney Russell Crumbley who is not involved in the case. He said officers need to have thorough evidence before entering a home.

“They have to be particular about this place to be searched. They can’t just say they believe there’s going to be illegal stuff,” said Crumbley.

So the police destroyed a woman’s rental home during a raid, based on a search warrant obtained with shitty FBI information, and lied about the suspect being at the residence, causing this woman to be evicted.

When you’re evicted for breaking the terms of a lease with criminal activity, it’s almost impossible to get a new lease.  That comes up in a background check.

So the police fucked this woman over hard.

The police should be held liable for shit like this.

If the police conduct a raid, unless they arrest the suspect that location and obtain a conviction, any property damage done during a raid needs to be fixed by the police and any material harm done to the tenant or property owner needs to be made right.

Watch the overuse of raids fall off a cliff if that happens.

Feast your eyes on this garbage: 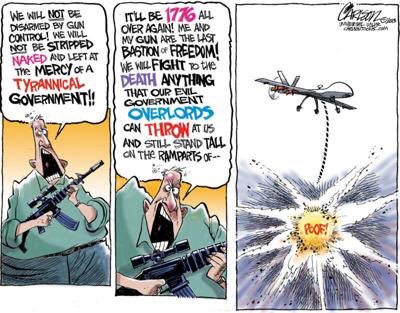 Let’s break this down.

The government clearly violated the Constitutional rights of this gun owning citizen.

He states that he will resist the violation of his rights.

The government kills him in a drone strike.

The entire thesis of this cartoon is “tyrannical might makes right.”

The government can violate your rights and then assassinate you with a drone, so all you should do is acquiesce to their tyranny.

I don’t accept that.

Moreover, the cartoonist just loves the idea of his political enemies being idiots that get slaughtered in drone strikes.

The Left has never come across a problem that the preferred solution isn’t exterminating some particular group of people.

But once again, I am compelled to point out that the tactic of “kill them with a drone strike” that has been used with such effect in the Middle East only worked because the drone pilot’s family, and probably the drone pilots too, were not neighbors to the people being drone struck.

Does the cartoonist really want to celebrate some American gun owner being killed in a drone strike, when the cartoonist’s personal information is probably readily available to the friends and loved ones of the dead gun owner?

They think this will be idiot gun owners homes getting hit with Hellfires and everything going swimmingly afterwards.

That have no idea what war is like when the people doing and cheering on the deaths of Americans send their kids to the same school as the people they want dead.

Things get ugly under those circumstances.

“I’m proud to support law-abiding gun owners across America with this commonsense legislation that would let them concealed carry in all states that allow it,” said Cornyn, who sits on the Senate judiciary, finance and intelligence committees.

The measure treats state-issued concealed carry permits like drivers’ licenses, as people can use their home-state license to drive in another state but must abide by that other state’s speed limit or road laws.

This is the the way it should be, and now that Bruen has made all of America shall issue, there is no reason not to have 50 state CCW reciprocity.

But Biden won’t sign it and the Republicans don’t have a veto proof majority.

But maybe if the Republicans win the presidentcy in 2024, there is hope for this to be passed into law.

Clean up in the classroom… pic.twitter.com/K9RDGSZokA

If you go into the comments, you will see a number of people claiming that the boy deserved this because he said the n-word, which was not caught on video, or that he must have deserved it because why else would he be hit like that.

Obviously when a white make gets beat over the head with a dustpan, he deserved it.  That’s the zeitgeist.

I’ve said this before, there is a trend of white people, especially white boys, being baited into becoming the recipients of violence.

And this boy was unfortunately smart enough not to fight back so that the viral video was a white boy beating a black girl.

But that doesn’t change the fact that he was hit in the head with a weapon three times.

This is winning in San Francisco

SF is about to start issuing a lot more concealed carry permits; here’s what that means

As Democratic lawmakers call for stricter gun control in light of the mass shootings in California, one gun law in San Francisco is now loosening.

The San Francisco Sheriff’s Department has just approved its first concealed carry weapons permit since a Supreme Court ruling last year eased the eligibility requirements around who can carry a firearm in public.

A concealed carry weapons permit, or a CCW, allows ordinary citizens to legally carry a gun in public. For years, San Francisco law made it nearly impossible to get one. San Francisco Sheriff Paul Miyamoto said that prior to the ruling, only someone considered to be a target, like a judge or a diamond jeweler, could have been eligible for a license.

Let that sink in.

You cam protect yourself in the festering shithole of San Francisco, but a judge can.  Because judges are special and well connected, and you are not.

“The significant change from the Bruen decision was that they took out the ‘good cause’ requirement for someone who is applying for a CCW license,” Miyamoto told ABC7 News. “Which basically means as long as you clear our vetting process, our background procedures, and as long as you take a safety course and demonstrate you’re responsible, you’re given an opportunity to have a license.”

Miyamoto said so far the city is processing 72 applications, and they expect to get nearly 100 to 200 more over the next year. “Which is very different from the four we processed in the past 10 or so years,” he said.

Remember when Asians were lined up around the block to buy pepper spray after multiple public attacks on Asian women and Asian business owners?

People are going to swamp the SFSD with applications.

The Bruen decision was these best SCOTUS decision since Heller and McDonald.

When you can carry a gun in San Francisco, you know you’re winning.

If you are in San Francisco and your pro-gun election last for more than four hours, see this thread here. END_OF_DOCUMENT_TOKEN_TO_BE_REPLACED

He warned her… Multiple times… pic.twitter.com/P15dryrP4J

He did, he warned her.  He tried to keep her at arm’s length.

She kept advancing and swinging on him.

When she got up notice the shocked look on her face.

She was totally expecting not to fund out from her fucking around because she’s a woman.

A man is not supposed to hit a woman.

But a man is allowed to defend himself from violent attack.

She got tossed and deserved it.

She needs to rethink her reality.

When a woman fucks around, a woman can find out.

Once again I’m about to spend almost $500 on heating oil for a month.

Heating oil is effectively diesel, so right on about $5/gal.

I have a combination closed circuit hot water radiator and on demand hot water heater, so both my house heat and hot water are fired from from the same oil boiler.

I keep my thermostats off during the day, but between the little house heat I try to use and hot water, I’m using just under 100 gallons per month.

I’ve been told that actually that’s pretty good using about 3 gallons per day in winter.

Still I hate the fuck out of it.

I have access to all the free wood I want.

All the free wood I want is used pallets and wooden shipping crates.

I worked in a fabrication shop where our boss burned pallets and shipping crates to keep the shop heated.

It worked, but it wasn’t the best smelling fire.

I want a wood burning furnace that sits outside of my house and blows the hot air into my house with ductwork.

I want a supplemental heat source.

I want something to heat the house so I don’t have to kick on the furnace at all, or as little as possible.  If u can cut my oil use in half, just as a hot water heater, I’ve come out ahead.

Apparently units like what I want existed but have been discontinued.

I don’t know if they have been regulated out of the market.

If anyone is familiar with what I want or has an idea how to set it up, I’d be appreciative.

I have no shame in heating my house with pallets to save money.