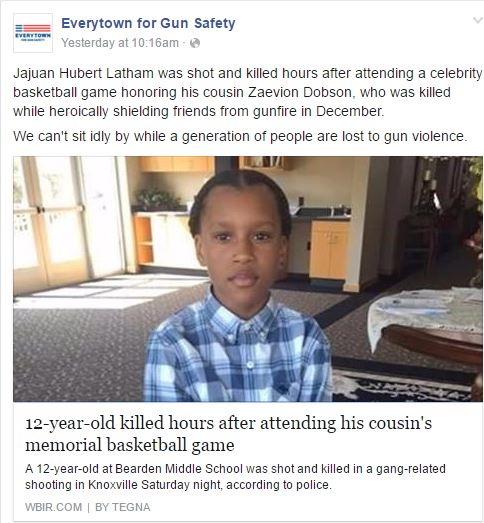 This story is heartbreaking and I feel nothing but empathy for this family that lost two innocent children in gang shootings.

Enter the antis over at Everytown who know EXACTLY who to blame for this tragedy, and why.

Of course it is the NRA’s fault.  If the NRA didn’t donate to politicians these boys would still be alive.

Except, not. Knoxville Police Chief David Rausch chimed in on this shootings with an amazing level of wisdom and insight:

“The violence has got to stop, this can’t go on. We do not need to bury anymore children.  It’s my gang is better than your gang. That makes no sense to me.  They’re cowards.  A coward shoots blindly at a crowd.”

Chief Rausch laid the blame for this not at the feet of the NRA or politicians or law abiding gun owners but on gang culture that perpetuates violence.  Be it Knoxville, New York, or Chicago, it is this gang honor culture that results in bloodshed.

But that fact doesn’t fit the anti’s narrative, so rather than going after gang culture, they go after gun culture – which are not synonymous.

I am reminded of the quote by former Israeli Prime Minister, Golda Meir, explaining the moment that Israel will find lasting peace:  “Peace will come when the Arabs will love their children more than they hate us.”

I believe that this applies to gang culture as well.  Gang violence will end when the predominate culture values life more than it values territorialism, reputation, vengeance, or the other cultural attributes that make it acceptable for gang members to shoot each other on sight.

Law abiding gun enthusiasts (or dyed-in-the-wool guns nuts such as myself) are not a contributing factor in gang violence.  If I had a nickel for every shooting I’ve ever read about, caused by some member of Ducks Unlimited wandering into Safari Club International territory… I’d be broke.  Because it doesn’t happen.

BTW, you can spot those Duckers by the Mossy Oak Shadow Grass Blades camo they wear.  Realtree AP for life, bitchez!!!

Also, I love how Ms. Maxie seems to have no problem with gang violence as long as it is conducted without guns.  If fist fights are OK by her, does she have an issue with knife fighting?  Sure some people got killed in in West Side Story, but since there were no guns in it, it was just a cute little rom-com musical.