Ugly as sin but interesting concept. From what I gather is a big deringer shooting 12 gauge less-lethal ammunition. 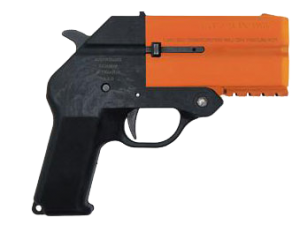 And you are asking: Does it shoot regular 12 gauge? but I figure you don’t want to play with buckshot on a plastic gun like that. And you know some idiot will try it…once. (UPDATE: Apparently newer models cannot be loaded with lethal ammo and older models can be retrofitted to do the same.)

I have no experience with this type of weapon, but I would not have it as stand-alone. I do believe that any viable solution to an encounter that does not end up with somebody bleeding and/or taking a ride to the hospital or morgue, is a good one. Do remember that if you shoot somebody close enough with bean bags or rubber balls at the right location, you will kill him. Always keep the recommended distances.

The cost is $650 and comes with a holster  and bean bag ammunition is $23.75 per box of five. I figure that you could safely shoot other types pf Less Lethal such a Pepper Blast, but I would recommend contacting Bruzer and ask them directly. OAW /NFA rules apply.

So yes, in my very uninformed opinion this might be a very good option.