Surfing in Blood (part 4) More on the Media, Politicians and Mental Gulag.

As usual, these are not all the emails between MAIG and the NYC government regarding Gun Control and I even doubt the cover all the emails requested by judicial watch. Not they are all the emails about Sandy Hook out of MAIG during a specific time frame (I forgot to say that before).

I posted this image before, but this time I want to point out (as readers have already done, that some Republicans like McCain are considered allies for our enemies.

Or certain Republican Governor that has fallen from his pedestal lately: 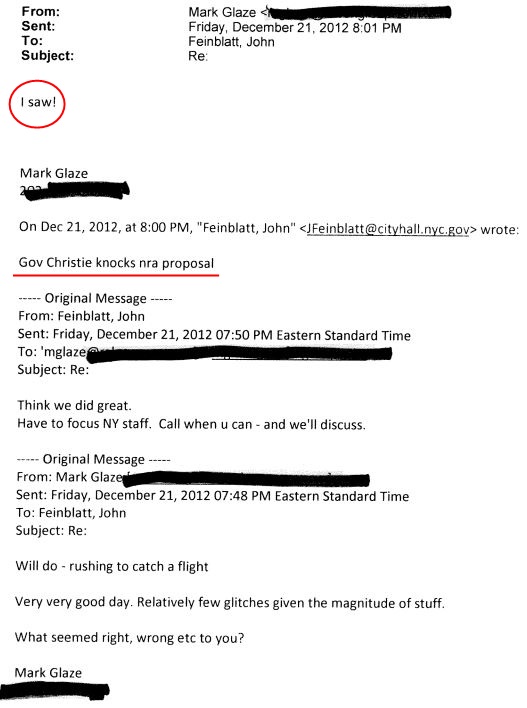 A ghost from the past reappeared:

But the “Do Not Touch With A 10 Foot Pole” rule seems still in effect.

This is a part of an exchange between Mark Glaze of MAIG and Abby Spangler from Protest easy Guns. Apparently Mark has a pool or reporters at his beck and call to attend Anti Gun efforts. 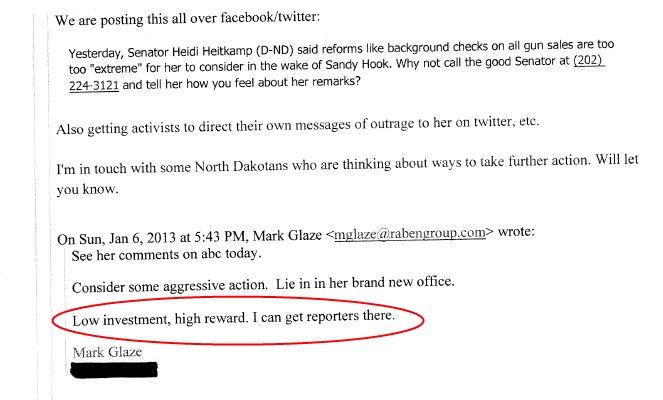 But the attacks on Senator Heidi Heitkamp seemed a bit too much (maybe because she is a female senator) that MAIG started to have second thoughts. 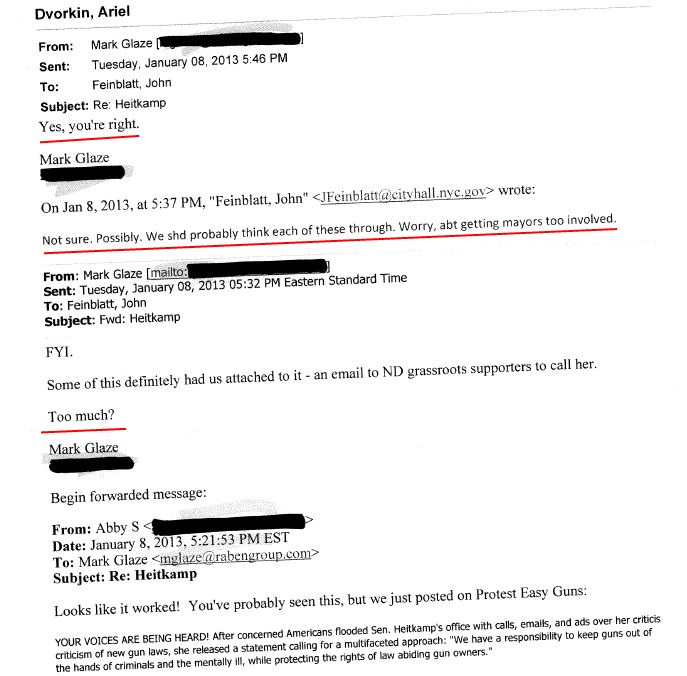 In other news, not all ducks appeared to be in a row when it came about the Vice President’s Task Force. Bloomberg has his own private Anti Gun Think Tank firmly installed in John Hopkins University (The Johns Hopkins Bloomberg School of Public Health’s Center for Gun Policy and Research) but they had no idea about who was going to be who or had contact information. Somehow me thinks the White House does not like the “biggest” Gun Control Group out there or they are afraid that the spotlight would be re-directed to Bloomberg instead of the President. 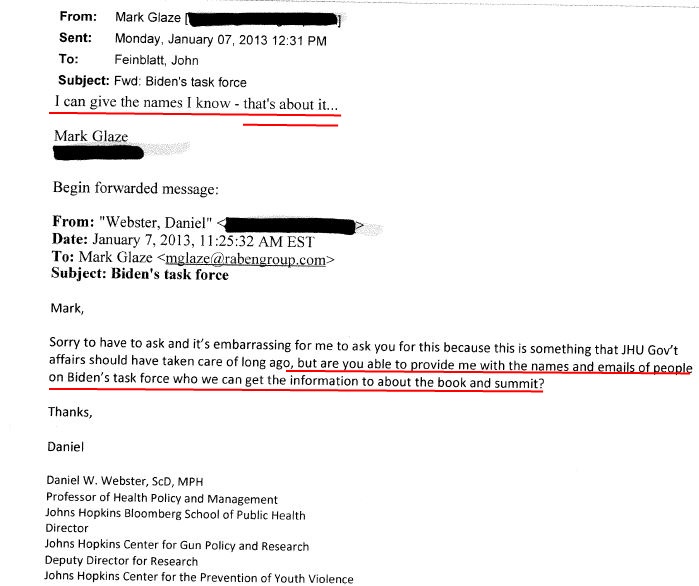 I just mentioned The Johns Hopkins Bloomberg School of Public Health’s Center for Gun Policy and Research. They had their own little conference to address the issue of gun violence and this was one of the things proposed by the attendees:

This is 100% Soviet Anti-Dissident strategy. If you are not with the Gun Control cause, you must be crazy therefore invalidates you from owning guns. It is bad enough when it was only supposed to be determined by a physician/shrink since we have seem so many of them being Anti Gun and therefore inclined to slant a determination, but now we are adding a whole bunch of “experts” that will make the expansion of the Brady Checks a mockery. Just take the Schools and remember all the cases of “Zero Tolerance” stupidity we have heard in which  kids are being kids but are treated worse than felons. Imagine a 6-year-old now getting a jacket as mentally unstable because he went pew-pew-pew with his fingers during recess. And of course, that is going follow him not only for guns but for the rest of his life in other endeavors.  It is the Gun Control equivalent of the No-Fly list.

A gentleman gets arrested and he is being processed at whatever local jail… facepalm.

I am taking a little break from the Surfing In Blood series… I think one or two more post simply won’t do it, specially when relating to the monies. Lots of cash flowing in 2012 one private entity to a public one and vice versa.
But since I am not an accountant, I have to decrypt this enchilada.

However, I want to leave you with this clear example on how much grassroot support they really have. Look at the number of alleged active supporters and the number of people who actually gave money. 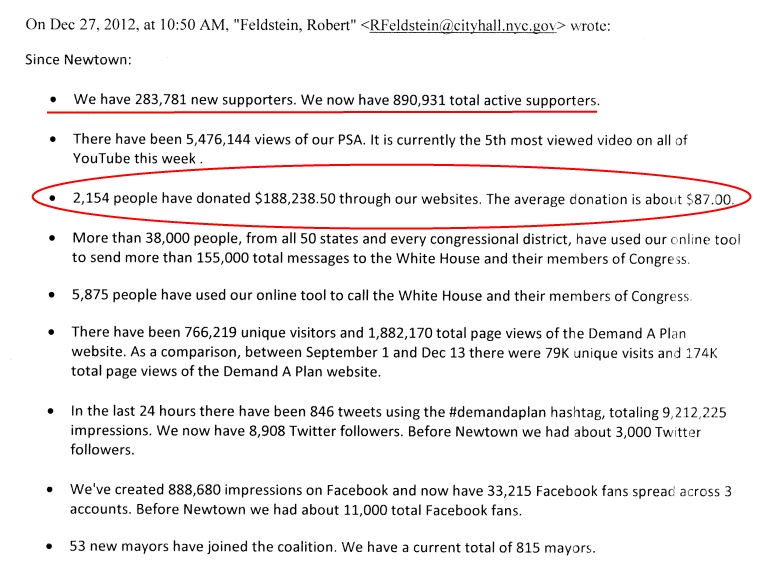 Only 0.24%  of the 800K+ “supporters” care enough to send money. Then again it is easy to support something that does not cost you..either monetarily or any other way.

Just for joining their email list! But I know that you will be willing to spend the amount of one miserable box of ammo and join Florida Carry and keep supporting them.

Gun Motivator of the Day: Get Off My Lawn (The Nuclear Option) 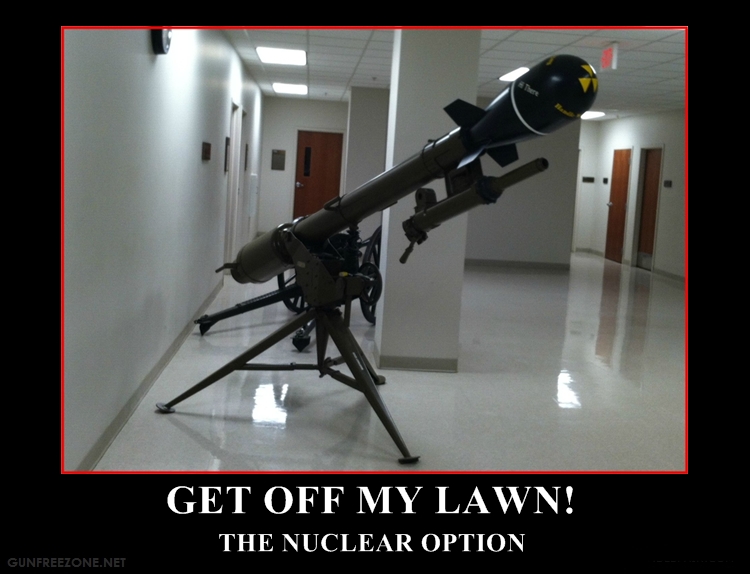 Brady Campaign: They like to see more people killed!

You have to love knee-jerk reactions coming out of the Opposition: 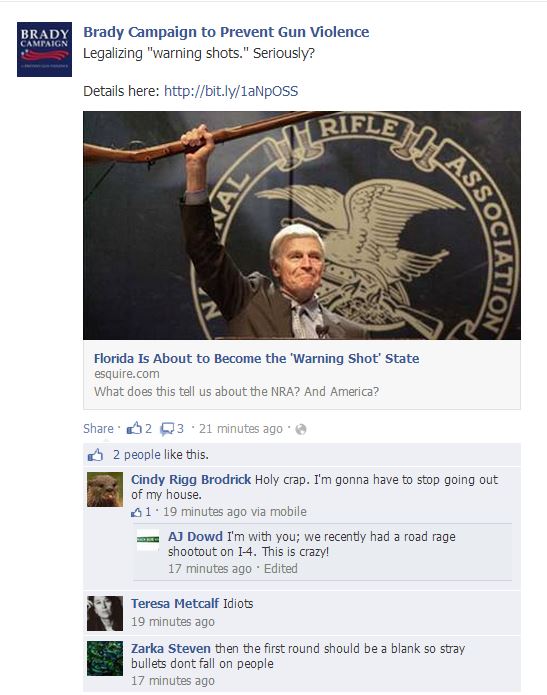 The article they mention is from our favorite Anti-Gun Gome Pyle, Lt. Col. Robert Bateman. As usual he does not make a whole lot of sense and raves up and down so I will save you the effort and say he does not like the law, the NRA, you, me and probably Moon Pies either.

At the Florida Legislature, both houses have versions of the Defensive Display of a Firearm on their desks. It simply states that you can display your gun without having to shoot the criminal to stop a forcible felony instead of being sent to prison for it.  This law is basically intended to curb idiotic and anti-gun prosecutors from filing charges on obvious cases where a bit of common sense indicates that having nobody bleeding is a much better choice than having to call the morgue truck. But it seems this obvious detail is hard to process for a Gun Control Advocate.

And as usual, the comment pouring out of the Brady followers are enlightening on their own. Apparently the idea that a warning shot must be done vertically and up is firmly planted in their heads…. must be prime time TV and all those action movies they swear they never watch:

Carolyn Purdue and install a bullet-proof roof on your house. What goes up must come down…somewhere.

Kenneth Keith They are pushing for revolution because a black man is in “their” White House!
Meg Rose-Petersen Dumb f’n Florida! I hate this state!! Do they not get that what bullet goes up, must come down? I can’t wait to see how many cars, homes, bldgs, etc have bullets stuck in them. POS, DB, NRA and it’s penisless bought off legislators and extremists.
John Lemieux Why? In Florida you can just shoot someone dead and say they were attacking you, why bother with warning shots?
Q Tracy Rogers Now that is another example of “responsible” gun owners huh? No concern that, the bullet has to land somewhere? A small part of hope for the future should be noted- when the bullet lands, if it hurts anyone or property another gun owner becomes a felon and not allowed to own anymore. (and I say without joy, they usually hit themselves or a family member).

Dear Oscillating Mother Of Petunia…. what a bunch of idiots.

Surfing in Blood (part 3): A little bit of everything.

Starting with these are not all the emails between MAIG and the NYC government regarding Gun Control and I even doubt the cover all the emails requested by judicial watch. Not they are all the emails about Sandy Hook out of MAIG.

On this post, I am not going to be structured much. Reading 500+ pages of crap I do not like in a day makes for an interesting headache. I’ll post captures of the documents that reveal ideas, tendencies or thoughts not covered before.  Originally I was going to end the analysis of this emails today, but rereading I found some other stuff that might require attention and hopefully some help from the readers, specially the monetary part. So expect at least one or two more posts. 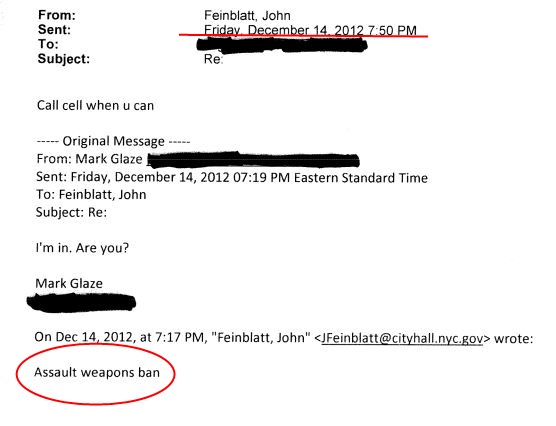 Note the date and time. The bodies of the victims were still on the floor at Sandy Hook Elementary as the Crime Scene technicians were collecting evidence. Yet this “persons” were already thinking strategy. 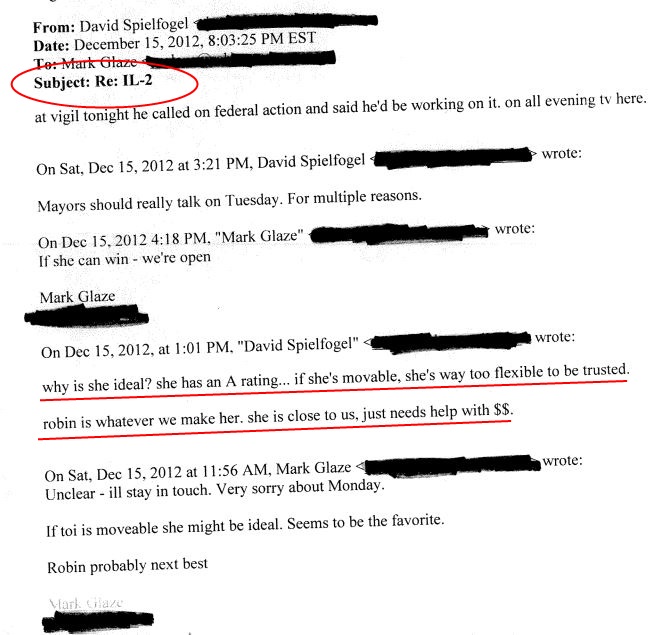 The Robin mentioned apparently is Robin Kelly who was the Democratic Party candidate and eventual replacement of Illinois’ 2nd Congressional District Election previously held by one Jesse Jackson, Jr. who had to vacate the post after pleading guilty to charges of fraud, conspiracy, making false statements, mail fraud, wire fraud, and criminal forfeiture. Cash was injected from Bloomberg’s coffers to her campaign. Bloomberg & NYC employees meddling in the elections of other states in a strategy that was to be repeated in Colorado.

And we have some examples that seem to infer at a minimum a concerted coordination with a complicit media: 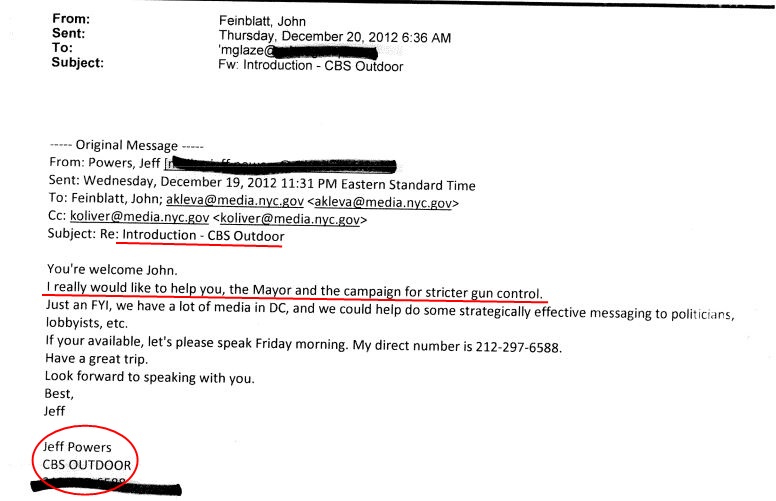 An idea to try to influence major Sport Leagues: 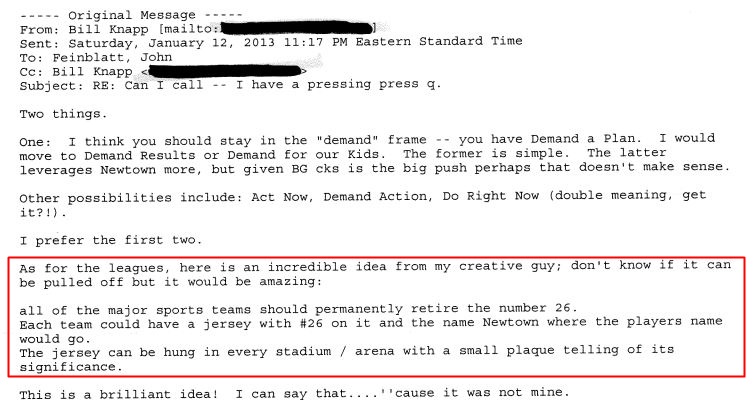 And MAIG really does not like the Brady Campaign.  Are they wishing the Bradys leave the Gun Control business for good? Who knows?

Remember that Credit Cards and other companies were all of the sudden reluctant to deal with firearms? May it have started here?

The Raben Group is a powerful DC Lobby group aligned with very powerful entities such as the Joyce Foundation, Rockefeller Foundation,  Los Angeles Unified School District (Which wanted to divest  firearms investments from their retirement fund) and a whole slew of other well-known characters including….wait for it… MAIG.