When you see it, you will say “Hell Yeah!”

Larry Correia writes the weirdest stuff. For somebody like me that is not into the sci-fi/monster/horror/UFO/Strange Creatures beat, I do admit I enjoy peeking into his mind through his books. Next thing you know, there is a great logo inspired by one of his works and the coolest thing is that his share of the pie goes to Baen Books’ Operation Baen Bulk to pay for shipping supplies to troops overseas.

So order a T-Shirt, get Larry’s books and you will be doing a great service to our guys fighting in the sandbox.  You can order via Mystikwaboose@yahoo.com to order and click here for sizes and prices.

Time to control your boys before shit hits the fan. (Part 1)

It is no secret that I hold serious contempt for  the 3% crowd. From what I have personally seen, most of them are one step removed from Internet Ninjas and those kids that dress all tactical to play with airsofts. No, I don’t know how the movement started or who did it and I couldn’t care less but one thing is certain: the founders of this thing will be facing a shit storm soon enough if they don’t have their kiddies tone down the rhetoric.

I know I am not the only one sick of the NO COMPROMISE hollering and then the sudden silence when one request proof their achievements. We are tired of the innuendos, accusations and falsehoods spread all over the interwebs just because or for whatever idiotic reasons they have to insult and belittle those who are actually are doing something but does not meet their stringent criteria of No Compromise, a criteria that besides impossible to realize, they designed from the comfort of their couches while typing warrior-like posts in their favorite forums.

I happen to be the target of a local ThreePer who believes I am the reincarnation of Uncle Joe Stalin. This particular Idjit and I have butted heads in a private forum I administer because I have dared to: 1) Challenge his bullshit and 2) Remove posts that are not in concordance with the forum mission statement (and that you must agree to belong) but he chooses to ignore and 3) Open hostility against any Law Enforcement personnel which is dumb when you realize that about one third of the membership is LEO from local, state and federal levels .  Mr. Idjit is “preparing” for the “upcoming civil war” and I am guessing he is doing his sick version of Santa’s List and checking who is a patriot and who is not under his nutjobbery standards.

So far we have managed to avoid real life confrontations when we are at the range. Mostly I ignore the shit out of him, but the tension is palpable. If you look hard enough you might see a dribble of foam in the corner of his mouth whenever i pass by. I know that he has been issuing less than nice comments about me at the after matches reunions some shooters have at the local beers & wings establishment and some of the fellow shooters have informed me so. It was not the comments themselves (I’ve been called asshole once or twice before and sometimes with reason) but the level of hate and vitriol spewed has been such that people have felt the need to warn me. Initially I did not give too much care about that, but when I started to receive this messages, my view changed a tad:

you need to be removed. you are nothing more than a petty tyrant that uses his position to silence and obstruct opposition. when you go, take rob with you. understand that i will be sending a like message to him. love and kisses.

your days are numbered. do you not understand that the men i establish bonds with at (local eatery), (another local eatery) , and (another local eatery) far exceed your influence? i suspect that has a lot to do with it. you have no influence except for your petty tyranny. that and you being a socialist and all. you are a dry twig after the summer. winter will see you fall from the tree

And a third example:

again, your days are numbered. slowly but surely, day by day, deleted posts by deleted post, you dig your own grave. i have but one mission in life now, and that it to see you relieved. you are nothing more than a petty tyrant. *spit*

I am not worrying too much, but then again I am not turning my back when this asshole is around. We have already lost members because of this guy’s attitude and absurd verbal bellicosity. As one other threatened member has said “for all the talk about revolution, this is probably the kind of guy that will dig a deep hole and hide when the bullets start coming his way.”

So what is it to you? You are probably saying: “Dude this is your particular and very local problem. One crazy dude.” The problem is I am seeing more and more of the same blundering BS posted by other 3Pers in forums and blogs across our patch and in every state of the Union. The formula is usually I Hate LEOs-I Hate NRA-I Hate .Gov-I Hate You For Disagreeing with Me. They are visitors of certain No Compromise blogs and brand as traitor anyone who does not agree 1,000% with them. They see those who have a different view as rats against their version of the Cause for Freedom and I wouldn’t be surprised if some are having their own little Robespierre plans on how to deal with us.

The only problem is, we ain’t SanFran Hippies easily cowered by their attitude. Do not wish war, fire and brimstone upon us, you may not like our response.

I got my new M.H.I Patches.

So I am giggling right now after getting a letter from a remote location in Utah.  The new M.H.I. patches are now in my possession and once again I find myself wondering what piece of clothing can be deserving of have them attached.  A cap i had with the original M.H.I. patch is in the possession of a buddy of mine who became a rabid fan after I recommended the book for Summer reading (or was it Fall?) 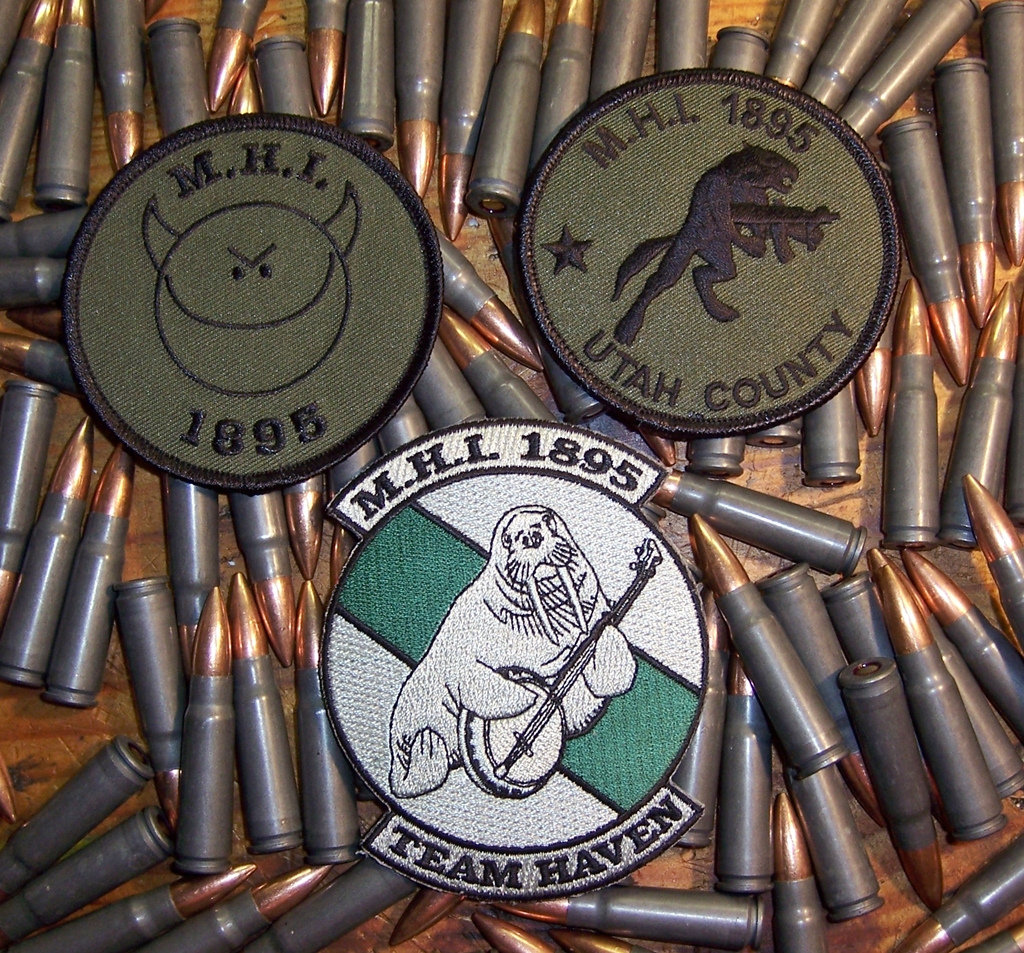 Book wise I am a confessed 100% Luddite, so begrudgingly I have to say that Monster Hunter Vendetta is now in what is know as Electronic Advanced Reader Copy. If you are a fellow retrograde, you can order your advanced paper copy via Amazon and avoid all the electronic boys and girls commenting and giving away spoilers.

Any dissolute that dares post a spoiler in the comment section, shall face my wrath in the form of a visit by a pack Canis HugoChavez: a sadistic animal that is the cross or a Chupacabra with a delusional Warg.

Ben asked me to marry him on Nov 14, 2007 on the karaoke stage. Ben has been gone now for just over a year. My husband was murdered right before my own eyes by a man that had been stalking me. I am a right to carry permit holder but because of Tennessee State Law, I had to leave my legal “permitted” weapon locked in my car the night my stalker decided to bring his “illegal” gun into Johnny’s Sports Bar (where Ben & I were running our Karaoke Show) and shot Ben 6 times after I had asked management to remove him.

The blog is called Why would anyone possibly need to have a gun? She knows. Welcome to the Gun Blogosphere Nikki and we are so sorry for your loss.

Serious Hat Tip to Sharp as a Marble.

Tam has a nice way to tell Mr.Mueller that his urination is missing the receptacle.

We have guys with their jockeys full of Semtex buying airline tickets with cash, and the feds are busy getting spun up about bubbas in Mossy Oak angry about taxes. Way to keep your eye on the ball..

Damn it, I wish I could write like that.

I am gonna be humming it all day.

Tam’s going to Knob Creek…probably she is there by now. She composed a little verse in celebration.

Beltfeds and subguns and antitank rifles,
Loud GE Gatlings that ear muffs can’t stifle
Cannon and mortars and Tannerite fun
These are a few of my favorite guns!

I am gonna be humming it all day long while soaking in envy. Nothing like full auto to brighten up your life. Tam, enjoy  it for us mere mortals.