An opinion piece by David Plazas published in the local rag, unfortunately behind a paywall, but they allow a PDF download of it. It seems that unbeknownst to most of and doe in perfect secrecy, an extermination campaign against members of the LGQBT+(assorted) community is under way in the Volunteer state and its members are now required to use camouflage to travel inconspicuously across the state.

The basic Tennessee license plate comes with the option of having the words “In God We Trust” or not. I don’t care either way, but the missus being a good Christian lady decided she wanted it, so we got it. (It should actually be “In God We Trust, Everybody Else Keep Your Hands Where I Can See Them” but I guess that would be too much)

The author of this article says it went with the IGWT version out of fear.

Six months ago, in a column about faith pervading Tennessee life and society, I told readers I was not sure what box I was going to check on the “In God We Trust” question.

“I am a preacher’s son who led our company’s interfaith employee group, but I am also wary of sending a government-sponsored message about religion that would marginalize people because of their faith tradition or lack thereof,” I wrote.

I am guessing he rejects the possession of cash money because of “In God We Trust”, right ? (Big fat fucking chance.)

Since the column ran on June 10, however, the Roe v. Wade Supreme Court decision on abortion was overturned, top state and federal elected leaders held a rally to decry what they call “genital mutilation,” the Maury County library director was run out of his job for having an LGBTQ book display, and legislation has been filed to allow the state to intervene in transgender people’s medical decisions and regulate drag shows.

I am not going to address point by point the different loads of manure expressed above, but it does give you a good picture of where Mr. Plazas stands politically.

Moreover, as documented by The Tennessean, the rise of Christian nationalism has permeated state politics, turning terms such as “Tennessee values” into cudgels against people who hold different viewpoints.

Other values are however allowed to drive cudgels, stakes and hairpins if they chose so because they are approved by the Left.

And now we come to the nugget of essence of this verbiage:

When I chose “In God We Trust,” it was an emotional decision made out of self-preservation and personal safety.

As someone who also identifies as LGBTQ and travels across the state regularly where expressions of secularism are not always as common as in urban areas, I made my decision based on fear.

WE NEED CAMOUFLAGE TO FEND OFF THE EVIL REDNECKS! ZOMG! I mean, one moment you are driving I-40 minding your own business and listening to your favorite LGBTQ+ podcast when a caravan of pick-up trucks loaded with fat males wearing overalls only, drinking beer and menacingly waving chains and baseball bats surround you Prius because they noticed you don’t have a “In God We Trust” and therefore you must be a groomer. 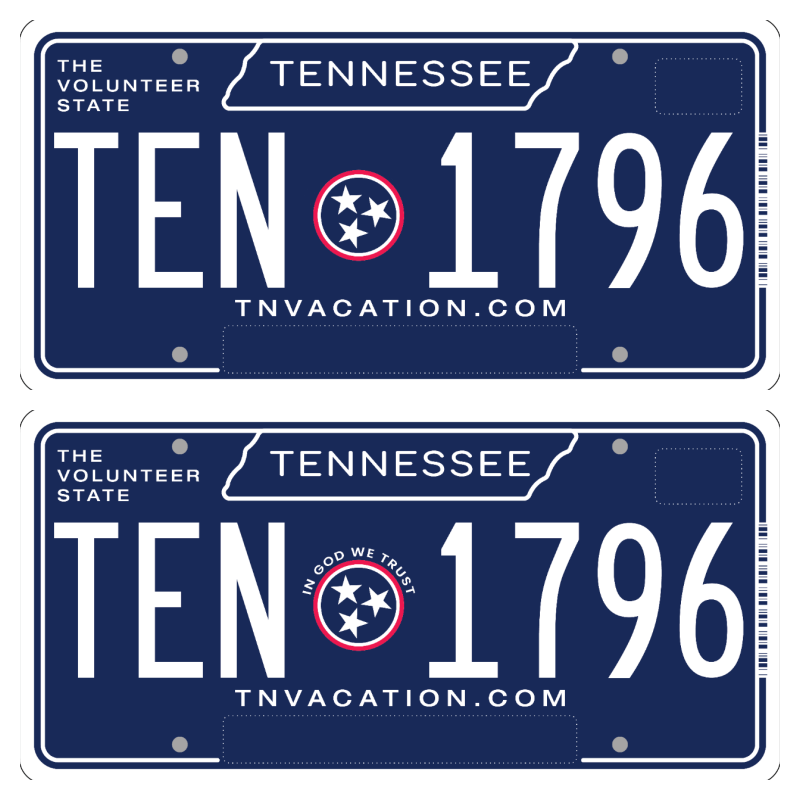 The bottom plate is the “offending” version.  You have to look hard for the IGWT part as you walk by a car in any parking lot, and almost an impossibility while driving. So, all his “fears” are nothing more than a bit of Victim Drama Queen playacting, probably because there was a deadline in his future and needed to turn something it to the birdcage liner printing company.

And I am not saying there are no Gay Hater Assholes in Tennessee, the Good Lord know they are everywhere including in Gay havens like Colorado Springs which he also mentions as an excuse to editorialize from a faux position of higher morality. If you are truly in fear for your safety and you a license plate inscription is the solution to curtail such fears, you are a bigger idiot than the usual. You live in the Great State of Tennessee, patron Saint of all Things Shooting and Constitutional Carry.  Arm yourself and defend your beliefs.

Armed Gays do not get bashed.

4 thoughts on “Choosing a Tennessee License Plate to hide Gayness?”