And article from The Trace:

When Protestors Carry Guns, Does It Impede Others’ Free Speech?

In  late January, thousands of pro-gun activists descended on Richmond, Virginia, to protest a package of gun reform bills advancing through the state General Assembly. Many of them were armed. The specter of a massive open carry demonstration was difficult for anyone to ignore, but the day was also significant because of the people not in attendance outside the state Capitol grounds.

Whomever chose not to attend because of fear or concerns is an idiot who never took 2 minutes to research what has happened in the past when thousands of Gun Owners get together to exercise their First Amendment Rights: Not a thing.

Garrett Epps, a professor of constitutional law at the University of Baltimore, was one of many to surface concerns about the First Amendment rights of the unarmed. In The Atlantic, he declared, “The right to bear arms in political debate is not the power to speak for oneself; it is, at least implicitly, the power to silence others.”

The keyword is “implicit,” why? because they cannot find one single solitary event where violence has erupted form the side of the Gun Owners. So, he need to say that people simply may feel scared (his own bias) and not attend than actually fess up and say there is no evidence of actual violence ever happened.

Is there a First Amendment right to attend a protest free of guns?

The short answer is no, at least not right now.

DING! DING! DING! We have a winner! “We need common sense legislation that will allow our side to ban firearms during demonstration so we can get away with beating the living shit of anybody we oppose.”

Reporter friends who planned to attend the event went in with a sense of dread, a war-zone fatalism at what might happen. Molly Conger, a Virginia-based leftist activist and citizen journalist, told me that she had cautioned other activists to stay far from the capital and avoid counterprotest. She attended, she told me, because she felt an obligation to document the event, rather than to protest it. “I still think it was the right thing to do,” she told me Tuesday, of her decision to warn other activists away. “I would be distraught if I had the power to keep people away and didn’t and they died in a mass shooting.” At the event, she said, “the crowd was so thick I got knocked in the face and chest with rifle barrels.”

Interesting.  At no time she can make the accusation that she was threatened or that anybody was nasty or impolite, so the only thing the reporter could come up with was that it was crowded and allegedly bumped by inanimate objects.

The effects on locals amounted to a sweeping petrification. Due to Monday’s event, Richmond natives closed their businesses downtown—from a 7-11 near the Capitol to a barbershop to the entirety of Virginia Commonwealth University, which suspended all activities for the day, including internships and clinical placements; a university statement made clear that this was in response to the threat, not the federal holiday.

What threat was given by Gun Owners, did you hear about anything? no, right. So where did that bogeyman come from? The answer appears in the first sentence of the next paragraph:

Due to the state of emergency declared by the governor,

THE BOGEYMAN IS COMING! THE BOGEYMAN IS COMING! SAVE YOURSELVES! Again, they make shit up, create a panic and try to cash on the results.
Now, if the threat was so bad, how come there was not a bigger police presence in the area? Don’t take my word, go find videos of the event and you will see that the few cops present were mostly bored and in what appear to be a traffic control duty.

And if that was not enough, after the protest was over, people left peacefully and not a single incident of vandalism happened, not one single solitary accidental discharge happened, nobody shot, not one of the usual predictions that The Gun Controllers swear will happen among gun owners occurred. Why? Two reasons, 1) Gun owners by far are extremely polite and respectful of people and property and 2) By the same token, we will not accept violence against us.  You try to hurt us, we will hurt you right back and with interest so the usual suspect in black figured to do the safe thing and stay home listening to the best speeches of Bernie Sanders in vinyl.

Tens of thousands armed individuals got together and nothing happened, nobody got hurt. Can’t say the same for the other side, right?

Never forget that the people that have a dislike for the Second Amendment, more than likely do not appreciate the rest of the Bill of Rights, including the First Amendment this so-called article alleges to defend. 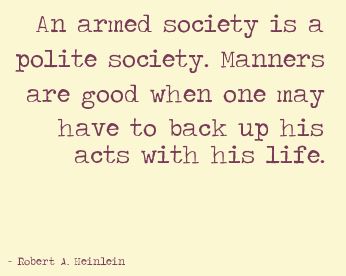 About that New York Brand…