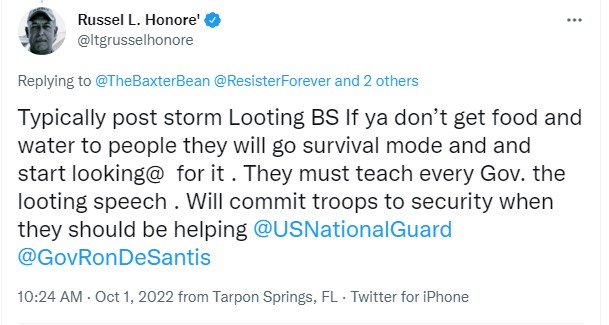 I have to add my two cents about the comment of this individual.

“If ya don’t get food and water to people they will go survival mode and and start looking@ for it .”

Which begs one question: Were these people in a coma since April 1st? One thing Florida does regularly on that date is to remind and hammer on people that hurricane season is coming and to start preparing. You cannot walk into a supermarket or mega store without seeing stacks of pamphlets on hurricane preparedness. They all include different variations of the same list which begin with the amounts of food and water you should keep during hurricane season! And different versions of the same checklist will be seen on TV and heard on the radio and websites (Including this humble blog) would publish them.

I still remember Governor Jeb Bush warning people to prepare for an upcoming hurricane by blunting stating that for at least the first five days, those affected by a hurricane would be on their own.

And I guess Gen’rul Honore was too busy being NOLA’s Warlord that he did not hear about another hurricane that happened while he was strutting for the TV cameras: Hurricane Wilma, a category three event that swept through South Florida a month or so after Katrina. We got nailed bad but we were prepared and came out of it because we were prepared and even the few that were not prepared, got relief faster than their fellow New Orleans idiots because the Rescue Resources were not taxed and overwhelmed by crowds of ignorant idjits who took a chance by doing nothing and lost.

As for looters, we had some, but nothing in the nightmarish behavior of New Orleans. Those who were not caught by cops were either lucky or were sent running away by armed civilians who may have or have not placed a couple of shots by their immediate breathing area.  Police was not taxed either and could respond to other incidents because neighborhoods were being kept safe by its inhabitants.

Florida did not need the National Guard patrolling the streets because we civilians were keeping them safe. Hell, we were probably better armed that them. Armed Florida Civilians made men like Russel Honore unnecessary and irrelevant.

3 thoughts on “Dear Russel Honore : You are an idiot.”