Desperately seeking the destruction of Self-Defense. 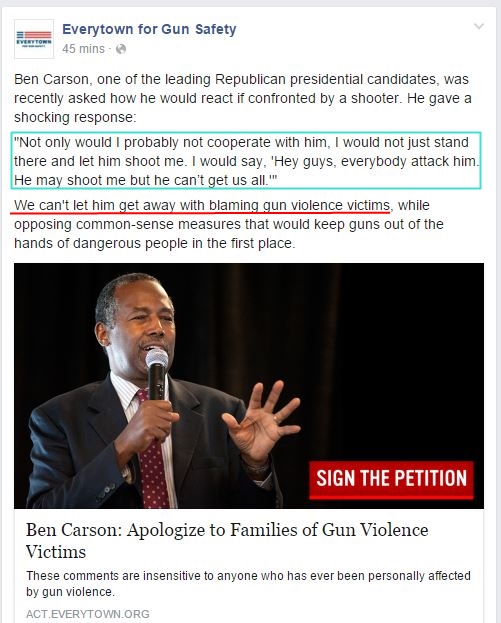 Are you blinking hard? Re-reading the screen cap making sure you read it right? Trying to make sense of whomever was the idiot who wrote that? You are not the only one.

Now, it is not as stupid as it may look like. For most Americans, even many on the Liberal side of politics, the legal concept of Self defense is a sacred right not to be trampled by anybody. But what if that concept is put into shame? How about we slowly erode the principle that your life must be fought for against somebody that intends to take it? The idea is that eventually self-defense would become a dirty expression and soon after a dirty deed that must be tightly controlled by the Government.

The latest movement in our increasingly Beta Male/Female world is the concept of accusing somebody of shaming a particular type by way of your words or actions (Fill-The-Blank) Shaming is actually a misnomer because the person that is being shamed is the alleged violator, in this case Ben Carson for daring to say he would rather fight than be a passive receptacle of bullets. According to Everytown, if you dare not being a victim, you somehow are psychologically trampling on the feelings of all victims in this world. Don’t you know misery loves company? How dare you be different?

If you think I am full of it, allow me to point out that self-defense outside the US is not but a shadow of what we know and have here. The bar to prove self-defense is so high in many other countries that citizens find themselves trapped between the immediate threat of losing life or limb and the long-term threat of going to prison because the government decided that the bastard attacking you had more rights than you and therefore you should go to prison.

Maybe the youngins have not heard about the very illustrative case of Tony Martin in England since it happened 16 years ago (Holy crap, that long?.) One night in August of 1999, Tony Martin, a farmer from Norfolk in Jolly Old England, had his home broke in by a couple of criminals. Mr. Martin shot them with his shotgun as they were climbing the stairs of his residence and even after he warned them he was armed and intended to shoot. He did and killed one and wounded the other. Castle Doctrine, right? Hell the damn concept originated in England! Nope, Mr. Martin was tried and convicted to Life in Prison. And to add insult to injury, the burglar that got wounded sued Tony Martin for 15,000 pounds claiming loss of wages. And it gets better, the government gave the burglar taxpayers money so he could sue Mr. Martin because he was a victim of his shooting in self-defense.

Even the uber cool Brits lost their minds at the unfairness of the verdict. Appeals were introduced and rejected initially but eventually and using mental health issues (and no doubt a great dose of pressure from the outside the legal system) Martin’s sentence was reduced to 7 years and he was released early in 2003 for good behavior.

If the Martin case felt like a bomb among the Brits, in the US Gun Rights community had the impact of a tactical nuke. We were at the tail end of eight years of the Clinton Administration telling people that we should be more like England and that they were more advanced than us and the rednecks of the NRA, that England’s system was not only better but morally superior and we should adopt it fully. Then the Martin Case comes along and shows how legally corrupt and immoral the British Gun Control turned out to be.

Great Britain is done for. Even politicians promised to eliminate such cumbersome high bar for self-defense, they only paid lip service, gave that pig a shot of botox and some falsies. The the common Brit subject remains a victim of both the criminals and Her Majesty’s justice system. And that is the dream of the Gun Control Cabal: If confiscation fails, they will make you pay for daring saving your life.

We cannot allow them to do that.

PS: Found a somewhat recent article about Tony Martin. He is still dealing with all the crap courtesy of Her Majesty’s brand of “justice.”

3 thoughts on “Desperately seeking the destruction of Self-Defense.”