The Right is extremely good at snatching defeat from the jaws of victory by being utterly bone-headed stupid.

There is an old quote of military doctrine I’ve heard attributed to both Napoleon and Sun Tzu: Never interrupt your enemy when they are making a mistake.

There is a segment of the Right that has gotten so addicted to “owning the Libs” that they constantly interrupt their enemy.

This Tweet has trended and been mocked by the Right: 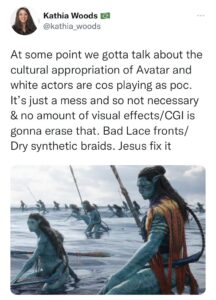 Before you mock this, let’s evaluate the situation.

The Terminator, Aliens, The Abyss, T2: Judgment Day, True Lies are all excellent.

Then after he made Titanic, something in him broke.  He came back in 2009 with Avatar.

That movie was Leftist trash.

The entire basis of the movie is the trope of the Noble Savage.

The war paint, the drum circles, the tribal community, giving thanks for the life of the animal they killed to eat, these aliens were an amalgamation of tropes and stereotypes of indigenous cultures around the world.

They lived in perfect harmony with nature, no disease or hunger, no misery or suffering, no greed or avarice or consumerism, just idyllic life in spiritual oneness with the natural world.

Their Edenesque peace was broken but evil capitalist white men who came to destroy the land for a blue rock.

Then the perfect Noble Savages united with nature, armed with bows and arrows, and successfully defeated the technologically advanced, interplanetary spacefaring humans.

It was dumb as shit and racist as fuck.

But in 2009, the Left overlooked the Noble Savage trope and loved the movie.

If you needed to make it any clearer, Palestinians actually painted themselves blue and dressed up like the Na’vi to protest Israel to convince stupid Western Progressives that they were the noble victims of evil colonialism.

It’s been 13 years since the last Avatar movie, and the Left has shifted.

Now all the Noble Savage tropes are cultural appropriation and the Left wants to cancel Avatar: The Way of Water.

James Cameron gave an interview and said “I always think of [testosterone] as a toxin that you have to slowly work out of your system,”

Let Cameron get eaten by his fellow Leftists for not being Leftist enough.

This is not the time to say “cultural appropriation is not a thing.”

Die on that hill later.  Right now sit back and watch, or better yet, stir the pot.  Encourage the cannibalistic bloodbath.

Do not interrupt your enemy when they forming a circular firing squad.

But there are some people on the Right who feel compelled to jump into this fray on principle.

On principle I won’t.

I’m going support the Canceling of Avatar by the very fucking people it was meant to appeal to.