This one is actually hilarious. They did this for every state of the Union, but Florida’s is special: 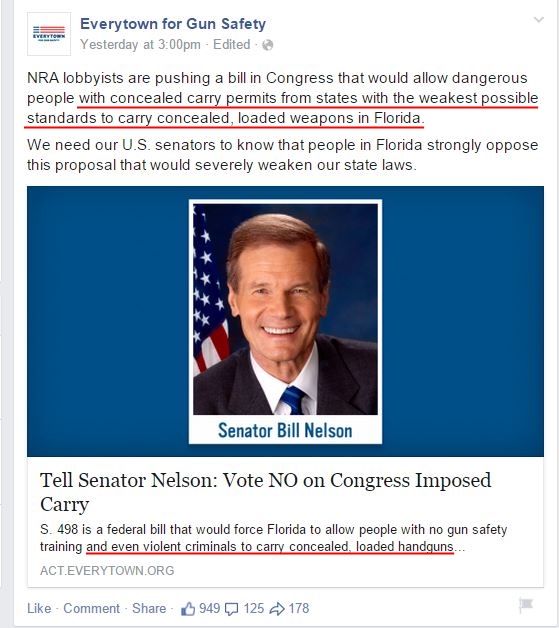 First, Florida has always been used by Gun Control groups as example of BAD CWP requirements. Floridians are the bogeyman of the good-standing, God-fearing people of NY that worry we Crackers and Imported Poeples from south of Key West would engage in Scarface-Type shoot outs in the middle of Times Square.

But probably thanks to an underpaid/overworked, who by the way made a glaring mistake stating that violent criminals would be allowed to carry under Federal Reciprocity Bill (and had to change it later, but the published damage was done) and a cookie-cutter mentality we have the impression that Florida is now the target of Evil CWP carriers from other states, something that never has happened before…except for those states which already are into reciprocity agreements with us, 33 so far.

Also notice that Senator Marco Rubio is missing, wait, you didn’t think that Florida only has one senator, right? Bill Nelson is a sure vote against Federal Reciprocity. He loves any Gun Control bill you can put in front of him by sheer reflex. So what we have here is the standard Everytown/Moms Demand tactic to later say” “Senator Nelson heard us and voted against Congress Imposed Carry. We have the power, yay!”

Gardening Astroturf is not easy.

3 thoughts on “Everytown against Federal Reciprocity: The Florida Fun.”