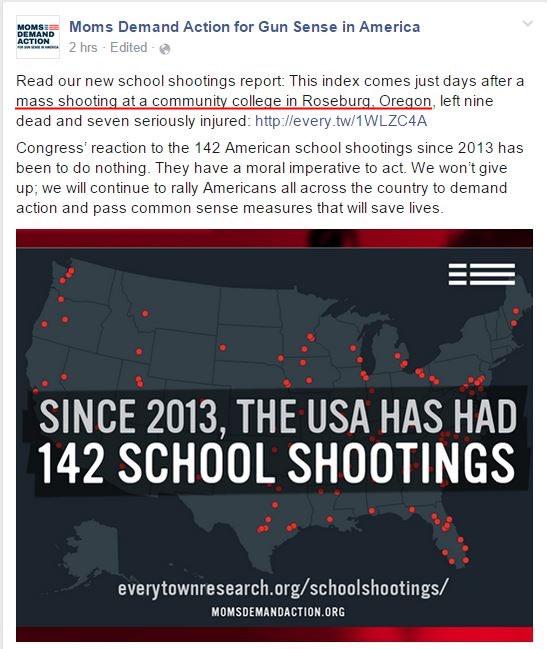 In case you haven’t noticed, both Everytown and Moms Demand have quite a flexible definition for School Shooting. For immense majority of people, a School Shooting is an event where somebody, aligned or not with a school goes into a shooting spree inside a school facility usually resulting in multiple casualties like Columbine or indeed Roseburg.  Not for Everytown/Moms Demand. Although they only come up and scream the loudest when a real School Shooting happens, they came up with this cute interactive map showing all kinds of events that they decided to cover under what they call school shootings…even if the event did not happen near a school.

The map shows 11 incidents in the State of Florida, so I decided to check them out.
Bethune-Cookman University: An unknown assailant shot and injured three male students in a parking lot on campus. Law enforcement did not apprehend the assailant.
(Incident actually happened off campus. House Party where a gang member was kicked out. There were four victims, two of them students.)

Indian River State College: A 19-year-old man shot and injured a 22-year-old student on campus before exchanging gunfire with police. The shooter was eventually apprehended while still on the campus.
(Incident began off-campus with a Drive-By shooting. Police chased the suspect to the parking lot of the college and a shootout ensued. One student was wounded… by the police. She is suing.)

Everglades City School: A 56-year-old man shot and injured Clay Daniels Jr., 30, in the hand outside the back of the school. When law enforcement arrived, Daniels Jr. stated that he and the shooter had gotten into an argument that led to gunfire. Law enforcement located the assailant and charged him with aggravated battery and discharging a firearm on school property.
(The event actually began, once more, outside the campus and ended up in the back forty. I found a copy of the original police report.)

Alexander W. Dreyfoos School of the Arts: A 53-year-old school custodian fatally shot two other school custodians inside the school’s maintenance room. After the shooting the assailant fled to an unidentified location outside of the U.S. It is unclear if the shooter has been apprehended or extradited.
(Straight up workplace violence. The shooter was Javier Burgos who had a history of complaints against him at work by the victims who had asked school officials to get him help for his anger management problems.)

Greenwood Lakes Middle School: A 14-year-old boy fatally shot himself in a school bathroom with his father’s .40-caliber Smith and Wesson pistol. The boy’s father later told investigators that he unintentionally left the key to the gun box at home, which allowed his son access to the firearm.
(Lamar Hawkins committed suicide. According to the investigators, he and his sister were routinely bullied by classmates. Nice of Moms to use a suicide to pad the school shooting numbers.)

West Orange High School: Five unidentified people were arrested in the shooting death of a 15-year-old boy on campus after a football game. There was no indication whether the boy knew the people who shot him.
(For the date given for this incident by Everytown/Moms of 12/4/13, there was indeed a shooting after classes ended, no football game, and the kids were boarding the buses to go home. The shooter was captured and the victim survived.)

University of Central Florida: A 30-year-old man threatened to shoot his roommate in the residence they shared on campus, and then fatally shot himself. No one else was injured in the incident.
(James Oliver Seevakumaran was not enrolled as a student even when he was living on campus. He did have a manifesto, a .22LR rifle and molotov cocktails which he planned to use against the resident of the dorm. This case is the closest to a traditional School Shooting, but it did not happen since the asshole did a world a favor and killed himself.)

Vanguard High School: An unknown assailant shot and injured an unidentified 14-year-old girl in the parking lot of the school. Law enforcement did not apprehend an assailant.
(It appears to be a drive-by done by a teen from another school. The event happened at night when the school was closed and only a basketball game was going on with police present. A 15-year-old suspect was arrested.)

University of Florida: A 25-year-old man fired a handgun in the parking lot of a dorm during an argument. The shooter and his girlfriend were walking back from a bar to the parking lot when a fight broke out. The shooter fired a shot into the ground, but did not physically injure anyone. The shooter was charged with discharging a firearm on school property and discharging a firearm while intoxicated, among other charges. The girlfriend of the shooter was charged with carrying a concealed weapon.
(Self explanatory although they do not mentioned it happened around 3 AM. Not quite a Columbine Massacre, wouldn’t you say?)

Florida State University: A 31-year-old man shot and injured three people in the school library: students Ronny Ahmed, 21, and Elijah Velez,18, and library employee Nathan Scott, 30. When law enforcement arrived, they ordered the shooter to drop his weapon. When the assailant refused, officers fatally shot him.
(Finally an event that corresponds with the accepted definition of School Shooting. I linked Greg Ellifritz analysis of the event on the blog. Check it out.)

University of Miami: A 25-year-old woman attempted to shoot her ex-husband Todd Landess in his office on campus. During an altercation in the office, they struggled for the gun and the weapon discharged, without resulting in any injuries. Law enforcement arrested the assailant and charged her with attempted murder, aggravated battery, and discharging a firearm on school property.
(Workplace Violence/ Domestic Incident. Actually it was 35-year-old Yasmien Love who attempted to shoot Todd Landess at the University of Miami School of Communication building. Landess was injured by strike with object and biting. And I quote from the Miami Herald: “Love identifies as female, but Coral Gables police identified her as a male on the affidavit. Police spokeswoman Kelly Denham said Saturday that Love’s driver’s license lists her gender as male, which is what the police based their report on.“It’s a very delicate situation,” she said.”
So would I.)

So, out of the 11 incidents in Florida, only one can be considered a School Shooting the way everybody but a few intellectually corrupt Gun Control Activists would understand them.
If their cause is so righteous, why do Gun Control Activists need to lie and move goalposts to promote their message?
You guys should be getting tired of me repeating the same question, sorry! It must be done.