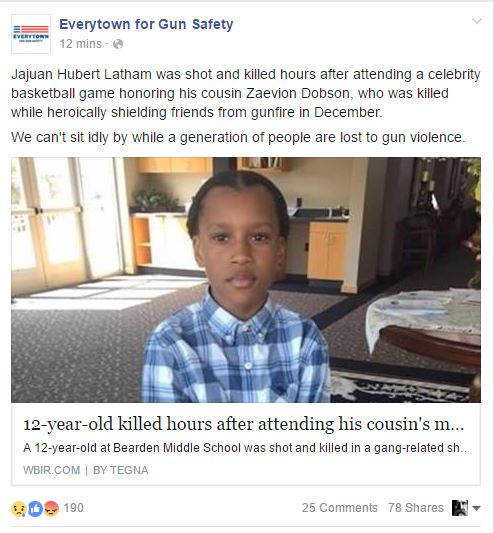 On Sunday night, an emotional gathering to honor the life of 12 year old Jajuan Latham. The community came together at Danny Mayfield park, where police say Latham was shot and killed Saturday night in a gang-related shooting.
A 12-year-old at Bearden Middle School was shot and killed in a gang-related shooting in Knoxville Saturday night, according to police. Jajuan Hubert Latham was struck in the head by a gunshot while sitting in the back of his father’s SUV at Danny Mayfield park just before 10 p.m.The father was not injured in the shooting.
During a press conference Sunday, Knoxville Police Chief David Rausch condemned the recent gang-related violence.

“The violence has got to stop, this can’t go on. We do not need to bury anymore children,” Rausch said. “It’s my gang is better than your gang. That makes no sense to me.They’re cowards. A coward shoots blindly at a crowd.”

In the defunct TV show House, they would have patients coming in every week with different and weird symptoms of unknown maladies. Whether the person could only turn left and speak in Sanskrit or have violent diarrhea while sporting  checkered splotches and growing hair out of the elbows, Dr. Gregory House would utter the same initial command : “Check for lupus.” And I would yell at the screen “It is never effing lupus, you moron!” much to my wife’s irritation while making sure nothing too hard was at my reach. (She liked the show, I had to watch it.)

Gun Control groups like Everytown/Moms Demand seem to have copied the same script with the exception that once the initial diagnosis was found wrong, they stick with it instead of abusing the underlings and finding what was really is needed to cure the patient. In the article, gangs are mentioned several times, but it will be a cold day in this alleged globally warmed sphere of planet before Gun Control drops their script and help address the issue of gangs or mental health.

In the meantime, the bodies keep piling up and they get to fund-raise from the top of the cadaverous monument.

Blood washes off, I guess.