Florida: Ballot Initiative against “Assault Weapons” fails. Hogg & Co. could not get near enough signatures. 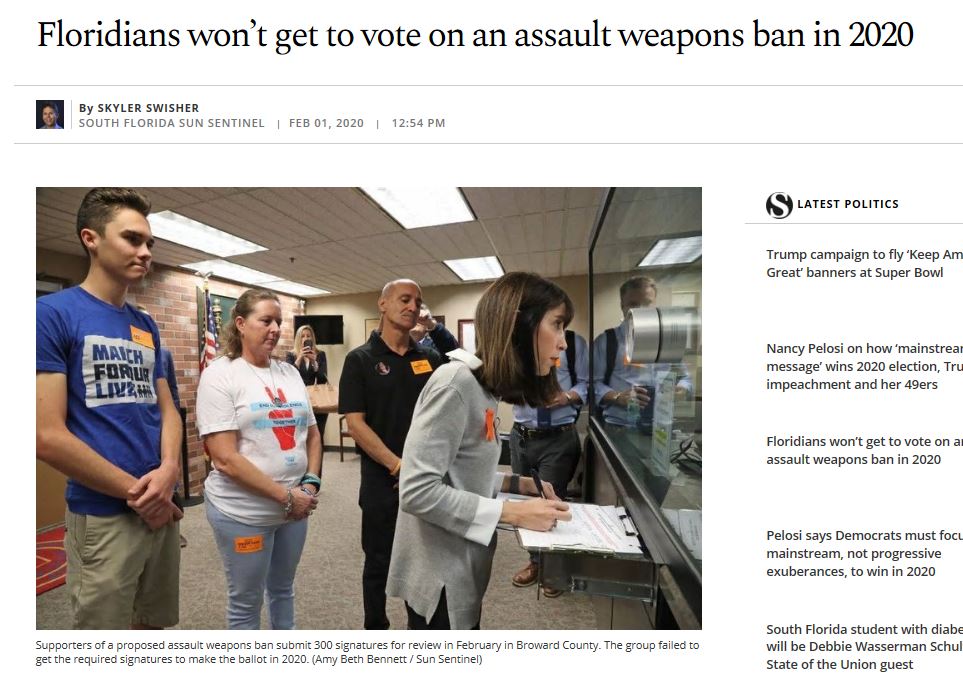 Florida voters won’t get to decide this year whether assault weapons should be banned.
A proposed ban didn’t get the 766,200 signatures needed to be placed on the ballot.
Supporters say they are now focusing on getting the question before voters in 2022. The group pushing the petition — Ban Assault Weapons Now — collected 145,000 verified signatures this past year. The deadline to meet the signature requirement for this year’s election was Feb. 1.

Finally a good piece of news for the year. Of course, we still have all the bills in the Legislature that we need to make sure they don’t even come out of committee .

Do notice the language used by the author as if somehow evil and dark forces sabotaged the signature collection process rather that being simply they did not get enough people to believe in what they were trying to sell.

“Despite the best efforts of the NRA and politicians in Tallahassee to place obstacles in our path, we will continue our fight to save lives by working hard to ensure voters have the final say over their safety in 2022,” Gail Schwartz, Ban Assault Weapons Now’s chairwoman, said in a prepared statement.

There was issues brought forward about the movement, but at the end of the day it was simply one thing: Verified Signatures. They needed 766,200 signatures and only collected 145,000 or 19% of the needed target. I like to look at is as an 80% fail (I like round numbers.)

But disabuse yourself of the notion that they are going to sit down and take it in the chin. They will now switch their energies to the Legislature and push for the ban bill they have running.

3 thoughts on “Florida: Ballot Initiative against “Assault Weapons” fails. Hogg & Co. could not get near enough signatures.”