This is an announcement from Virginia’s Governor’s Office.

Governor’s decision based on credible threats of violent extremism

RICHMOND—Governor Ralph Northam today declared a state of emergency in advance of expected demonstrations on Capitol Square on Monday, January 20, 2020. Law enforcement intelligence analysts have identified credible threats of violence surrounding the event, along with white nationalist rhetoric and plans by out-of-state militia groups to attend.

The Governor’s declaration prohibits all weapons, including firearms, from Capitol grounds, and will provide joint law enforcement and public safety agencies the resources they need to keep demonstrators, policymakers, and all Virginians safe.

Internet Chest Thumpers aside, what I’ve seen of the gun sanctuary townhalls and marches has been overwhelmingly peaceful and polite.

If it hadn’t, we’d be flooded with stories about the crazy gun nuts scaring local politicians in between impeachment updates on CNN.

Yes, the Governor’s action is probably justified on some scale based on the Unite the Right rally in Charlottesville back in 2017, and is bracing for the worst.

But there is another factor at play because history repeats itself.

In 1996, Australia was mulling a gun ban.  There was a political rally held by Australian sportsmen and hunters.  The Prime Minister at the time was John Howard, who addressed the rally of law-abiding licensed, Australian gun owners visibly wearing body armor under his clothes. 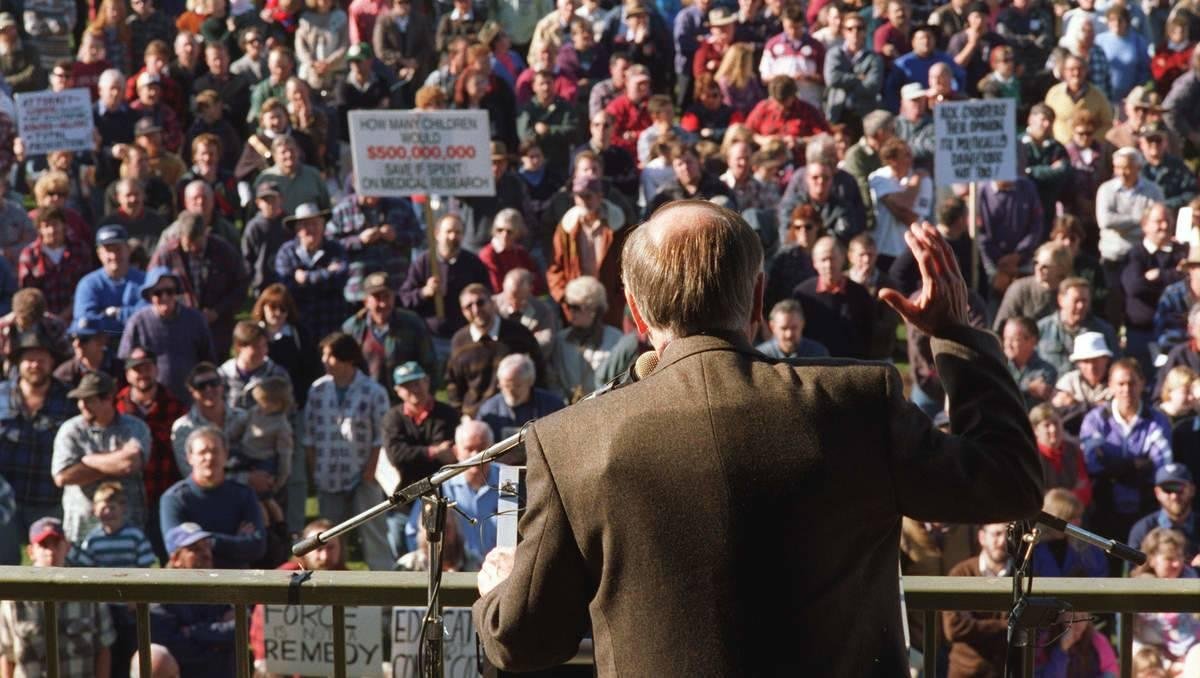 This upset the crowd.  The PM was implying that these law-abiding gun owners would try and shoot him at the rally, which was offensive as hell.

The media reported that the rally was “hostile” and portrayed Howard as fully justified in needing to wear armor.  This turned the public opinion further against the Australian gun-owning community and the Australian parliament passed its gun ban and buyback with overwhelming support.

I am absolutely convinced that Northam is engaged in the same sort of act.  He is declaring this emergency the way he has to set the narrative that ALL GUN RIGHTS ACTIVISTS ARE JUST AS DANGEROUS AS THE HANDFULL OF TIKI-TORCH ASSHOLES.

That is the story the press will run with. You know this to be absolutely true.

CNN, MSNBC, etc. will not separate the guy with the SS runes tattooed on his neck from law-abiding NRA members and they will do their best to make sure every person there is assumed to be the worst that America has to offer.

I fully support the right of the people to peaceably assemble.  I think showing up at the capital is important, do demonstrate in real-time that gun control is not going to be welcomed across most of Virginia.

The worst thing that can happen to decent, law-abiding, gun owners or Conservatives, etc. is to be silenced and intimidated out of the public square with the threat of character assassination.

So here is my advice.

Leave your Gadsden flags, MOLON LABE, Spartan helmet, and all other shit like that at home.  Make your signs polite, presentable, and nonthreatening.

Wear a Polo shirt and a pair of khakis.  Look like you are going to work on a casual Friday.

I have documented time and time again on this blog about how the excesses of a group scare the normals and turn public opinion against a moment instead of towards it.

Remember that the public opinion towards gay rights went up with Will and Grace and down with Pride parades of pre-pubescent drag queens and men dancing on the street in nothing but roller skates and leather cock-socks.

Wearing a III% shirt with a banner saying “come and take it” is the gun-rights version of a satanic drag queen showing his asshole to children.

You can read the rules in the EO for yourselves.

Some important things to note:

[N]o weapons, including firearms, may be carried or possessed on any land, real property, or improvements owned by the Commonwealth of Virginia within the area bounded by Broad Street, Ninth Street, Bank Street and Governor Street in the City of Richmond, Virginia, as well as any Commonwealth-owned parking lots for Virginia’s Department of Transportation, the Madison Building, the Monroe Building, the Patrick Henry Building, Washington Building, the Jefferson Building, and the Oliver Hill Building.

Leave your shit at home.  You are showing your dislike for these gun control bills by your presence in numbers, not with guns.

“Weapon” means any weapon as defined in paragraphs (ii) through (v) of
subsection A of § 18.2-308 of the Code and any stun weapon, as defined under § 18.2-308.1 of the Code, with the exception of a pocket knife
having a folding metal blade of less than three inches. “Weapons” also
includes, but is not limited to, sticks, torches, poles, bats, shields, helmets, caustic substances (i.e., pepper spray), hazardous materials, scissors, razor blades, needles, toy guns, toy weapons, fireworks, glass bottles, laser pointers, aerosol containers, baseballs, softballs, UAVs/Drones, or any item that can inflict bodily harm that is visible, other than firearms.

A knife is an important part of EDC.  I have one on me all the time.  This is not the place for your tactical BFF (big fucking folder).  Your little Swiss Army Knife will do just fine.

If it looks like a weapon, it will be treated as such.

Conduct yourself with the best behavior.  Be unimpeachable in your conduct.  The Left and the media are looking for a reason to destroy you, do not give them anything.