I absolutely hate what social media has done to our society

So I go online to look for blog fodder.

One of the things that is trending is West End Caleb.

In a nutshell, this dude in New York is on a hookup and dating app.  He’s hooking up with these girls who all give it up on the first or second date. Then as soon as he scores he disappears.

So these girls are creating and longer and longer thread of TikTok videos of their experiences with this piece of shit to the point where it’s trending and gone viral.

So these sluts are doxxing this piece of shit for doing exactly what this app was created to do, i.e., pair off people with poor morals for meaningless sexual encounters.

Fundamentally, I shouldn’t care about this.

I’ll let the late great Norm McDonald sum up my deepest and most sincere feelings on this matter: 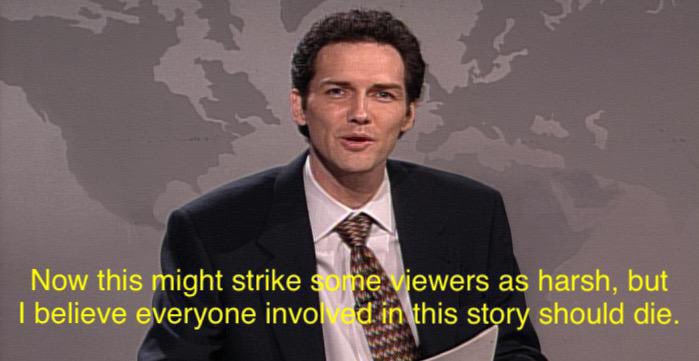 But I’ll tell you why this upsets me.

Because everything goes on social media nowadays.

I open my browser and my news feed contains stories from The Daily Dot or some other pop culture site about a video that has gone viral over some bullshit minutia.

Some waitress didn’t get a tip from a rude couple or someone got into a minor argument over a last donut in the case at the grocery store (both are real examples) and instead of it being settled privately, it’s gone viral.

The alleged victim has a TikTok video with hundreds of thousands of views and a Go Fund Me with a $10,000 goal because she got stiffed on a $20 tip.  The alleged perpetrators are being doxxed and destroyed without the opportunity to defend themselves.

I’m old enough to remember when shit like this was settled in person.

I was a waiter once.  You get stiffed and you go back into the kitchen and call that customer a dick.

You get into an argument at the Kroger and you end it with “fuck you, fuck your mother, and fuck everyone who has fucked your mother, which is most of the fucking state.”

Today, it feels like one of those westerns where the gunslinger comes to town and pushes everyone around because he’s the quickest draw in territory.

Except in this case it’s the TikToker or Twitter user with thousands or millions of followers who can get their narrative out faster and to more people to murder your reputation online who is the gunslinger in the black coat.

This is the greatest evil of social media.

To borrow the words of the Bolshevik revolutionary Pasha: “The personal life is dead in America. Social media has killed it.”