I did not know Dementia was contagious

Not a joke. This is an actual press release from the DOJ: 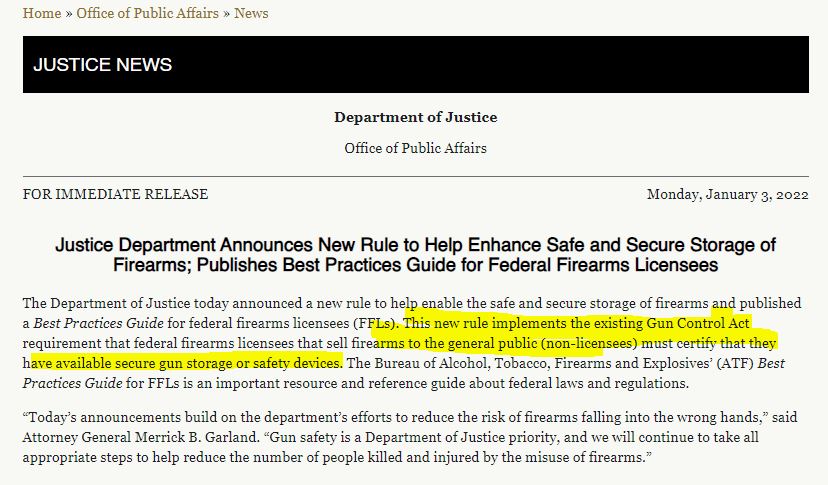 If you are asking yourself, “Wait a minute, Don’t guns already come with locks and have a for a while now?” Well, yes.

The DOJ published their press release announcing the new rule for the New Year, along with a Best Practices Guide for federal firearms licensees (FFLs). The rule says it codifies a Gun Control Act provision that requires all firearm retailers to certify that they do, in fact, offer some sort of secure storage option for sale at the same location from which firearms are sold. That includes a safe, gun safe, gun case, lock box or other device that is designed to be or can be used to store a firearm and that is designed to be unlocked only by means of a key, a combination or other similar means.

NSSF notes, however, that firearm retailers have already been doing this. Firearm retailers have had to certify to the Bureau of Alcohol, Tobacco, Firearms and Explosives (ATF) when they apply or reapply for their federal firearm license that they make secure storage devices available for sale. This rule handed down by Attorney General Garland only implements what’s already being done. This is nothing new or earth shattering, despite what the Biden administration would have you think.
…

Beyond all that, there’s already a law that requires what firearm retailers have been doing. The bipartisan Protection of Lawful Commerce in Arms Act (PLCAA), that President Joe Biden wants so desperately to scrap, includes a provision called the “Child Safety Lock Act of 2005.” That portion of the law requires firearm retailers to provide a safety locking device with each handgun they transfer.

For over 2 decades, the gun lock has been offered with firearms, but somehow this escaped the best and bright minds of the Biden DOJ and in an effort to look butch in Gun Control to its core, they came up with this regulation.

Make you feel good that we have “experts” in the field proudly coming up with solutions that have already been up and running. I am sure next they will mandate showers and/or bathtubs in new home so people can properly wash themselves.

6 thoughts on “I did not know Dementia was contagious”