I wonder Antifa training is going this week

This week, several far Left-Wing groups, some aligned with Antifa, are engaged in “border resistance” training. 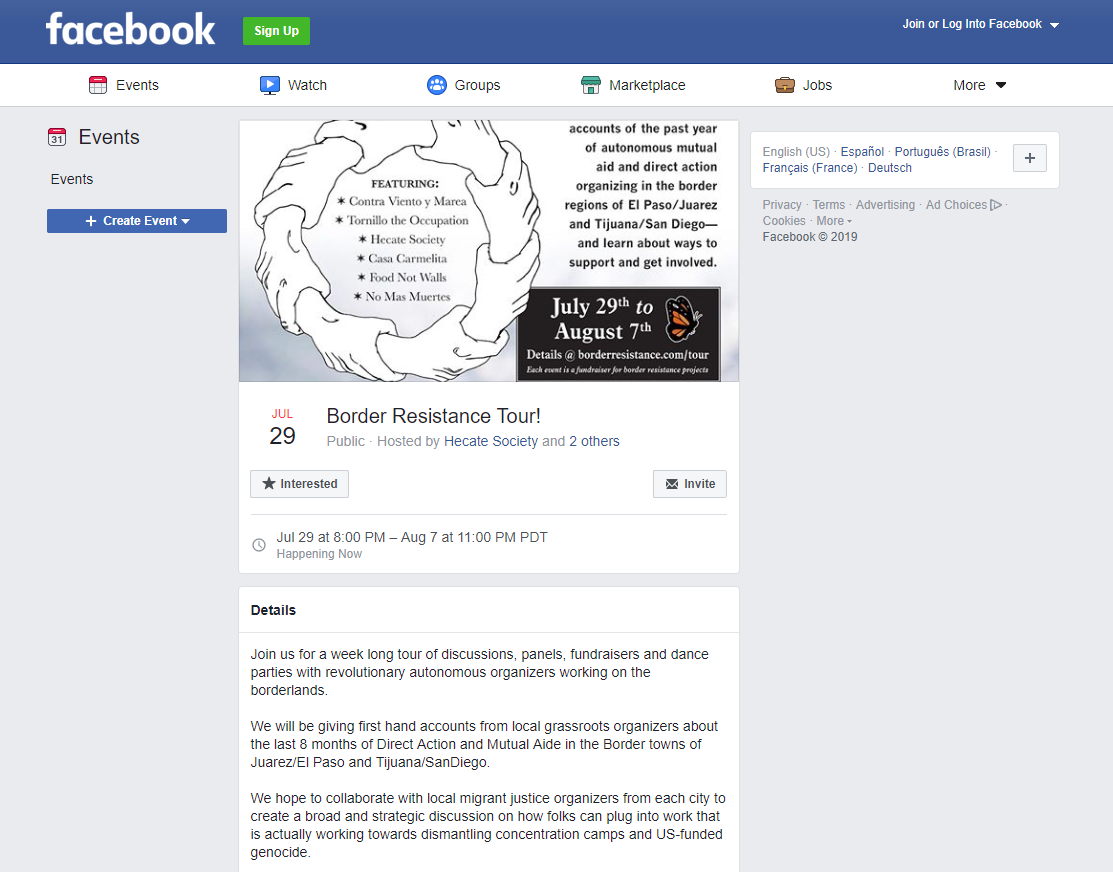 Join us for a week long tour of discussions, panels, fundraisers and dance parties with revolutionary autonomous organizers working on the borderlands.

We will be giving first hand accounts from local grassroots organizers about the last 8 months of Direct Action and Mutual Aide in the Border towns of Juarez/El Paso and Tijuana/SanDiego.

We hope to collaborate with local migrant justice organizers from each city to create a broad and strategic discussion on how folks can plug into work that is actually working towards dismantling concentration camps and US-funded genocide.

AND we will be talking about and inviting you to our upcoming Border Resistance Convergence happening in El Paso Sept 1-10th. Borderresistance.com

This is the flyer from Borderresistance:

That is solid Socialist/Antifa imagery.

It’s Going Down “ is a digital community center for anarchist, anti-fascist, autonomous anti-capitalist and anti-colonial movements.”

They are promoting a Call To Action: Border Resistance Tour and Convergence.

Local and national organizers are working together to build 10 days of trainings and direct actions for the Border Resistance Convergence in El Paso, TX – September 1-10th. We are calling on affinity groups everywhere to come together and help us address US-funded genocide and local concentration camps.

When you come to this convergence you will be in Tigua, Raramuri, Piro, Suma and Manso territory. This convergence is being run by Indigenous & QTPOC (Queer, trans, people of color) leadership and anyone who passively or aggressively disrespects that will be asked to leave.

They are already eating each other in the announcements.

Housing: There are two locations that can house around 20 people each for the time span of the convergence. There are also local organizers who will be opening their houses. These spaces will be used to host QTPOC folks that are traveling to El Paso. We are very much relying on white comrades to donate money and throw down on renting temporary spaces for our more vulnerable friends as camping can affect us all in different ways. There is very nice camping within the “city limits” of El Paso.

Travel Funds: There are travel funds available but limited for POC, trainers and collectives offering specific skills. Please indicate on the registration form if this is you.

They even engage in racial and sexual grievance grifting from each other.  You can’t be a white person concerned about the conditions on the border if you are not footing the bill for your fellow queer, trans, people of color protesters to stay in an AirBNB while you sleep in the mud outside.

They are training right now, or supposedly are.  I can’t find any local news coverage of this.

Then in September they are going to be kicking off their “Direct Action” against ICE in border facilities in Texas.

I can’t wait to cover that.  Texas is not like Portland.  The police are not going to stand idly by while Antifa creates a open-air-sewer tent city around an ICE facility that looks like the worst parts of Bangladesh.

This blog has covered the firebombing of one ICE facility and how that jackass was turned into a martyr.  So it makes me wonder what is being taught at this resistance training.

We’ll find out in a month.

2 thoughts on “I wonder Antifa training is going this week”