Idealism must be tempered with a good dose of common sense.

The two Americans killed in an ISIS-claimed attack in Tajikistan over the weekend were a couple from Washington D.C. who left their lives in the nation’s capital to see the world together by bicycle. According to Lauren Geoghegan’s parents, the year-long cycle adventure was typical of their daughter’s “openness to new people and places, and her quest for a better understanding of the world.”

D.C. couple killed in ISIS-claimed attack were cycling around world

Although fastly approaching the “Get Off My Lawn” age bracket and raised within the boundaries of “The glass is half full/empty/poisoned” school of life, I have no problem with people with lofty goals and idealism. But no matter what crusade you want to attempt, never forget that there are immutable hardcore limits in this world and in many cases, deadly.  You cannot jump off a cliff, wave your arms and expect a soft landing or swim among sharks forever and expect not getting a dental tattoo from them.

Evil exists. Evil people exist. They have existed since Sapiens decided to go upright and probably will exist all the way to the extinction of our line. Going out in the world with the idea that Evil is some sort of social construct is a dangerous thing to do. This is a quote from their blog simplycycling.org: 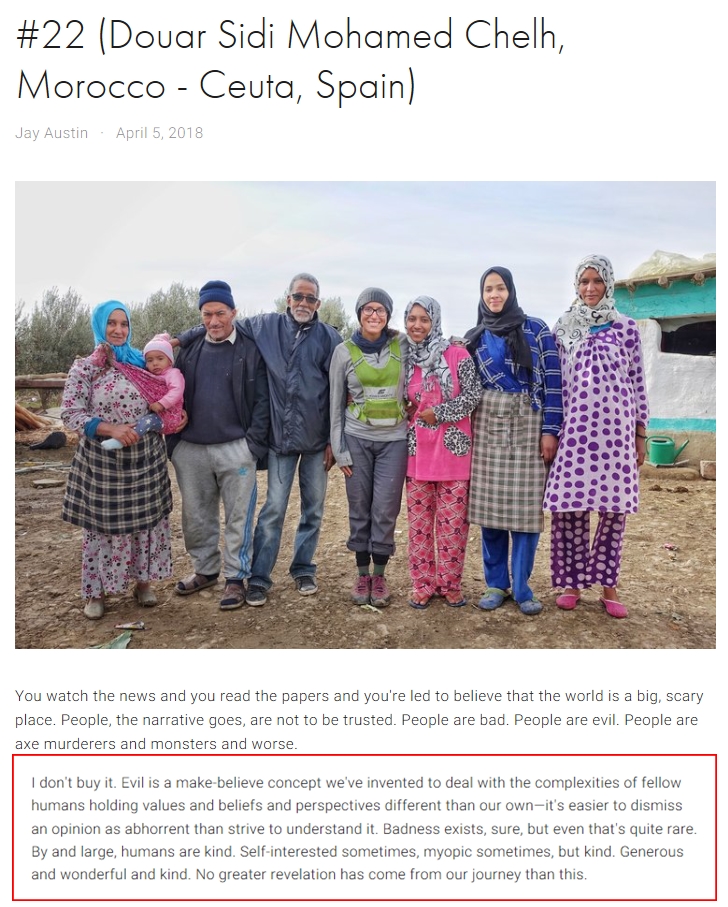 I don’t buy it. Evil is a make-believe concept we’ve invented to deal with the complexities of fellow humans holding values and beliefs and perspectives different than our own—it’s easier to dismiss an opinion as abhorrent than strive to understand it. Badness exists, sure, but even that’s quite rare. By and large, humans are kind. Self-interested sometimes, myopic sometimes, but kind. Generous and wonderful and kind. No greater revelation has come from our journey than this.

I could make long snarky remarks, but truthfully they would not contribute a thing compared with the harsh truth that this your idealistic couple ignored basic facts of life and paid the ultimate price.

3 thoughts on “Idealism must be tempered with a good dose of common sense.”