I know it seems like the New York Times as really put a bee in my bonnet recently, and it has.  I’ll tell you exactly why.

Almost daily there is another unverified anecdote about how Trump’s rhetoric has resulted in verbal attacks or violence directed at minorities or immigrants.  That because Trump said something, his supporters have been emboldened lash out.

I have a black friend in New Orleans who says since Trump the outright racist comments she gets day in day out are relentless. She says this is a direct result of Trump. It is disgusting and infuriating. It is the worst of America.

Well… if that’s the case, what about all of the racist, anti-white, social justice bullshit that is not just said by those on the Left, but fully defended and endorsed by major media outlets and celebs.  Could that cause those on the Left be emboldened?

A passenger on an MTA bus in Brooklyn punched another rider while shouting an anti-white statement in an unprovoked attack, police said.

The suspect walked up to the rider on the B25 bus and said, “I hate all you white motherf—–s,” as the bus drove down Fulton Street in downtown Brooklyn on Monday morning, cops said.

He then slugged the 29-year-old man in the face, according to police. The punch caused the victim’s face to bruise and swell.

A random act of anti-white violence in New York City.

On June 30, a man called Barnstable police to report a hit-and-run crash. He told responding officers he had been driving south on Bearses Way in Hyannis, and was stopped for a red light at the intersection of Route 28 when the driver of the car behind him began honking the horn, according to a police report.

The man continued driving onto Bassett Lane and the car followed, with the driver still honking, the man told police, according to the report. When he stopped again for a red light at the intersection with North Street, the driver also began yelling, the man said.

“She said, ‘You voted for Trump?’” the man wrote in a statement. “I said yes. She called me a racist and several other names.”

A random act of anti-Trump supporter violence in Massachusetts.

63-year-old Carlos Bayon was arrested and charged by criminal complaint with interstate communication of a threat.

Prosecutors say the Louisiana office of a United States Congressman received a threatening voicemail on June 30. It stated:

Hey listen, this message is for you and the people that sent you there. You are taking ours, we are taking yours. Anytime, anywhere. We know where they are. We are not going to feed them sandwiches, we are going to feed them lead. Make no mistake you will pay. Ojo por ojo, diente por diente (Spanish for “an eye for an eye, a tooth for a tooth). That is our law and we are the majority. Have a good day.”

Threats made by a man in upstate New York.

Of all of them, this one is the scariest.

The suit’s 20 plaintiffs claim in a lawsuit that police knowingly ordered them to leave through an exit where protesters were waiting, despite the existence of a safer route and other exits, the San Francisco Chronicle reported last week.

So the police in a very Blue part of the country put Trump supporters safety at risk and made them run a gauntlet of violent Liberals.

You can say “but these Lefty types are a bunch of pansy ass snowflakes” and yeah, that may be the case.  But that doesn’t mean they can’t hurt anybody.

No, I don’t think that a race war will break out that looks like the American Civil War in any meaningful way.

What I worry about is something that parallels The Troubles in Northern Ireland or the Pogroms of Germany, perhaps a more aggressive version of what FALN or the Weather Underground did.

A bombing or ambush of a bunch of Conservatives or a group of right leaning white people in hit an run type attacks.  A bunch of black bloc descending on a meeting of College Republicans with mele weapons would do a lot of harm and all the police need to do is take their time showing up and not doing much when they do.

It’s racial terrorism that I worry about.

The Left models itself as #TheResistance and loves the Palestinians.  What happens when just a small fraction of them decide to take up Palestinian tactics?

When The New York Times puts a racist on their editorial staff and some group of white Conservatives ends up getting hurt or killed, will the coverage be sympathetic to the attackers and inspire more events.

When a member of the media calls for the mass extermination of Trump supporters, how do you think they would cover the bombing of a Trump 2020 rally by a far Leftist? 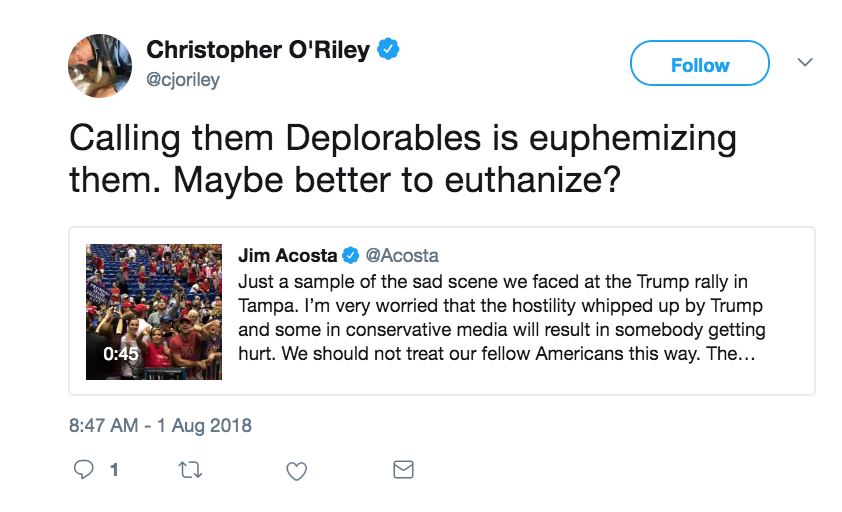 I don’t want to live in an America that is like Belfast during the Troubles or Jerusalem during the Intifada, where I am worried that if I leave my home, I might be a casualty in some random act of Leftist violence or the far right wing retaliatory violence that would likely ensue.

A race war in America won’t be state militias invading each other.  It will be small groups engaged in terrorists acts targeting civilians.

The more the media and celebrities push social justice racism, the more likely some radical will be inclined to set something off to be praised as a hero by the NYT or HuffPo.