Inflation is the Big Corporations Fault

You can tell that the recession of 2022 is going to be bad. The media is rolling out the narrative that inflation is caused by anything but the Democrats policies.

A couple of years ago there was a massive wildfire. The west coast of the US was burning. But when you looked at it from space there was a strange thing happening. The fires stopped at the US/Canadian border. Why?

While in the US the econazi’s screamed over anything humans did that changed a single bit of nature, the Canadian’s were practicing better (good?) forest management. The environmentalist in the US had initiated a number of policies that caused the forests of west coast to be turned into one great big tender box.

Of course the media was screaming the leftest talking point “Climate change is causing wildfires!”

In the same way Biden’s economic policies are causing inflation. The media claims it is not because of policy but there are things that make you go “Hmmmm…”

The left counters by claiming corporate greed. Corporations are pulling in huge profits in 2022, this proves they are greedy.

The first thing to understand is that companies pulling in profits doesn’t mean that there is suddenly a huge pile of money that the board of directors gets to play in. No, it means that the corporation is going to be paying out more dividends. 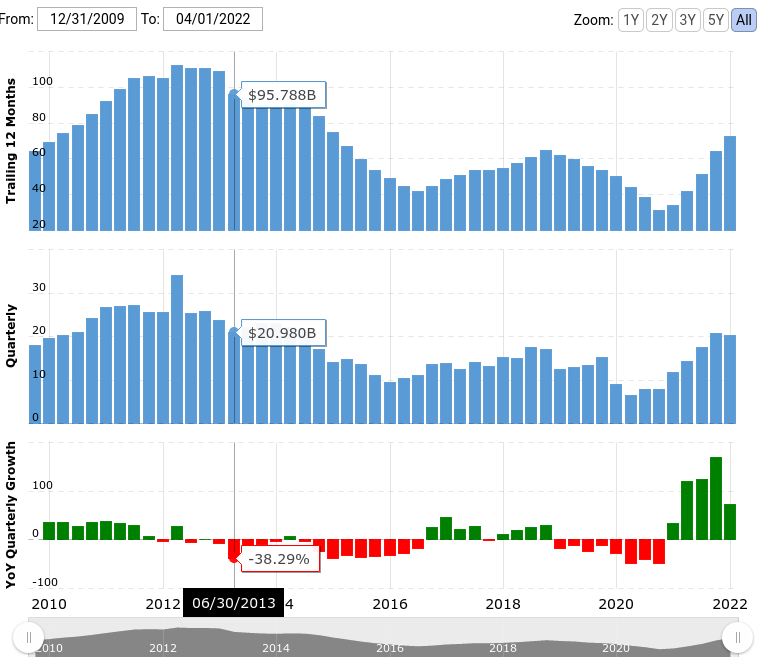 The short answer is there was a policy change.

The problem with judging “greed” by profits is that profits doesn’t tell you anything about the state of a business. If the gross income on a widget is $100 and the net is $0.10 nobody thinks that’s an outrageous profit. Take that same widget and sell 1,000,000 of them per month and you have a net income of $100,000.

Making $1.2Million in “profits” per year sounds a whole lot better than 10 cents per widget.

People have a difficult time conceptualizing large numbers. A Small Problem With Big Numbers is a brief description of the problems with understanding, getting a feel for, large numbers.

I spent time working for a super computer company. We dealt with very very small numbers in measuring time. Times that were so short that the lengths of wires were all carefully measured because the speed of light made a difference in processing signals correctly.

I was also doing photography. I have some very expensive studio lights.

The lights were fired remotely. When the flash on my camera went off it would trigger all of the studio lights. I was very concerned about synchronization issues. I carefully calculated the time it would take for the light to travel to the sensors, looked up the response time of the sensors and everything else. There was some serious lag involved.

I went to my mentor and asked “How can this possibly work? The lag is horrible.” He carefully pointed out that my lag was measured in nanoseconds. The shutter to my camera was open for 17 milliseconds and the flash only existed for a very short period of time. The lag would have to be nearly one million times larger in order for it to have any effect.

I had failed to grok large numbers.

When dealing with profits most corporations run on slim margins. While the over all cost to you of a good or service might be high, no one entity in the chain of creation is running at unreasonable margins.

If the corporations could have raised their prices in 2019 as much as they have today and still sold goods, they would have. They didn’t because their competition would have undersold them. If every seller of oranges is raising their price and nobody is undercutting that implies that people are willing to pay that price and that the seller is unable to cut their prices to get more sales.

Inflation happens when the value of money goes down. Prices go up when demand out strips supply. We are currently experiencing both. The government is injecting more money into the economy which devalues it. The supply for many goods, petroleum products in particular, is going down. Demand is exceeding the supply. Prices will go up.

As our costs go up, we in turn raise our prices to cover those costs. Which in turn raises the costs to those that purchase our goods or services.

We need new policies before we are all billionaires that can’t afford to buy a loaf of bread.

— Workers are being punished for inflation. The real culprit is corporate greed

2 thoughts on “Inflation is the Big Corporations Fault”