It is all about destroying western civilization

How much of the current change in climate is the direct result of human actions? That’s a different question. I remember reading about the changes in climate post 9/11. With so much air travel stopped and so many people just not driving there was a measurable change in temperatures/climate.

While the doomsayers claim the damage is not reversible, the measurements after 9/11 suggest that it is reversible and without much real effort. I don’t know.

I use to follow the science of “climate change” a bit more closely. I longer do. Part of the issue is that there is so much political capital invested in climate change that I do not believe that it is possible to get balanced answers.

Years ago I did some work for a part of NOAA. One of the things that we were doing was digitizing all of the old weather records. These were hand written records going back a hundred years. All of these were being manually entered into the system to be processed.

What we observed was that the temperatures were about the same a 100 years ago vs what we were seeing at that time, mid 1980s. We were looking because there was a huge concern that the next ice age was overdue and we should expect the glaciers to be advancing south from Canada in day.

In the 1970’s I read an article in Popular Science that said that scientist were considering shooting rockets over the poles in order to disburse a fine powder of carbon which would absorb heat from the sun in order to stop the ice age.

A few years later it was “global warming” which was the problem. The temperatures were rising and the world as we know it was going to end because the temperature was going up.

They remember the filth of London from all the coal burning stoves that put real carbon into the air. Carbon that turned things black. People know that carbon is black and dirty and hard to clean up. Anybody that has ever had to clean a camp pot knows the black carbon film a campfire leaves behind.

So when people hear “carbon emissions” they don’t think of an odorless, tasteless, clear gas, they think of the smoke spewing chimmies of times gone past.

There is no way to disprove the climate change position which makes it pseudo science, at best.

Recently there was a breakthrough in nuclear fusion studies.

On Tuesday [Dec 6, 2022], the head of the Department of Energy and other federal scientific leaders announced that a fusion reaction they ran at the Lawrence Livermore National Laboratory in California achieved net energy, meaning the reaction generated more energy than was put in to initiate the reaction. It’s the first time humankind has achieved this landmark.
–CNBC

This is a huge breakthrough. They pumped in two megajoules of energy and three megajoules came out. While there have been a number of announcements in the past saying somebody had gotten fusion to work, most of the time the amount of measured energy was so small as to possibly (likely) be a measurement error rather than actual fusion.

To think of this we need to understand some units. A Joule is a measure of Energy. The average American household consumes around 29.5 kWh per day. This is around 106.3MJ

They dumped in a half hour worth of Energy use and got out 45 minutes worth of energy.

This is wonderful news. This is a true breakthrough. Yes, I’m repeating myself. Now that they have accomplished this, multiple times, and it looks like other groups should be able to reproduce, they can start work on making this all work in a smaller package.

This is a step towards large amounts of power available for much lower costs. My Grandkids will likely see the first nuclear fusion power generators dumping power into the grid. Depending on a number of things these fusion reactors might even become small enough to putt in a house or maybe power trains or trucks or at some point, even cars.

So the left is celebrating. If this works as it should this should end our dependence on fossil fuels for powering modern society. 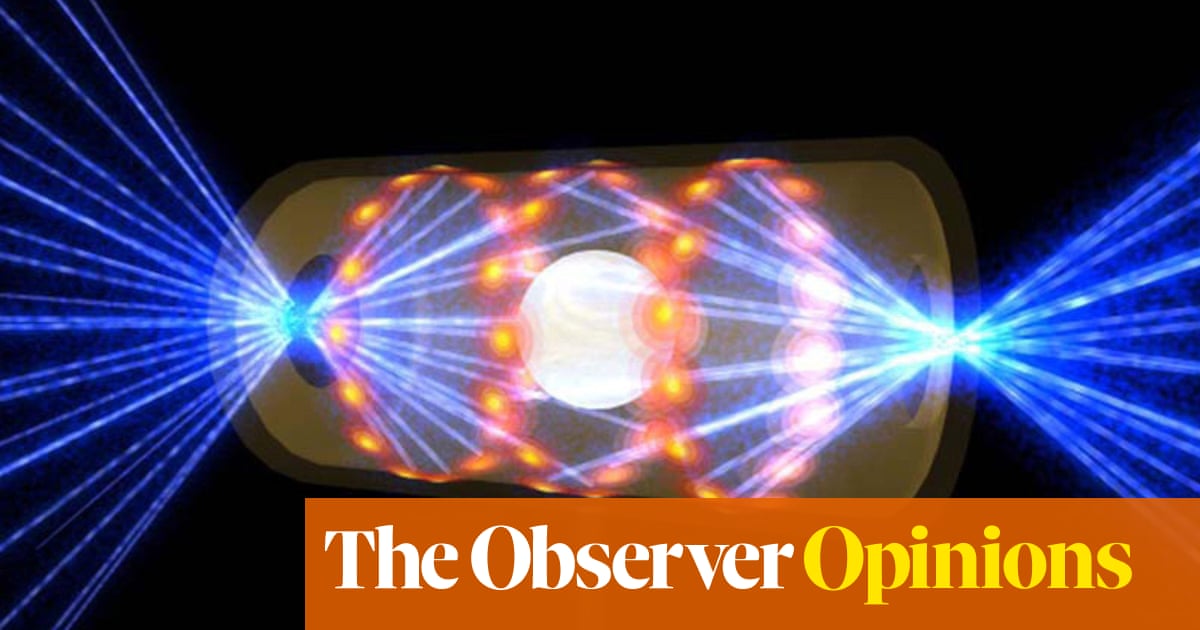 Despite the hype, we shouldn’t bank on nuclear fusion to save the world from climate catastrophe | Robin McKie
Last week’s experiment in the US is promising, but it’s not a magic bullet for our energy needs

This article goes on to say that they have heard it all before and it is likely just the same old hype without any real path to success. Even if it did work it is years away from commercial power plants using fusion.

“Here, scientists are clear. Fusion power will not arrive in time to save the world.”

The only path that is ever possible for these cultist is to stop using fossil fuels right now and destroy our civilization. Because… reasons…

6 thoughts on “It is all about destroying western civilization”