It is only racist if Trump Says it: Baltimore Edition 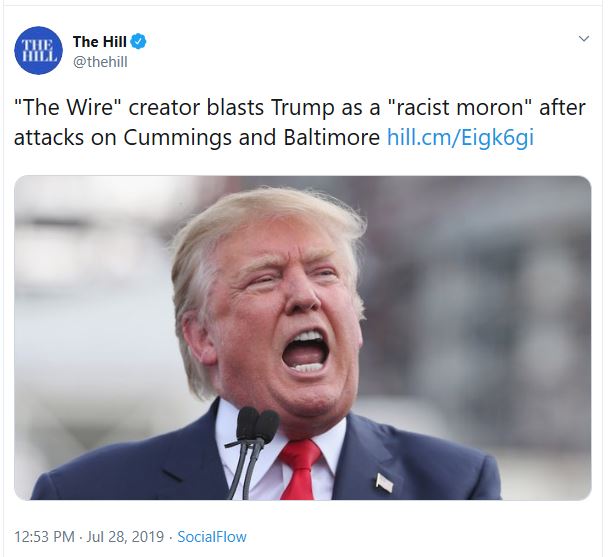 According to The Hill:

David Simon, the creator of the HBO series set in Baltimore, “The Wire,” on Saturday denounced President Trump as an “empty-suited, race hating fraud” following his attacks on Rep. Elijah Cummings (D-Md.) and the Baltimore district he represents.

“If this empty-suit, race-hating fraud had to actually visit West Baltimore for five minutes and meet any of the American citizens who endure there, he’d wet himself,” Simon said on Twitter moments after Trump targeted Cummings and his congressional district.

If there is somebody who has done its best to portray Baltimore as a drug and rat infested cesspool in Maryland, the prize goes to David Simon. Thanks to his series of Homicide: “Life on the Streets” and “The Wire” (both lionized as gritty and realistic) David Simon has pushed a grand total of 188 hours of “Baltimore is a shithole” with the backing of innumerable awards given by his fellow Hollywood workers including several Emmy awards.

But David Simon is not a racist because he is held to a (D)ifferent set of rules: As long as you are against Trump, you can sell little black girls to a child prostitution ring and get away with it.  And if you are lucky, you get a plane ride with Jeffrey Epstein once his charges are dropped again.

PS: No, it is not a mistake. I wrote (D)ifferent like that on purpose. When I saw it posted by reader Chris J. in Facebook,  I just had to steal it. I am guessing only (D)emocrats will be triggered by it.

8 thoughts on “It is only racist if Trump Says it: Baltimore Edition”