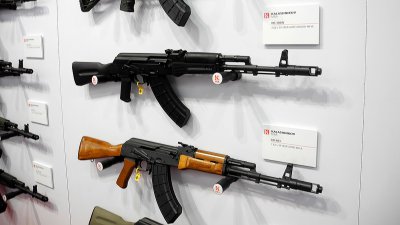 LAS VEGAS  — The famous Kalashnikov AK-47 assault rifles have been made in frigid Moscow since their inception 69 years ago. Soon, they’ll be made in sunny Florida, too.Kalashnikov USA has been approved by the city of Pompano Beach to assemble guns there

Welcome to the Gunshine State! You can hear the screams of horror emanating from Broward County.  Pompano Beach is right smack in the middle of Congressional District 20 held by US Rep. Alcee Hastings (Dem, Rated F) which got it redistricted from Debbie Wasserman Schulz. (Dem, Rated F, Not all Up There). Somebody drove a stake down the middle of Liberal Broward County’s heart.

Hat Tip to Eric W. who wonders if they will be offering tours…

4 thoughts on “Kalashnikov to open AK-47 factory in Florida. ”