Let’s do the Everytown Twist 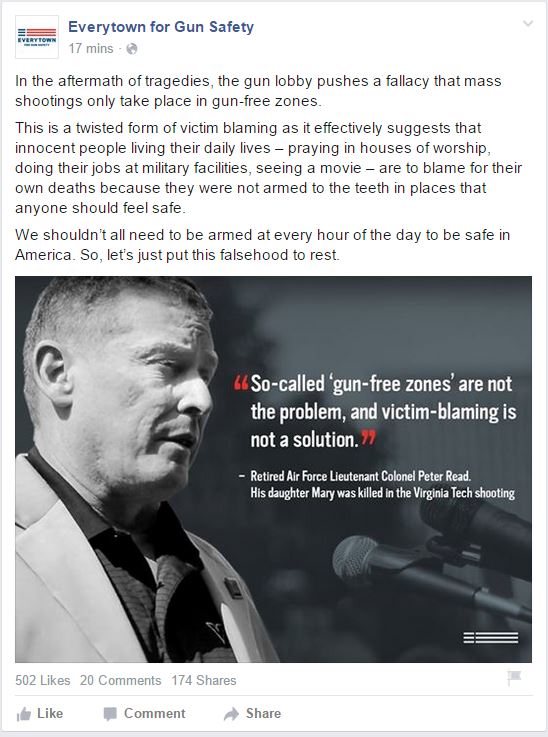 In the aftermath of tragedies, the gun lobby pushes a fallacy that mass shootings only take place in gun-free zones.

This is a twisted form of victim blaming

No, it is called statistics. It has numbers and stuff.

as it effectively suggests that innocent people living their daily lives – praying in houses of worship, doing their jobs at military facilities, seeing a movie – are to blame for their own deaths because they were not armed to the teeth in places that anyone should feel safe.

Got it wrong. we are not suggesting that they are to blame. We are saying that blood-thirsty sadists like your Boss Bloomberg are to blame for encourage and force people into hunting preserves for the criminally insane while he walks around with a phalanx or armed bodyguards.

We shouldn’t all need to be armed at every hour of the day to be safe in America. So, let’s just put this falsehood to rest.

Does that mean your boss and Shannon Watts will mingle with us, Little People without their Pistol-Packing Traveling Companions?

And I am very sorry for Lt. Col. Read’s loss, but if he has a complaint, please address it to the Virginia Tech honchos who guaranteed students and parent that a Gun Free VT was safe.

“I’m sure the university community is appreciative of the General Assembly’s actions because this will help parents, students, faculty and visitors feel safe on our campus.”
Virginia Tech spokesman Larry Hincker in January 2006 after a Campus Carry measure was defeated in the Virginia Assembly.
Seng-Hui-Cho proved Mr. Hincker’s statement was deadly wrong on January 16, 2007

And for the Media people at Everytown, an oldie and classic:

Considering the previous post showing the innate racism of Everytown, I hope they don’t feel insulted because I am dedicating them a video of a black person singing.

8 thoughts on “Let’s do the Everytown Twist”