A few years later I became much more interested in firearms. I started watching Forgotten Weapons to learn something. I watched a couple of AR-15 builds before YouTube took them all down. It made me start to actually take an interested in how the firearms I owned actually functioned.

Think about this stupid little thing for a moment, how does pulling a trigger back cause a sear to move downward to drop the bolt on a simple blowback open bolt gun. There has to be a linkage of some sort. Is the sear in front of the trigger or behind it?

The linkage in an AR-15 is actually pretty simple, in keeping with the linkage used in a Colt SAA. Pressing the trigger causes the trigger to pivot. A bar at nearly right angles to the trigger towards the front then moves downward. The hammer has a sear that rests against that bar. As the bar is pulled off the sear, the hammer drops firing the gun.

You might know all of that. You might have looked inside your firearm(s) to see how it works. I had not. I just opened an AR-15 to verify that I had all the parts right and the functioning correct.

It takes a bit of curiosity to bother to learn all of that.

At one point I had an opportunity to shoot a Colt SP-1. This was one of the first commercial AR-15s. It was an M-16 with two modifications. No auto-sear and the third hole was not drilled in the receiver. It had a full auto selector switch, the M-16 bolt carrier and all the other magic parts.

And here is the thing, if you switched the selector to full auto it could slam fire. The fix was simple, replace the full auto selector with a semi-auto only and it would no longer slam fire.

Slam firing is considered a “not good” event. Even though there are many firearm designs that are intended to “slam fire”, I.e. any firearm that has a fixed firing pin and fires from an open bolt. For higher pressure rounds there must be a full lock up before the round is fired.

So what about the AR-15 platform? Is it “safe” if it slam fires?

Yes, it is. Assume for a moment that the firing pin in your AR-15 got stuck in its forward most position. You drop the bolt, the bolt strips a round from the magazine and pushes it into the chamber. The bolt head is in contact with the base of the round.

The round comes to a stop against the shoulder in the chamber, the bolt face is now pushing up against the face of the breech. The firing pin should be indenting the primer. But it isn’t.

The firing pin does not extend past the face of the bolt until after the bolt has rotated and the chamber is locked.

With the firing pin stuck in its forward most position the rifle will slam fire but only after there is full lockup.

It is a design feature.

Learning those types of things about firearm design is amazing to me. Because of that I became much more willing to detail strip my firearms. To look at how they function. What does this lever do? Why is this cut here? Why did they do this little thing here?

As you do more you learn more and you begin to see where things might have gone wrong. As an example, a friend gave me a long term loan of a semi-auto shotgun. It didn’t work very well but it did go bang when you pulled the trigger. It was only the semi-auto functioning that was questionable. I cleaned it and put it back together. It worked better but wasn’t reliable.

Then one day I had it stripped down and was looking at the piston. The more I looked at it the sadder the O-rings looked. I decided I was going to replace them. So I got out my picks to remove the O-rings so I could measure them and get the right replacements.

It was then that I realized, those weren’t O-rings. It was carbon build up. My friend had never cleaned this shotgun after he acquired it. The carbon build up in the grooves had gotten so bad it was interfering with the functioning of the firearm.

Once I got the grooves cleaned and everything lubed and put back together, it functioned flawlessly. I had fixed a broken firearm.

Since that time I’ve repaired a few firearms. Nothing particularly hard, just had to be done. Replacing sights is something I do myself now, I didn’t originally. It was something I would have a gunsmith do.

Sometimes the AR platform is called “Barbie for men”. You can customize it however you want. You can put lights and optics on. Flare launchers, lasers, sound systems, chainsaws, bayonets can all be attached to your AR.

At the top of this post is a picture of a $250 drop in trigger. Open up your AR, push out two pins and most of the guts of the lower receiver spill out on to your workbench. Slide this trigger into place, push the two pins back into place and you now have a beautiful trigger with a straight trigger and a 3 pound pull. Beautiful. 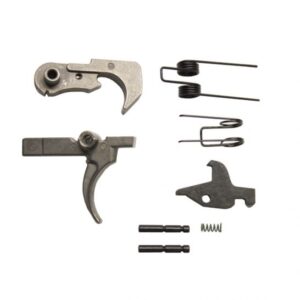 Or you can pay $35 for a complete fire control group, i.e. the two pins are included. This is suppose to be better than a mil-spec mil-issue trigger, but it is likely almost the same thing.

There are a hundred different options out there.

There are just as many options for pistols. Glock replacement triggers. 1911 replacement hammers. Some 1911s have solid hammers, some have a cut out. You can get different triggers. All of these are things that allow you to make your pistol yours.

A pistol my local gun store was selling had loose slabs. Turns out that the previous owner was a competition shooter. He had added weights under the slabs which required longer screws. The local gun store had taken the extra weights off the gun but didn’t notice that the screws were too long. A simple set of replacement screws and the slabs are nice and tight again.

For the residents of Washington DC, they are soon going to be unable to buy replacement parts because of a judgement by D.C. Superior Court Judge Ebony Scott. She was appointed by Biden. Her previous career was as with the D.C Office of Human Rights. Then she went to work for the Mayor’s office. There were five judges sworn in at the same time. They all had their official swearing in pictures taken. In her picture she, the Chief Justice and the person holding the bible are all masked. There are no masks in any of the other swearing in images.

It appears she has all the right qualifications to make law from the bench.

No judge gets to decide what is and is not a firearm. That is decided by congress. And congress has made that law. A judge can say that according to the law as set out by congress something is a firearm, but that is based on the actual pieces of that are being evaluated. Not on her opinion of a companies speech.

Scott cited “Polymer80’s alarming belief” that the sale of its firearms is legal in the district as part of the reason the court granted the plaintiff’s request for a permanent injunction.

The law of intended consequences. Three times is enemy action.

Judge rules ‘ghost guns’ are firearms and bars Polymer80 from selling them to D.C. residents