Marion Hammer of the NRA retiring

“I have fought for Second Amendment rights and the rights of gun owners for many many years, and that’s my legacy,” Hammer said in an interview Thursday. “I stood tall against a wall of people who wanted to destroy the Constitution and punish law-abiding people for the acts of criminals.”

Different people have different views of Marion. I think Miguel summed it up best with this picture of her being the only guns right person in a meeting with representatives while a half dozen Mom’s Demanding sat in their red t-shirts across the aisle from Marion. 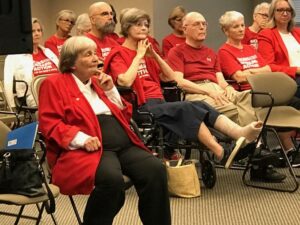 She has been in the fight for a very very long time. She has been there when nobody else took the time to speak on our behalf.

There are others that look at her huge salary from the NRA and wonder if it is worth it. They wonder if she is part of the group keeping Wayne in power.

Regardless of what she is getting paid, regardless of how much she took from the NRA, the place where Florida is today regarding Stand Your Ground, Shall Issue and many other issues are because of her efforts, her lobbying.

Because of Florida, many other states moved to shall issue. When I got to my home state it went from a multi-month task with a low probability of success with hundreds of dollars involved to $10 and 10 days. My state went to Shall Issue because Florida went there first and proved that blood would not fill the streets.

So thank you Marion Hammer.