Aretha Franklin’s funeral was a spectacle of racists and rapists gathered together engaging in lewdness and groping in an insane travesty of what a funeral should be.

So it should have been no surprise that Maxine Waters was there being stupid.

Maxine Waters got a rousing show of support at Aretha Franklin's funeral, responding with the Wakanda salute from "Black Panther." https://t.co/NdrLNMxcY7

For full disclosure, I haven’t seen Black Panther yet.  At some point it will come to Netflix of HBO and then I’ll see it.

What I do know is that Black Panther has become a “cultural phenomenon” for black people.  Yes, it is a major big budget superhero movie with a mostly black cast that was taken seriously as part of a huge, multi-billion dollar movie franchise.  That is worth noting.

But that’s not what the phenomenon is.  One aspect is the argument that “Wakanda is what Africa would be like if it weren’t for European colonialism.”  Seriously.

Never mind that is an impossible conjecture.  While the Portuguese did have colonies in Africa going back to the 1400’s, they were little more than small, coastal, trading sites.  The Dutch did settle in small colonies in what is now South Africa in the 1600’s, but the major conquest of Africa didn’t take place until the late 1880’s with the Scramble for Africa.

Africa was a long way from Wakanda for a variety of reasons.  If you read the excellent book, Guns, Germs, and Steel, one of the considerations is Africa’s wildlife.  The horse and cattle native to Europe and central Asia were domesticable.  The African water buffalo and zebra were not.  There were just too many apex predators and they were too unapproachable.

Pythagoras and Newton couldn’t have developed Geometry and Calculus if they had to spend all day subsistence farming.

The zebra had more to do with Africa not being Wakanda than England.

I learned long ago why white supremacists are the way they are.  They are typical bullies, they have no self esteem.

There  is a joke that I’ve seen going around the internet that usually accompanies a picture of an obese, “people of Wal-Mart” looking guy in Nazi armband that says “why is it that white supremacists are usually such bad examples of white people.”

the possible origin of this meme comes from the comic Preacher. 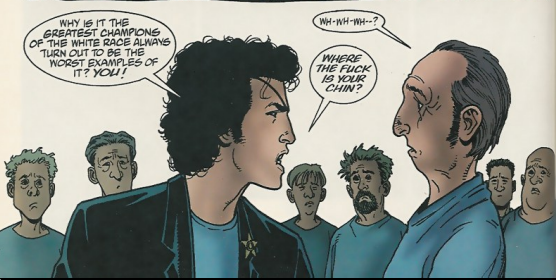 These people are losers.  They have nothing going for them in their lives.  They need something to make themselves feel better so what they find is racial supremacy.

The movie American History X was accurate, every one of the supremacists in that movie was an uneducated loser living in squalor with a dead end job.

Even the Nazis, actual German Nazism, was the result of a lack of national self esteem brought on by the Treaty of Versailles.  A central principle of Nazism was “Germany is in the dumps because other races undermine us, we are superior Aryans.”

That psychology is at the heart of the Black Panther phenomenon.  If it weren’t for white colonialism, Africa would be a hyper-technological super state.  Every black man in America is really N’Jadaka, an African warrior-prince.

So when Maxine Waters gives the Wakanda salute, like it’s a real honorific and not something made up by Hollywood earlier this year, she’s clearly identifying with the fictitious ethno-supremacy that low self esteem blacks and SJW’s have glommed onto.

What is particularly sad about that is that while Maxine Waters is an incredibly stupid person who has used nothing but corruption and racial animus to keep getting elected to Congress, Aretha Franklin was an accomplished woman.  It’s doubtful Franklin would have bought  into the low self-esteem driven ethno-supremacy that Waters has.

7 thoughts on “Maxine Waters and Ethno-supremacy”