Maybe the extreme Trans ideology will be self correcting like a wild fire.

If you haven’t been paying attention, the Left’s favorite author, JK Rowling, has been CANCELLED!!!

Why?  Because she tweeted supported for a woman in the UK that acknowledged a biological reality that the radical trans-activists have decided is transphobic.

Now, in response to a significant UK court case, Rowling has provided what might be the ultimate, upsetting confirmation of her perceived transphobic leanings — and many fans are taking the revelation as a betrayal of the values of tolerance, compassion, and equality that they first learned from the Harry Potter series itself.

Rowling is customarily outspoken about her politics, which can be generalized as ranging from moderately liberal to progressive — though over time, she’s seemed increasingly less so than her fans. On Thursday morning, many of them woke up to a tweet from Rowling, which might seem at first to be a typical example of Rowling’s broadly liberal feminism.

Dress however you please.
Call yourself whatever you like.
Sleep with any consenting adult who’ll have you.
Live your best life in peace and security.
But force women out of their jobs for stating that sex is real? #IStandWithMaya #ThisIsNotADrill

In context, however, Rowling’s tweet reveals itself as a shocking dismissal of transgender identity: its first three lines seem to directly attack trans identity, while its final line mischaracterizes the facts surrounding a court case that involves significant transphobia.

So what is the #IStandWithMaya thing that caused the Progressives to turn on Rowing for being a TERF?

Maya Forstater, 45, did not have her contract renewed after posting a series of tweets questioning government plans to let people declare their own gender.

Ms Forstater, who had worked as a tax expert at the think tank Center for Global Development, was not entitled to ignore the rights of a transgender person and the “enormous pain that can be caused by misgendering”, employment judge James Tayler said.

“It is a core component of her belief that she will refer to a person by the sex she considered appropriate even if it violates their dignity and/or creates an intimidating, hostile, degrading, humiliating or offensive environment,” he continued.

Ms Forstater had argued “framing the question of transgender inclusion as an argument that male people should be allowed into women’s spaces discounts women’s rights to privacy and is fundamentally illiberal (it is like forcing Jewish people to eat pork)”.

Here are screen grabs of the tweets that caused this woman to lose her job. 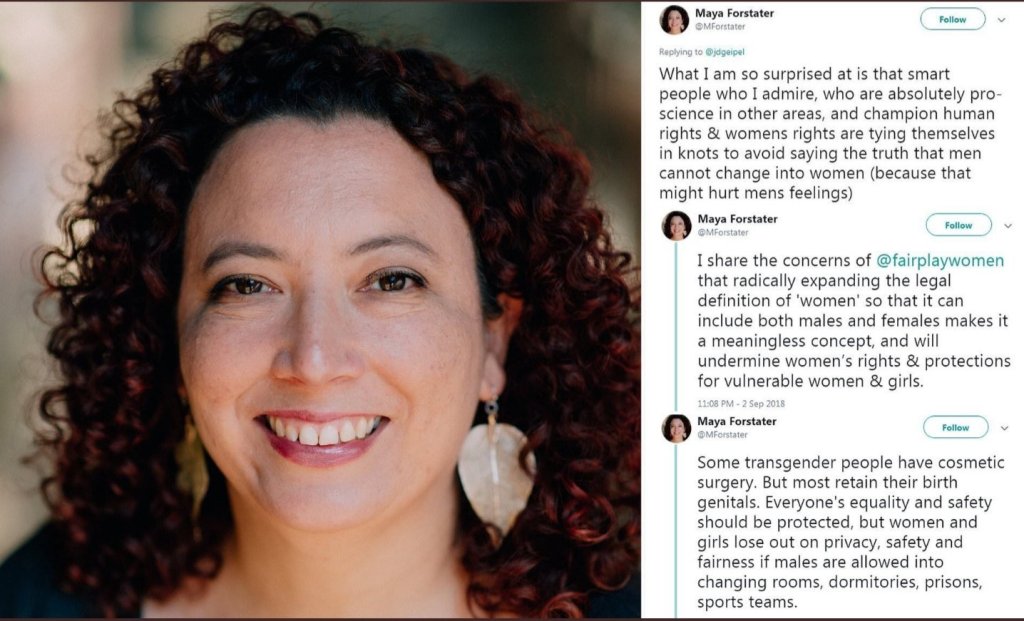 She is not wrong.  Biological sex is real.  No amount of hormones and surgery cannot alter that fact.

This reality has severe implications, like letting a hulking beast of a man on a woman’s rugby team “fold [opposing players] like a deckchair” or letting a trans-woman MMA fighter crush a female opponent’s eye socket.

JK Rolling’s tweet seems to support what seems to be the majority moderate position on trans people.  They have the freedom to dress and identify as they want, but the biological reality is immutable, and there are some times (like sports) where that reality should take precedence.

The extremist trans ideologues want to erase the very idea of biological sex and sex differences, and because Rolling diverged from that extreme position, she must be canceled.

How do we in civilized society deal with this reality denying trans-ideology?

We may not have to for that much longer.  This may be a self-correcting problem, like a wildfire that burns itself out.

Where Are All The Trans-Friendly Gynecologists?
The medical field still falls short of providing proper care to transgender patients. This is especially true for OB/GYN services.

What the actual fuck is this mess?

It was a battle for Jaden Fields to even get the appointment. When he, a trans man, tried to make arrangements with a gynecologist’s office, he was met with disrespect and disbelief. So much so that his primary care provider had to make the appointment for him. When he arrived at the office, he was dismissed, misgendered by the staff and eventually had the police called on him.

Fields, who described his experiences for Hello Beautiful, is far from the only transgender person to have a problem finding respect and affirmation from the health care establishment.

I have a suspicion here, let me see if his Hello Beautiful post confirms it.

When I called to make an appointment, they kept asking me the name of the patient because they didn’t believe it was me. My medical records list my gender as male so they didn’t believe I would need to see an OBGYN. The first person I spoke to thought I was trying to prank her, so I had to have my primary doctor set up the appointment for me. When I arrived, once again, I had to explain the appointment was for me and that I’m a transgender man. I explained that I was there for a pap smear and the nurse told me I didn’t know what a pap smear was, and they couldn’t help me.

See, the problem is right there in bold.  Here is a person who looks like man, with MALE on his records asking for a pap smear.  No wonder the nurses were suspicious.

Maybe, just maybe, medical records should be medically accurate.  If records do no say Female they should convey at an instate that the patient is something other than a biological and anatomical male.

I’ve mentioned this before.  Symptoms of heart attacks in women are very different than that in men.  Women don’t clutch their chests and left arms and fall over.  If a trans-man is having a female-typical heart attack and his records indicate he’s a man, he’s going to die while the doctors bumble fuck around not realizing the symptoms don’t match the patient.

Then I will feel sorry for the doctor who gets sued for malpractice.

My honest recommendation is that trans people get a medical ID that indicates their status, e.g. trans-male, on testosterone, no bottom surgery.

Women metabolize general anesthetics differently, and that information would be critical to know in emergency surgery.

“Engaging with the medical system as a trans person is always a scary proposition,” Katelyn Burns, a trans woman, freelance writer and Vox contributor, told HuffPost. “The health care system’s lack of general competence with trans people absolutely is a deterrent for all trans people to go to the doctor, but when we do find good medical providers, we tend to stick with them.”

Trans people are 0.4% of the population.  Just like people with other rare conditions, it is incumbent on them to find doctors who specialize in their condition and to stick with them.

My father had Crohn’s disease with UC.  He had to find a gastroenterologist that specialized in that, not just any GI would do, and that is much more common than trans-health.

It’s presumptuous and entitled to assume every doctor would just have a working knowledge of trans-medicine.

While there are excellent providers like Burns’ out there, the medical field in general still falls short of providing proper care to transgender patients. Deadnaming, improper pronouns and a general lack of knowledge about transgender issues lead many from the trans community to avoid the doctor altogether. General questioning of patients’ transgender identities is another common reason for doctor avoidance, said Kristie Overstreet, a licensed psychotherapist based in Orange County, California.

Research supports this. A 2018 study from Ontario, Canada, found that 54% of trans men surveyed avoided going to the gynecologist. Approximately 59% of those who avoided it cited being misgendered as one of the main reasons; 70% cited having to educate their providers themselves was another deterrent; 86% said it was due to the gynecological exam itself, which many respondents found physically and emotionally distressing.

A more graphic fear was: ‘As a man, will getting in the stirrups for an exam make me feel like a girl?’”

Lesson from a cancer survivor (despite what the Pink Bandana Mafia might think) with bowel problems:

Get fucking over yourselves.  I have had no less than six colonoscopies by the time I was 30.  I’ve had tubes jammed up my ass, in my dick, and down my throat.  I’ve been turned into some doctor’s personal water ballon, having my colon filled with a liter of Gadolinium contrast (not the kind you drink) and stuck in an MRI machine.  I have no shame telling doctors about my medical history or experiences.  Hiding information from my doctor only makes their job more difficult and hurts me.

I spent five days after kidney surgery with a urinary catheter.  They were pushing IV’s into each arm at full bore, and draining it out of me just as fast, to make sure I flushed out any clots or other things before they became obstructions.

Then they had to remove my catheter.  A nurse did it, while I was awake, in front of a bunch of med students.  She popped it out and I peed on myself.  Your body forgets how to not do that after several days with a catheter.  I actually had to pinch my dick closed like a garden hose to stop until I could get over to the toilet.

After my surgery, I was on so much opioid pain killer, that with my bowel problems, I got totally blocked up and couldn’t poop.  You have to poop to be allowed to leave the hospital, so after several days, a nurse came in had me lie on my stomach and started fishing around in my asshole to unstick me.

Yeah, it was all humiliating.  I’m still alive.

If you don’t want to see the gynecologist because you think it’s unmanly to get into the stirrups, if you die of cervical cancer, you have no one to blame but yourself.  My well of sympathy has run dry, fuck you.

“First, medical providers need to check their conscious and unconscious biases. They also need to be aware of the historical trauma the medical industrial complex has inflicted on people of color. There is a legacy of distrust because of that. I think medical providers need to understand the impact of systemic oppression on communities of color and how that trauma can lead to negative health outcomes,” he wrote. “When it comes to trans people specifically, I think they need to move away from gendering body parts and look at us as human beings.”

How dare testicles be gendered.

I know this sounds cruel, but maybe this extreme trans ideology of victimhood will eventually burn itself out when all the radical trans-women who fear admitting to a doctor that they still have a prostate die of prostate cancer.

One would think that when an ideology becomes suicidally dangerous people will abandon it, but here they plug ahead, denying reality and complaining when it bites them in the ass.

Although, that makes this into a self-correcting problem.

14 thoughts on “Maybe the extreme Trans ideology will be self correcting like a wild fire.”