And that is the way it was told to God and Country: 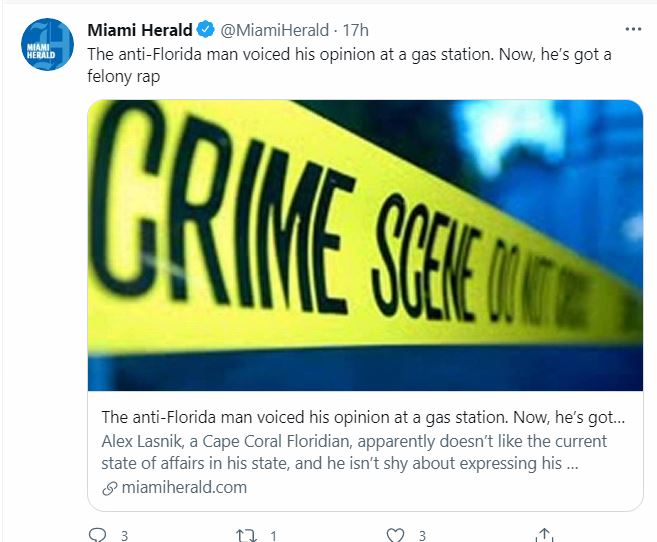 Alex Lasnik, a Cape Coral Floridian, apparently doesn’t like the current state of affairs in his state, and he isn’t shy about expressing his opinions.

Except there is more to the story because the headline was 100% Liberal clickbait.

The anti-Florida man is not alone. Except Cape Coral police say that Lasnik did more than just vent vocally.
Now, the 27-year-old Lasnik faces a third-degree felony aggravated assault with a deadly weapon without intent to kill charge, according to Lee County court records.
According to an arrest report, a Cape Coral officer responded to a call that came from a Marathon gas station on Prado Boulevard in Southwest Florida at 11 a.m. Wednesday, July 21.
A “disturbance involving weapons,” the caller said.

Hmmm, this is just a bit more than a simple disagreement that turned into a full attack against the God Given Right to Free Speech by the goons under orders of the Governor.

When the officer spoke to the caller, he was told Lasnik was arguing with the clerk inside the gas station and when he left the store “he was making vulgar statements about Florida and being extremely loud.”
The caller, identified as “the victim” on the report, told Lasnik that he should go back to his state if he did not like Florida.
“This upset Mr. Lasnik,” the arrest affidavit said.
According to police, Lasnik reached inside his Mitsubish Mirage that had been parked near the victim and pulled out a small frame Glock 43X handgun, cocked it and pointed the firearm at the victim’s face.

You get the feeling the reporter is somewhat on the side of Lasnik thee way he writes this article by the use of “the victim” as if the clerk had it coming for disagreeing with our Hero, and I would not e surprised if that was the case.

Here is the same case as presented by a local TV station:

And this is why I will be joyfully degust an adult beverage the day the Miami Herald finally closes its doors and its offices in whatever strip mall is running from sport a “For Rent” sign.