I was keeping this one in the back burner: 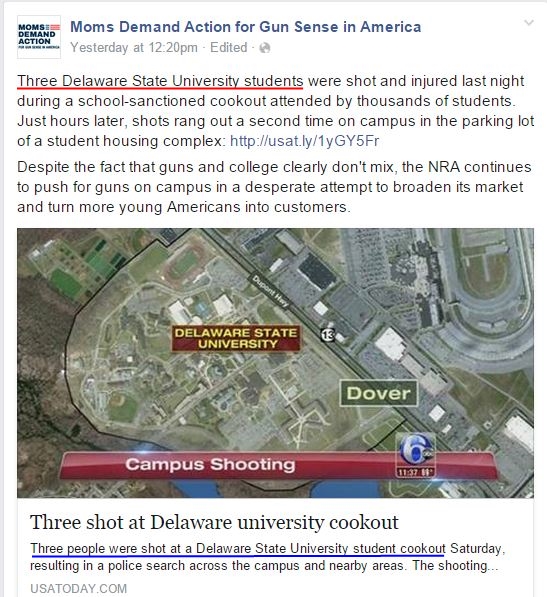 Even though the news article did not specify students,  Moms went ahead and assured us they were students. Drunk, irresponsible, immature students shooting poor innocent, fragile students (Yeah, I can’t get past this particular contradiction either) and how dare the NRA to say we need guns in Campus!

Well, it neither the victims and apparently not the shooter were campus people:

Though the three people shot at a Delaware State University (DSU) event still remain anonymous, the school disclosed they were all males and not students.

Carlos Holmes, a DSU spokesman, told the Associated Press the three men were taken to Kent General Hospital Saturday night, where they have been in stable condition since. Holmes would not provide any additional information on the victims.

“We can definitely tell you that the three victims were not DSU students,” Holmes said. “The event had a lot of guests… a lot of people that came from the surrounding communities and other schools.”

You know there was something fishy with the whole incident as reported by Shannon’s Social Media Minion when you have a school shooting on a day so close to the anniversary of Columbine and the Mainstream Media went mute about it.

So, the “Throw something against the wall and see if it sticks”  media strategy is now the official policy of Moms Demand Action But Not The Truth.

And the New York Time wonders why we are winning.