Moms Demand: ZMOG! They are shooting kids in Nightclubs in Miami….wait, what? 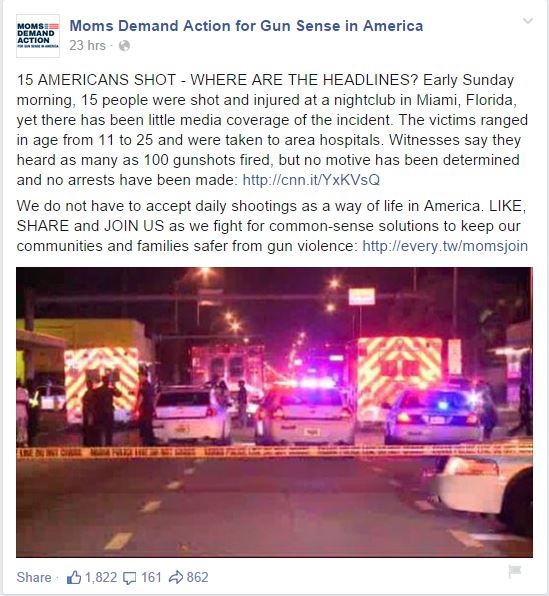 Yes, several minors were shot at a local nightclub last Sunday in Miami. And not only Moms Demand but the editors at the Miami Herald have no problem blaming the usual suspect: The NRA.

But as usual, Moms Demand are very good at parsing the language.  They said “Early Sunday morning, 15 people were shot and injured at a nightclub in Miami, Florida.” and they are right…sort of… the shooting happened at 2 am.  Now, I know that there are clubs that have parties (non-alcohol) for the younger crowd, but a bunch of kids under 18 and as young as 11 in a Nightclub (that incidentally does not have the permit to be a nightclub but just a restaurant with a limited alcohol license) at two in the morning in Liberty City (gang territory) is just absurd.

According to witnesses, the exchange of fire happened between some people who arrived to the local and people from the inside so guns were already in place brought in by those attending the soiree. Who had what is not know yet.

The nightclub is shut down now. Besides the license, they found several code violations and the owner was arrested. The investigation is still ongoing and maybe we will hear more at a later date.

But even some of the followers of Mom Demand had trouble digesting the idea that kids were at a nightclub.

Sue Hudson Craker The question has to be asked why were 11 year olds in a nightclub???? Where is the outrage over that?
Yesterday at 8:03am · 20 likes
Patty Penner why were 11 y/o’s in a nightclub?
Yesterday at 8:08am · 6
Two make sense…but Social Justice Warrior comes to the rescue:
Julie Marble Sue: don’t blame the victims. Instead of nightclub think dance party. These are common for teens held at no alcohol venues.
Kim Ashton Where were the the parents?
Tamara Bain Hill Just a question…11 years old + early Sunday morning + nightclub???!?
Ofelia Utset Has been covered in the Palm Beach Post. Terrible event, shouldn’t be happening. Another question is why were so many kids in a nightclub at 1 am? Some as young as 11!
The “What was an 11 y/o doing in a nightclub?” run about 30% of the comments. GThe rest are the same old blame the NRA and there is even a guy who wants to move to Guatemala because is safer there…Oy!
So now you know folks, the NRA hired a nightclub, stuffed it full of children, gave them guns, booze and let them unsupervised.

5 thoughts on “Moms Demand: ZMOG! They are shooting kids in Nightclubs in Miami….wait, what?”