This is a Tweet from a professor of Economics at the University of Utah. 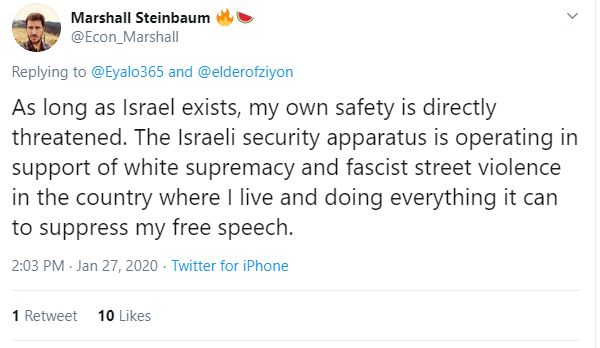 Because the Jews have a nation and self-determination in our ancestral homeland in a little strip of land between the eastern edge of the Mediterranean sea and the Jordan River, his life is in danger in Salt Lake City, Utah.  And that is because the Israeli Defense Forces are supporting white supremacists, who do and have hated the Jews, to engage in violence in the United States, which is Israel’s oldest ally.

There is a reason for that, Hogg only learned his bullshit at Harvard.

Econ Marshall here learned his bullshit at the University of Oxford, the finest academic institution on the planet.

This is really nothing but paranoid antisemitism, but given that it comes from a professor, it’s given the patina of respectability and not the lunatic ravings of someone who if you replaced the Leftist boogieman of “white supremacy and fascist” with “black” could easily pass for a Neo-Nazi.

I long for the day when someone with a degree from an elite university stands up and says something and the rest of society says in unison “sit down and shut up, you fucking ignorant moron.”

The world will be a far better day when that happens.