Miguel and I covered how Smash Racism DC harassed Ted and Heidi Cruz out of an Italian restaurant in DC the other  night.

Not right that Senator Cruz and his wife Heidi were surrounded and forced to leave a restaurant last night because of protesters. The Cruz family should be treated with respect.

Beto is an anti-gun jagoff who wants to try and ban AR-15’s, but I have to give credit where credit is deserved.

He’s Lefty supporters turned on him.

Harassment is justified if it helps you win, a.k.a., the ends justify the means.

“I don’t fully understand policy, the law, or the situation, but I’m mad about it so I’m going to harass a public official whenever he is in public.”

Physical harm?  Financial distress?  This is in the logic of “everything that hurts my feelings is violence” we saw from the college campus protests.

Let me be clear here: not taking care of people cradle to grave is not physical harm and financial distress.

But what we saw at the restaurant was more than rudeness.  There where threats in between the nonsensical mantra of “we believe survivors.”

“I support terrorism.  If he doesn’t do what I want him to, I’m going to make him suffer.” 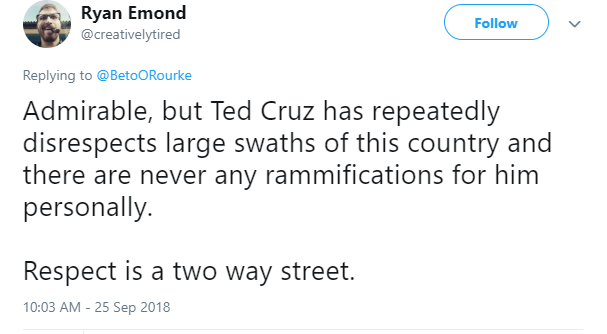 “Cruz’s policies hurt my feelings so it’s okay to scream in his face, scare his wife, and threaten to hurt him.”

This is all the logic of terrorists.  They disagree with policies Cruz supports, sometimes those policies even hurt their feelings.  So they thing it is justified to intimidate and threaten Cruz and his wife.

They twist facts and logic to justify their hatred and blood lust.

There is absolutely nothing that separates these people morally from the Brown Shirts or Black Shirts or any other group of totalitarian thugs.

They are happy to use violence to get their way.

Right now they are just screaming and threatening.

Steve Scalize was shot on a baseball diamond.

What happens when one of these assholes, decides to bring a gun or a knife with them just in case Cruz or some other Republican calmly walks away instead of capitulating to their demands?