How many times do we have to say it, the Left wants to take away your right to own guns, knives, and everything else dangerous because they know they can’t be trusted with them.

Police in Arizona said an 18-year-old woman admitted to slashing the tire of a random SUV because she saw one of President Trump’s “Make America Great Again” hats inside, The Arizona Republic reported Wednesday.

Phoenix Police Department spokesman Sgt. Vincent Lewis said the woman admitted to slashing the tire “because she saw a hat with a political message inside the vehicle which she disagreed with.”

The car belonged to Nick Dugas, a retail security manager, who noticed something didn’t seem right after leaving the parking lot of Paradise Vally Mall.

Dugas told the newspaper that footage showed a car pull up next to his. Four women got out and two peered into his truck, where they reportedly spotted one of Trump’s signature red campaign hats resting on the console.

Approximately seven minutes later, the women returned and got back into their car before the driver and front passenger got out again, according to the newspaper.

The front passenger could be seen scanning the parking lot as the driver squatted next to Dugas’s truck.

Footage reportedly showed his SUV suddenly dropping on the left side before the women got back in their car and left.

What prompted the women to first look into his truck?

They left and came back, one stood look-out while another slashed his tires.

This wasn’t a heat of the moment, burst of anger, act of vandalism.

This was a deliberate, premeditated act carried out by four women.

The scary thing is just how easily this could have been an act of violence against Dugas and not just his truck.

These are some responses.

So God’s work is detroying people’s property because you don’t like who they voted for?  I don’t remember that in the bible.

Where is a red flag law when you need one?

More cheering on this woman.

Sure… fascism like attacking people who you disagree with politically.  I bet this guy thinks that Black Shirts were patriots too.

Another person who needs a new definition of hero.

This next one is my favorite.  I captured the whole exchange. 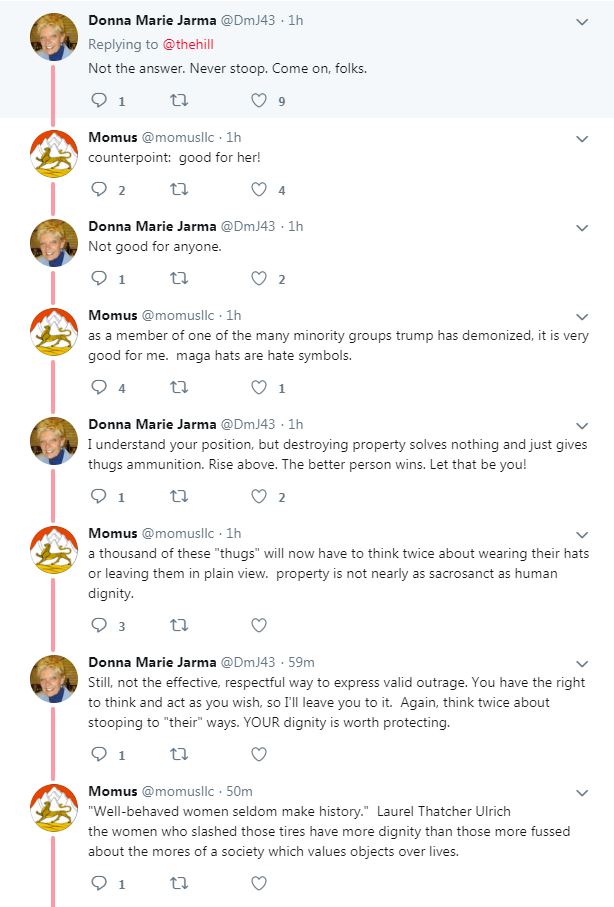 Momus her identifies as a minority.  She has been so offended by Trump’s words that she thinks that committing acts of violence against the property of a trump supporter is justified.  She’s the victim so when people in MAGA hats are hurt, that is a good thing.

She is excited about this because she hopes it will frighten other Trump supporters into subduing themselves.

These people support anti-Trump political terrorism.  That’s what this is, just on the small scale.

Now that Pelosi has dropped the idea of impeaching Trump, as we go into 2020, I only see this getting worse.

Once again, I will leave you with the wisdom of Sgt Maj Basil Plumley.