My two-cents on Bump Stocks

I’m going to jump into this bump stock thing.

To all the gun rights people fighting the bump stock thing, please, from the bottom of my heart, shut the fuck up and let the Feds take bump stocks.

I know, I’m not being nice.  I know I will be accused of being a turn coat on gun rights.

You have no idea what fire you are playing with.

Vice did another good video on bump stocks last year.

I understand all the fine legal distinctions made by the ATF agent and how they came to the decision that they did.

Still, I’m flabbergasted that bump stocks made it past the regulators.

But bump stocks are the least of the NFA fuckery that is going on in the industry right now.

I’m going to refer back to this imaged Miguel posted before. 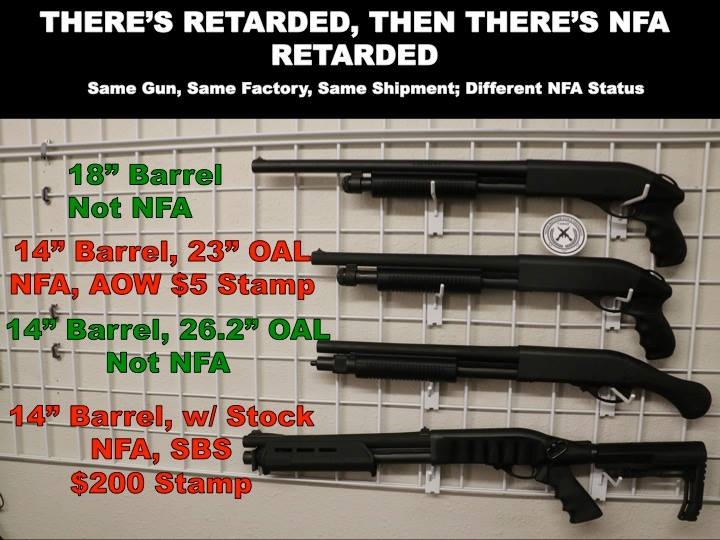 The Mossberg Shockwave or Remington TAC 14 is a 14 inch barrel with a pistol grip and a serial number change.  That’s the key, its not just the overall length of 26 inches and one RCH, it’s a serial number that is not specific to a shotgun or handgun.

Remington sold 30,000 of those before Christmas.  Thirty-fucking-thousand, in three months.

Then there is everything that comes with an arm brace. 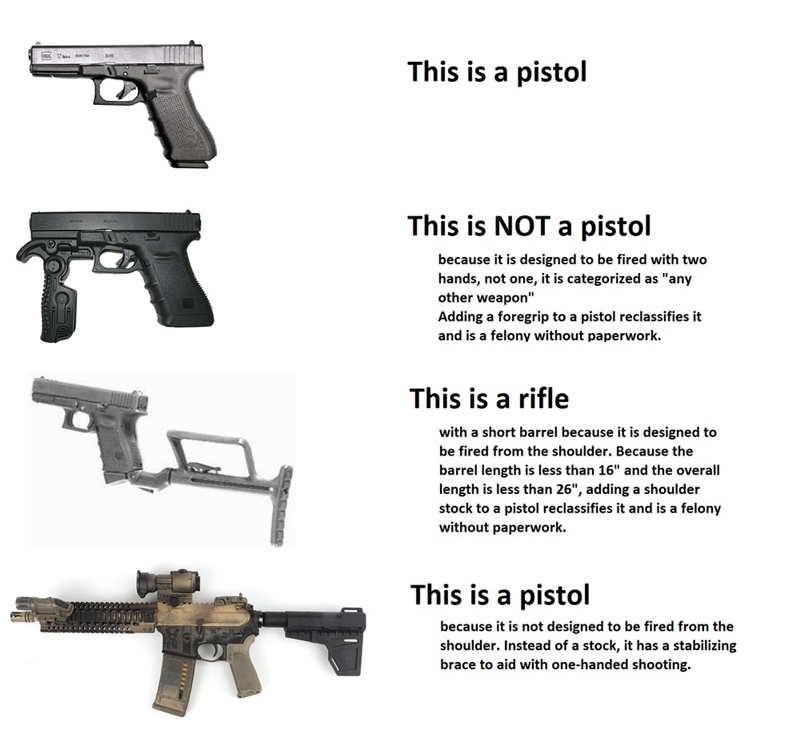 That is more edging around the law when it comes to NFA compliance.

There is an entire world of “how do we get around the NFA without actually violating the NFA” out there.

Bump stocks did that.  Then they got onto the political radar because of Las Vegas.

This is not the first time this happened.  If you went to a gun show in Miami in the 90’s, you would have come across at least two or three tables with a small TV playing this video on a loop.

That was bump fire before the bump fire stock.  Those faded away, partially  because David Koresh outfitted a number of rifles with them, which was part of the whole “semi auto converted to full auto” justification that the ATF used to raid the Branch Davidian compound.

So this shit has been going on for 25 years.

Honestly, I think it is time that the NFA be done away with.  It’s time has passed.  When there is so much stuff that toes the line, it shows how the NFA is obsolete.

Hell, bullpup rifles made the SBR category obsolete.  My 16″ Tavor has the same OAL as my 11.5″ AR pistol, but the Tavor is a rifle and if I put a stock on the AR pistol it’s a felony.  That is dumb a shit.

But here is the way I see it.

Either we can very specifically give up bump fire stocks, which are novelty items for tacticool-retards who like turning valuable ammo into noise…

We can let those stupid, evil fuckers on the Left write a bunch of laws that end the entire “skirt the NFA” industry.

Then, well lose not just bump stocks, but arm braces, “26 in OAL smoothbore firearms,” and a whole host of other stuff.

Since serial numbers is all the separates an AR pistol lower from and AR rifle lower, do you want the anti-gunners to decide that any pistol based off a rifle is now an SBR?

If you want to get really technical, Aguila Super Colibri is quieter out of a rifle barrel than nearly all suppressed guns.  It is not a stretch of the imagination for some Kevin de Leon fucker to want to ban “silent ammunition that gets around silencer laws.”

Ask yourself this question: do you really want  the anti-gun Left to take good hard look at the NFA and start asking serious questions about what is legal and what is not?

Or we can give up bump fire stocks.

The choice is shit and shittier.

Some species of lizards will intentionally lose the tips of their tails to avoid being eaten.

It’s not the best option but between giving up the bump fire tip and having the Left to eat us by putting the NFA under the microscope, I’ll lose the tip.

Don’t be the hard ass who says “you can take my bump stock from my cold dead hands” and gets my AR pistol turned into an illegal SBR.

If anybody ever deserved a through educational beatdown….

I said the Remington Sandy Hood settlement was a bad idea

9 thoughts on “My two-cents on Bump Stocks”