Anti-Cop sentiment: Never interfere with your enemy when he is making a mistake. 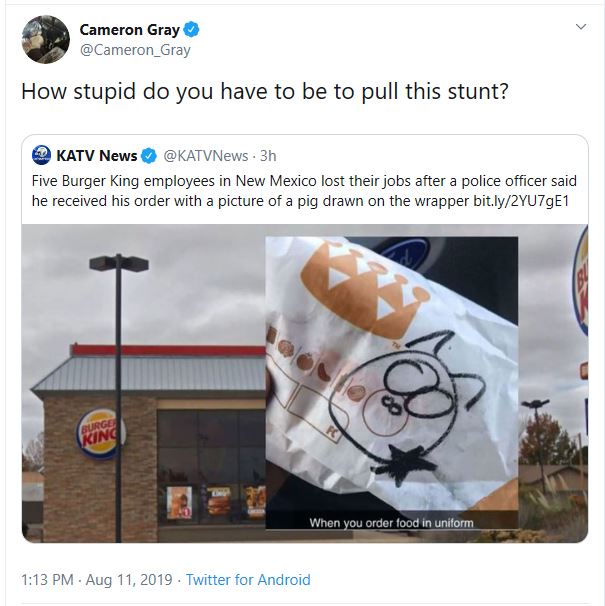 Officer Timo Rosenthal said he was in uniform when he stopped at the Clovis Burger King for food and received the drawing, reports KRQE. He later posted a picture of it on Facebook where it soon went viral.

Burger King says they fired five employees responsible for the drawing, but the officer says he won’t be going back to that restaurant.

This is something Gun Owners need to capitalize on as soon as possible. The Left is on a full-fledged campaign against Law Enforcement and we should be on the side that supports them. Let Liberals generate all the animosity they want against your local cop who is human after all and will remember who treated him/her like shit and who stood in support.

But this strategy will require sacrifice. And it is not being called Cop Groupie and insulted like them (We are being called terrorists, so that ain’t much of a threat) but the sacrifice has to come from the tiny minority in our side who also sport Anti LEO sentiment, mostly because it is Chest Thumping®  fashionable.

Yes, I am asking you to shut the hell up.

Unless you are living in the clouds over Fiji, you realize we are heading for a possible confrontation. Cops will be sent to come after us by people that hate both groups and they are hoping to see a shooting event (or at least see your ass dragged in chains after you kill a couple of the horrendous pigs) sitting in the comfort of home.

But what if the confrontation wanted by the Left can be avoided or toned down to the point of uselessness?  What if we get 90% to flip the birds to the powers that be? What if before  a warrant issued against you for your arrest the confiscation of your firearms, you get discrete text warning you to get the hell out of Dodge? Or maybe even they will serve the warrant to the wrong address.? What if we get enough cops to be our Fifth Colum in the Government? What if gradually the whole train of Liberal Acquisition of Power slows down to a screeching stop because it is not enforced?

And yes, my dear Chest Thumpers©,  there are bad cops and their actions need to be addressed, but also you need to stop the song and dance of  that All-Pigs-Are-Gestapo-Papers-Please-Am-I-Being-Detained? I said it before: Philosophy is not a Tactic. You want real police reform? Be polite to Law Enforcement and make them your friend. Don’t be an asshole that cannot be differentiated from Antifa.

3 thoughts on “Anti-Cop sentiment: Never interfere with your enemy when he is making a mistake.”