New York public defenders cause hell to freeze over

This is something I never thought I would see: 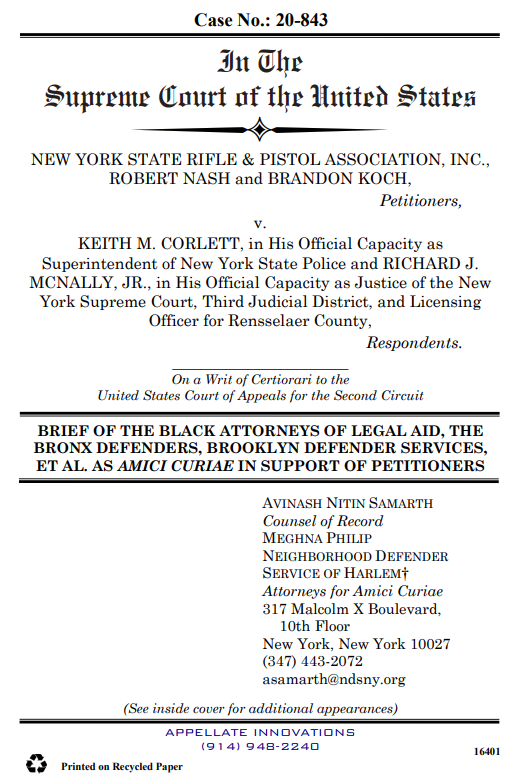 The incorporated Second Amendment affords the people “the right to keep and bear arms.” U.S. Const. amends. II, XIV; McDonald v. City of Chicago, 561 U.S. 742 (2010); District of Columbia v. Heller, 554 U.S. 570 (2008). Despite the clear text and this Court’s precedent, New York’s licensing regime does the opposite. It deprives everyone of that right, only returning it to those select few who manage to first secure a firearm license from the police. For everyone else, possession of a firearm is effectively a “violent felony,” punishable by 3.5 to 15 years in prison. N.Y.

Penal Law §§ 265.03; 70.02(1)(b). New York’s licensing
requirements criminalize the exercise of the fundamental Second Amendment right, with rare exception.  As a result, each year, we represent hundreds of indigent people whom New York criminally charges for exercising their right to keep and bear arms. For our clients, New York’s licensing regime renders the Second Amendment a legal fiction. Worse, virtually all our clients whom New York prosecutes for exercising their Second Amendment right are Black or Hispanic.  And that is no accident. New York enacted its firearm licensing requirements to criminalize gun ownership by racial and ethnic minorities. That remains the effect of its enforcement by police and prosecutors today.  The consequences for our clients are brutal. New York police have stopped, questioned, and frisked our clients on the streets. They have invaded our clients’ homes with guns drawn, terrifying them, their families, and their children. They have forcibly removed our clients from their homes and communities and abandoned them in dirty and violent jails and prisons for days, weeks, months, and years. They have deprived our clients of their jobs, children, livelihoods, and ability to live in this country. And they have branded our clients as “criminals” and “violent felons” for life. They have done all of this only because our clients exercised a constitutional right.

I highly encourage you to read the whole thing.

This is something I never thought I would see, but reading it, I was reminded that these same groups got together to fight to overturn NY’s gravity knife law which was overwhelmingly being used by the NYPD to arrest black and Hispanic workers for carrying ordinary pocket knives they used for their jobs.

It seems like after watching years and years of government abuse, where rich white celebrities and the politically well connected can bribe their way into a gun license, but minorities who had neither influence nor affluence ended up in prison, they came to the conclusion that hyper-restrictive may issue is just a scheme that allows police and politicians to enrich themselves through corruption and oppress everyone else.

I really hope they win.