I took the weekend off to have a mini-vacation, and while I was out the loop, the news turned to shit.

I saw Miguel’s post Explain to me why are we still playing nice?  About The New York Times calling for the Doxxing of ICE agents and Customs and Border Patrol officers.  Of course, for the NYT it wasn’t doxxing, it was public shaming on the internet, which is a difference I am unable to parse.  What the Hot Air article didn’t mention is that the NYT was pulling straight from the Antifa playbook.  It was a year ago, June of 2018, that some people associate with Antifa doxxed 1,600 CBP officers using LinkedIn and other social media platforms.

This morning, Miguel wrote a short post about Andy Ngo, a journalist who was attacked and “milkshaked” by Antifa in Portland.  Ngo had been targeted by Antifa for previous reporting that he had done on them.

The situation is so much worse than that.

“Milkshaking” entered the popular lexicon in May of this year, after Tommy Robinson of the UKIP party had a milkshake dumped on him.  What started out as an impromptu attack rapidly turned into a trend where milkshakes were poured or thrown at right-wing, and only right-wing, politicians, including Nigel Farage, Carl Benjamin (youtuber turned politician Sargon of Akkad), and other members of UKIP or supporters of Brexit.

Very rapidly, the Leftist media jumped to defend this act of violence as something other than violence.

In Defense of Throwing Milkshakes: Why Humiliating Far-Right Politicians Works
Far-right politicians thrive on being taken seriously. That’s hard to do when they’re covered in liquid ice cream.

This article attempts to defend milkshaking with this logical backflip.

But isn’t milkshaking political violence? And shouldn’t violence be kept out of politics, especially if we want to foster civil debate?

Well, maybe technically, but calling milkshaking “political violence” is an exaggeration. While throwing a milkshake at someone might fit the legal definition of assault in most places (especially America, where police officers would likely deem it “assault with a deadly weapon” to justify why they murdered you), the action is more in line with the ethos of “nonviolent protest.”

The difference between violent and nonviolent protest is not a distinction of physicality. Rather, the difference lies in the intent of the action. Violent protest includes any political action performed with the intent to inflict bodily harm on another person. This holds true regardless of whether or not the form of protest is violent in and of itself. For instance, Richard Spencer’s calls for ” peaceful ethnic cleansing” are violent, regardless of what words he chooses to couch that violence in.

Alternatively, despite the physicality of milkshaking, the goal of the act is public humiliation and drawing attention to the ridiculousness of the target and their awful ideas. No reasonable person would argue that milkshaking actually results in bodily harm, so the question isn’t so much whether or not milkshaking is violent; the question is whether or not public humiliation should be considered a valid form of political protest.

See, it’s not violence because it’s not really supposed to hurt people, just sort of make them look foolish.

The New Republic said something similar.

Why Milkshaking Works
The far right fears nothing more than public humiliation.

What these critiques misunderstand is why milkshaking is so potent against Farage and his brethren: It humiliates them. Nothing animates the far right or shapes its worldview quite so much as the desire to humiliate others—and the fear of being humiliated themselves. It’s why alt-right trolls, projecting their own sexual insecurities, enjoy calling their opponents “cucks.” It’s why they rally around blustery authoritarian figures like Donald Trump who cast themselves as beyond embarrassment, shame, or ridicule. They brandish humiliation like a weapon while craving release from it.

Getting doused in a milkshake robs far-right figures of the air of chauvinistic invulnerability that they spend so much time cultivating. They hunger to be taken seriously despite their racist views. They want to be described as dapper, to be interviewed on evening news broadcasts and weekend talk-show panels, and to be seen as a legitimate participant in the democratic process. Most politicians to the left of Enoch Powell would brush off milkshaking as a harmless stunt. For those seeking mainstream legitimacy, it’s another searing reminder that they don’t belong.

This is rhetorical bullshit.

The issue with milkshaking isn’t that the politicians who get milkshakes dumped on them are humiliated, it is that they recognize that it is a gateway drug to more aggressive forms of violence.

How to Make the Perfect Milkshake for Throwing at Fascists
Combining the public humiliation of racists and one of nature’s most delicious frosty treats is pure poetry in motion.

Carlos Maza is a producer with Vox Media and is best known for crybullying YouTube into demonitizing Steven Crowder and a number of other conservative talkshows.  You can probably imagine is his take on milkshaking. 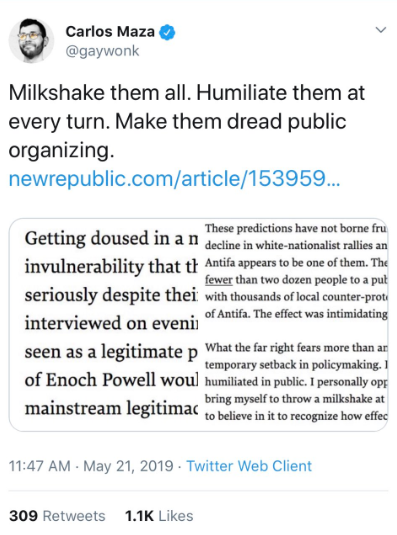 It’s not just about humiliation, it’s about driving any opposing voice out of the public square.  It is about turning a desert into a weapon against free speech.

It is not just the Leftist media advocating milkshaking, woke corporations are doing it as well.

When McDonalds in the UK was asked to not sell milkshakes during a protest in areas nearby, this is how Burger King in the UK replied. 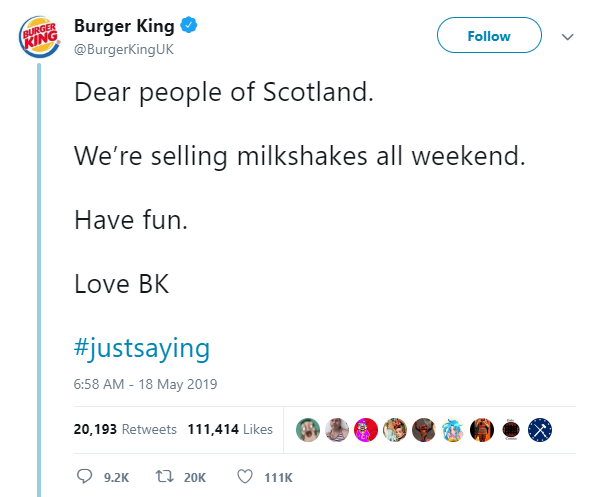 With a wink and a nod to violence.

So that brings us back to Andy Ngo and his situation in Portland.

Antifa jumped on the milkshaking bandwagon with gusto, handing out milkshakes to other Antifa protesters. 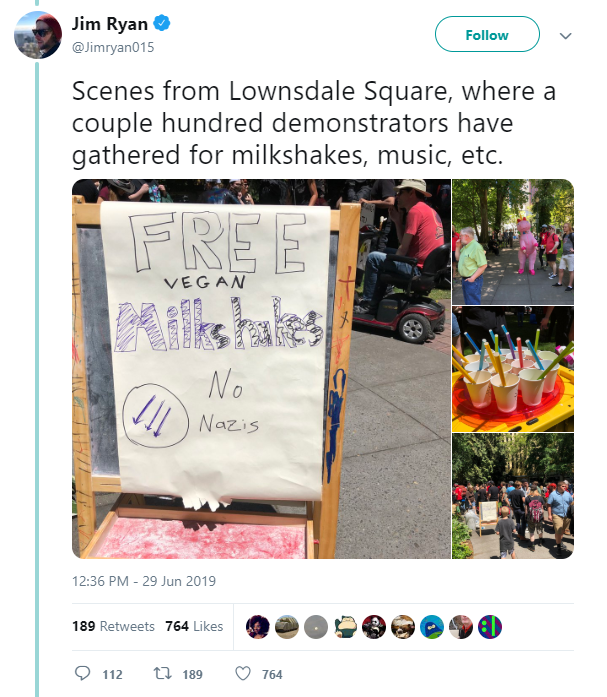 And in video format:

Milkshakes for protesters at Sixth and Morrison. pic.twitter.com/ZWkuBzf1TF

Enter Mr. Ngo.  Here is the video of him getting milkshaked, which opened the door for more violence.

First skirmish I’ve seen. Didn’t see how this started, but @MrAndyNgo got roughed up. pic.twitter.com/hDkfQchRhG

In true Antifa style, it turns out these were not ordinary milkshakes.

Authorities believe some demonstrators during the noontime action threw “milkshakes” that were actually cups filled with quick-drying concrete, a powder-and-water mixture that can set in as little as 10 minutes.

“Police have received information that some of the milkshakes thrown today during the demonstration contained quick-drying cement,” the Portland Police Department tweeted. “We are encouraging anyone hit with a substance today to report it to police.”

This is how milkshaking turns into hospitalization for head trauma.

Immediately the radical Left rushed to defend throwing liquid cement at people because of their political views.

Author and Hugo Award winner (boy how that award has fallen since the time of Robert A. Heinlein) Sarah Gailey decided to Tweet this gem of ignorance. 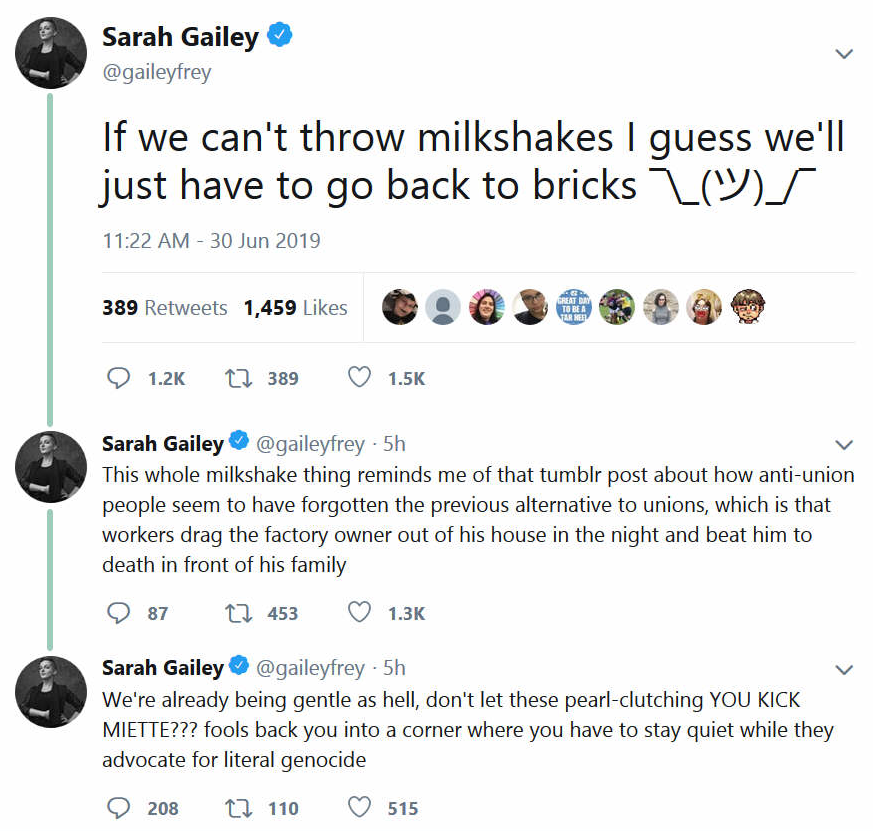 See, we have to let them throw milkshakes, liquid cement, and use pepper spray or they will be even more violent.  We have to adjust our expected norms to allow the far Left to use some level of violence to intimidate and drive us out of the public square because if we don’t they will be forced to kill us to silence us.

Note the second Tweet in the thread, the one about the unions.

Maybe she forgot her union history.   I didn’t.

When the unionizing miners got violent in Ludlow Colorado, the mine brought in some Baldwin–Felts Detectives to open up on the miners from the back of an armored car with a couple of Colt 1895 “potato digger” machine guns.  Then they lit the miners’ tent city on fire.

This was because the Baldwin–Felts Detectives didn’t want to lose the way the Pinkertons did when they (the Pinkertons) were called in to break the Homestead steel mill strike, but were too afraid to shoot the workers.

Nothing breaks a strike like cutting people down with .30-40 Krag at 450 rounds per minute, then lighting them on fire.

And this is my point.

They know that it starts with a milkshake from McDonalds and quickly ramps up to chemical burns and head trauma.

They want us to cower and run away at the milkshakes, with the promise that if we don’t, they will use more force.

They want us to accept that low-level violence is just part of their movement and we cannot complain or say it is unfair, or they will be more violent.

That can only go so far.  At some point, there will be pushback.  When it does, think a modernizes version of the Baldwin–Felts Detectives with Colt potato diggers.