Not true but it is accurate.

Newsweek is not even bothering to disguise much their left-of-Castro politics and barely dusts a layer of “accuracy” to cover for they cheerleading of the Democrats. 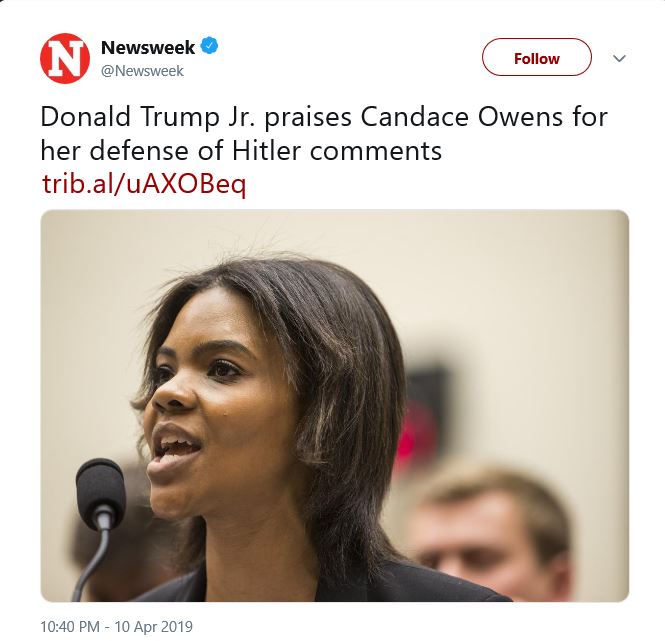 Ms. Owens was “captured” on a recording praising Hitler according to the Left, only to be revealed that it was an edited version of what she had said with a question removed. She was not happy when Senator Lieu (the same one with a donor who appears to be some sort of serial killer) played the recording and then did not bother to give her a chance to respond. It took Senator Reschenthaler to give her a chance and then, fireworks! So in a very roundabout way, Ms. Owens defended herself from the “Hitler comments”  question and the President was right on congratulate her, but that was not what the headline tried to convey: “Trump defends Hitler Groupie”

The erosion of trusts in the Media was brought up by themselves when they could not understand they no longer controlled the access of information to the public. Yes, they are loud and yes, they have reach, but amazingly they get to die in the medium to short run because other sources can be accessed and the “news” they published fully examined and criticized if untrue.

I don’t feel bad that newspapers are collapsing and journalists can be found slinging coffee at your local shop. I do not feel bad for the eternally money-losing news divisions of TV networks that have to depend on the ratings of a Sit-Com to have a budget. I believe both will disappear within 20 years if changes are not made, changes that are not complicated but hard to implement and begin with one simple idea: Respect your consumers.

4 thoughts on “Not true but it is accurate.”